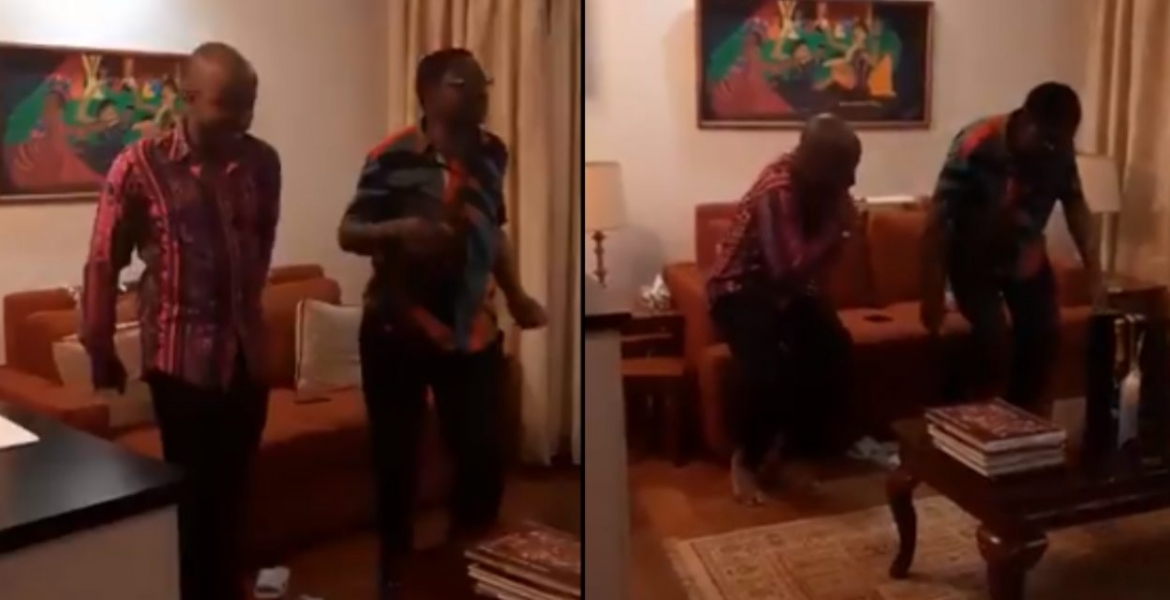 A video of Siaya Senator James Orengo engaging in a dancing competition with his son has moved Kenyans on social media.

In the video clip, Orengo and his son Michael are seen dancing to Susanna, a hit recently released by Kenyan music band, Sautisol.

Michael shared the hilarious video of father-son dance on his Twitter page, daring anyone to challenge them.

Here are some of the reactions from Kenyans.

@bobo36676095 quipped: “Such a beautiful father/son dance @melitaholdings how about such with your boys.”

Orengo, who is also the leader of minority in the Senate, celebrated his 69th birthday on February 22nd.

A good example of building, rebuilding or maintaining a relationship with your kinds. I was raised by a very mean dad whom I feared throughout my young age. I did not had a sit down with him until I was 44 years and it's was still full of drama as he likes to say and not to he told. Typical of ukuyu man who cannot wipe his children nose but always ... thii kwi nyukwa! Unfortunately the same behavior is inherent to the so called young generations or the so called modernised generation. Nii ndingitigirwo mwana. That's ukuyuman nonsense up to date.

Parents are supposed to be parents and not friends of their kids. With friendship to your kids, you damage that parental space. Your kid does wrong as they always do; and you cannot punish the kid since you fear damaging kid/parent friendship. In short, I support actions of your father.

@Sokora, be friend to your kids does not mean you stop being a parent. When you are friend to you kids. They will tell you all that is going on in their lives. If they are not free with you they will seek advice from the wrong sources where they feel free to open up.

Parents should parent when kids are young but when they are old the relationship changes and it's more friendship.

Deal with your daddy issues and let the rest of us who were raised by 'ukuyu' men of honor be.

Pole but not all kyuk men were like your dad. My dad shaped me to be who I'm and in a very positive way, a kyuk man with lots of pride, discipline, no nonsense and taught us girl children how to be capable of anything we attempted and give it our all and never give up. Same with my brothers, great men many years later and boy even though the dreaded cancer took him, he forever shapes our lives. So stop trashing all kikuyu men, and hope you reconciled with your paps.

My father was mugikuyu. He educated all of us, daughters and sons. He didn't spare the rod when we were little children but he used it sparingly. When we could finally reason he switched to reasoning. The man introduced me to 007, nyama choma etc. When we were old enough he pulled the boys together and engaged in a discussion to steer us from violence against women. He was not perfect but on balance the good outweighed the bad. I model the good and try to avoid the bad with mine but I make mistakes. You will get old, if all goes well, and you will regret not being able to talk to your now adult kids. He is gone now, but what I wouldn't give to sit with him again. Being ukuyu did not make your dad mean, that was his nature. I grew up with others with even less stern fathers. Most of us turned out ok. Msamehe. Hasira hiyo itaangamiza roho yako

Love love love this father son duo such a joy to watch over and over again. Music/song on point too. Jammmin into joyfulness worldwide.

Meeeeee, i hear you.I know exactly what you mean.They acted like Kings.You could hear a pin drop to the floor when they enter the house.Owe unto you who did something and he remembers..this will make all househood sleep outside that night.Nkt, was this really love or slavery?

Eish! A simple dad/son comaradarie brings out tribe again...its an individual thing NOT a whole society NKT like the Y-generation. Is apt to say.....

I think that is so cute of them. They are both handsome young men and have a great relationship with eachother. They are also in good health aswell. #KeepLovingEachother #FatgerandSon

Times have changed,and some of us have learned better ways to parent,or interact with our children.
I have many Kenyan friends who were brought up with viboko,and wazee who would not show love emotions toward them,but will not dare use the same discipline method on their children.
You can be your child's friend but draw aline where fatherhood starts. For example, I would not think its appropriate for your 16 year old son to talk to you about how many girls he would like to bed.But Iam sure as afriend that might fly.
Anyway, I dont know how old Orengo's son is,but if they are all adults,they are then operating on a different level- iguess as equals papa,son relationship withstanding.It is the relationship you inculcate that matters.Is it mutually beneficial? Socially?????

I use to admire orengo the lawyer growing up as a kid n i wanted to b like him but later in life especially when he joined mchawi rao with 42 against 1 campaigns,mondays teargas calling for wars/killings of other kenyans n engaging in no raila no peace stupidity i dismissed him??Madomo mingi niyaunjinga kwa watu wengine.Today such pple r disgrace in our society's.Politics shouldn't change your stands in law.As a lawyer u shoukd always b principled in matters law whether ur in opposition or gavament.Not supported law when it only suits you.Thou the guy can dance hapo i give him A

Dad is Smoove <3! Son is too. He look a lil shuck tho cuz Dad got that "ladiesman"rhythm. Lol

It was very impressed to watch