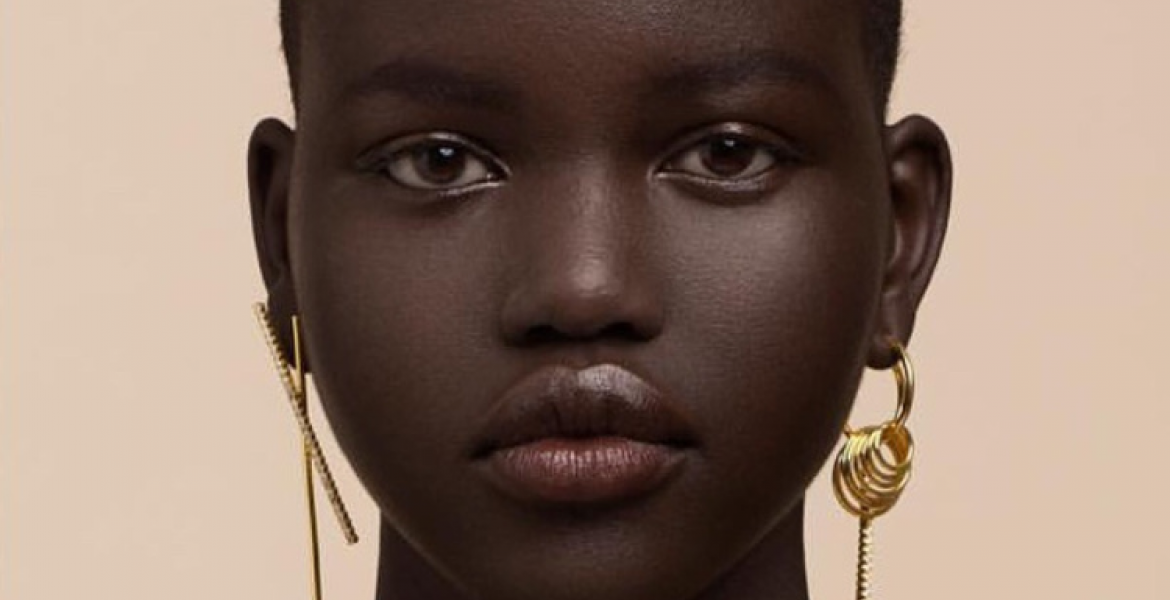 A former refugee in Kenya, Adut Akech Bior has made her name in the Australian beauty industry at the age of 18.

South Sudan-born Akech was raised at Kakuma refugee camp in northern Kenya before she moved to Adelaide, Australia alongside her mother.

She made her debut as a model in 2017, a few months after she graduated from high school in Adelaide.

Recalling her life at the Kenyan refugee camp 10 years later, Akech says: "Certain vivid memories linger: the scorching yet still comforting heat of the African sun, the rich brown color of Kenyan land... and most of all, the carefree laughter and pitter-pattering footsteps from children like myself, never ceasing as we danced in our own little universes."

"As I ran through the grounds of the camp day after day, I remember being met with smile after smile," she adds.

She says that her aunt is the person behind what she has become today.

"A long plane ride landed us in southern Australia, where my aunt, who painstakingly petitioned for our future in this new home called Adelaide, welcomed us with open arms," she notes.

She has also featured in several editions of Vogue Magazine in Italy, Korea and the United Kingdom in addition to appearing in major advertising campaigns in the beauty industry.

"My career as a model makes me a nomad by default. My home is now in multiple places around the world, my life is an arrow constantly pointing forward," she says about her life in the beauty industry.

I would hope next time Kenya has a beauty pageant it will have those who truly represent the Kenyan beauty and not half a** Kenyans of vanilla color. I say this knowing there is a fine line between modelling and beauty pagents.

You are full of it, nobody said she is representing Kenya. Kenya is only because she was in a refugee camp in Kenya. Nobody has stopped Kenyan women from competing.

Oh whoa, what a beauty!Perfection

Folks, with all due respect to this beautiful, young lady, please educate me on exactly what beauty is all about? Is it about the facial features? Is it about the butt, the belly, the hands and the legs? What parameters do they use to determine that one woman is more beautiful than the next one? I rarely see an ugly woman (or maybe I am blind??) After all, beauty is in the eye of the beholder, right? I find beauty parades the highest forms of stupidity, excuse my language.

And for the menfolk, we all know what those considered most beautiful everywhere "taste" like....

Beauty is on the eye of the beholder.Whatever turns anyone on I suppose! There are certain people who have a certain "Je ne sais quoi", and this woman is one of those to the modelling world. To sell anything you have to package it and make it appealing( You are in biashara you know that) , that is what modelling industry is about package the men and women and sell makeup, clothing , or whatever the product. Now does that mean they are beautiful on the inside, that is chapter 2 in case you interact with them. I have to say there certain men who walk by me or in same room in a party or whatnot and its like damn but in the end dumb and stupid but there others who are not appealing at first sight but may end being the nicest people. Even in the jungle, for instance, peacocks use feathers to attract pen hen, the peacock with showier feathers wins the day,so see aesthetics attraction is to being human and animals too. I'm glad to hear you find all women beautiful:-)

I hear you loud and clear @Mlachake. Those beauty parades, my God!!! What about the processes they go through to become, to say the least, they are so INHUMAN and so UNAFRICAN my heart weeps....no wonder this kid is fighting depression - and most of them do.

Surely Mzungu knows how to manipulate as africans/blacks.I stand corrected,but I bet you many africans would go for a light skin as beauty.
This girl/model is beautiful no doubt.,But when it comes to modeling my take is that the standard is not the same as that of the general public.As formerly guest2 eloquently said-Its all about "packaging.Its all about superficial appearence.The person could be as dumb as the door doornail...
I personally would not look at her twice.For the simple reason that, I love afew poundage on the skeleton,where ther yellow, red,or rainbaw color. I guess there goes loss of revenue from me,but Iam sure the slack will be picked up be someone else...

"...I personally would not look at her twice.For the simple reason that, I love afew poundage on the skeleton......"

Surely Mzungu knows how to manipulate as africans/blacks.I stand corrected,but I bet you many africans would go for a light skin as beauty.
This girl/model is beautiful no doubt.,But when it comes to modeling my take is that the standard is not the same as that of the general public.As formerly guest2 eloquently said-Its all about "packaging.Its all about superficial appearence.The person could be as dumb as the door doornail...
I personally would not look at her twice.For the simple reason that, I love afew poundage on the skeleton,where ther yellow, red,or rainbaw color. I guess there goes loss of revenue from me,but Iam sure the slack will be picked up be someone else...
Hey does anybody notice that she bears some facial resemblance to Lupita ?

Maxiley, let it go. This has got nothing to do with mzungu manipulation. She is beautiful & gorgeous and encapsulates African beauty in a nutshell. Mind you, she is 18 and I am yet to see an UGLY 18 year old. In the words of Salim junior or is it Kamaru? Most look like a plumb tomato in the morning dew...…… Lakini, I am no dude, so can't comment on what you lot define as beauty. Just saying.

@ Sukari, I am sure you are not arguing that most african men,and even women would look at light skin as more beautiful as opposed to the darker shade...I dont know if you are familiar with Nyakim Gatwech another dark skinned Sudanese model?She has been told to bleach her skin but refused saying," Dont let american standard of beauty damage your afrian soul".Many of the criticism come from blacks.That's why I said mzungu is manipulating us.Mara black is not beautiful,them he comes with the beautiful dark skinned models.I bet you its not the blacks who are putting her on the cat-walk.

Maxiley..time has come for each to own their truth. I have never had such self loathing as you describe and never have I looked at someone lighter than me as superior. Having said that, I have witnessed our people define beauty by how light, well endowed, large bossomed or behind.. the list is endless is. I say each to their own. She is on the catwalk because of a mix of circs, i.e - her captivating looks, unblemished dark skin, etc. If models were just defined by their pigmentation, heck, the West is a myriad of all colours! Max, all I am saying is the girl is a beauty and as a woman, her looks jumped off the screen! The Mzungu is not manipulating my perception and I refuse to continue blaming the mzungu for all the ills of our society. It's about time we woke up and own our self created sh**t! How long will we continue to bemoan the mzungu manipulation? If we start to stand up for our ways of life, culture instead of aping the West, then perhaps we can win the battle, but as long as we ape everything West, try to change our appearance to resemble the whites, then we can't keep harping on with the same come back of being brainwashed. The girl is beautiful because her African features are just so. What you and the rest of the Toms, Dicks and Harrys find attractive is on you, not the mzungu.

@Sukari.We are on the same page sister.

Amen sister girl, preach on ! I sometimes wonder which African people some of us have encountered, but the woman I hang out with , in my family , honestly love their Africanism , blackness the whole nine yard and we range from light to extreme dark . These are women who do not date Mzungu for his whiteness , but his intellect and other characteristics. I have encountered mzungu men for many years but I treat them as I would treat my African men - is he worth it, let me work it? Simple, there are many Africans who do not emulate mzungu even here in Diaspora , in fact the more I meet Africans , the more black-chic-worshiping white-men, the rare it becomes. The girl is earning her keep, let's freaking leave it at that. How many of us are slaving in jobs here owned and controlled by mzungu, enuff said!