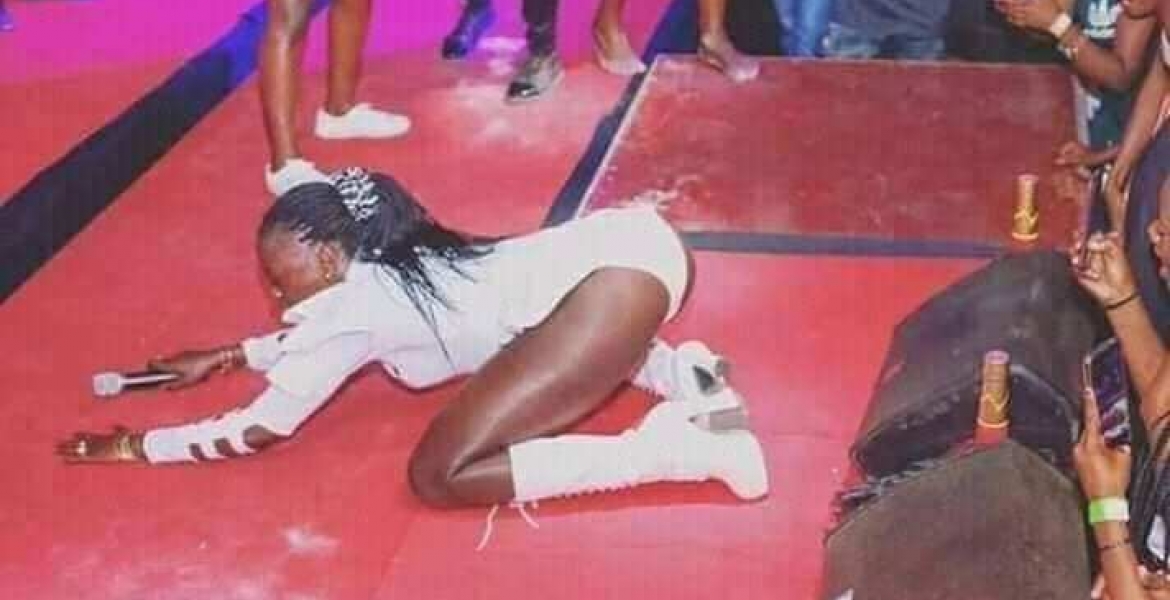 Kenya Film Classification Board (KFCB) CEO Ezekiel Mutua has lashed out at controversial musician Esther Akoth alias Akothee after dirty photos of her during a performance went viral online.

The singer has come under strong criticism from Kenyans online over stunts she made during a performance.

In a post on social media on Sunday, Mutua better known as the Kenyan 'moral police' has condemned Akothee over what he describes as "filthy and stupids stunts."

“Kenya has got talent but as long as we keep celebrating this kind of madness, our entertainment industry will never grow. Akothee is talented but the filthy and stupid stunts she has to pull to remain relevant should concern all of us."

“What’s worse is to see grown-up men and women celebrating this scatological obscenity in the name of entertainment,” says Mutua.

Mutua says that musicians like Akothee can't be role models for young Kenyan girls and terms her behavior as demonic. 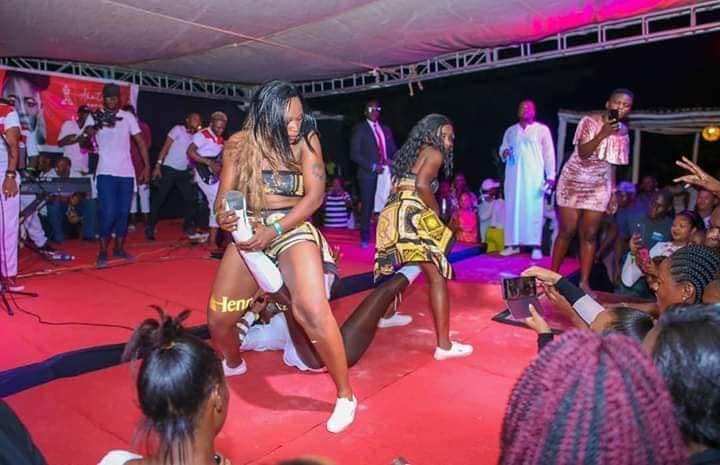 “People like Akothee cannot be the role models for our daughters. Music doesn’t have to be dirty to sell. How I wish artists like Akothee would know how much influence they have on our youths and try to use that influence to produce content that is edifying."

"This kind is crass, moronic and a theatre of the absurd. It’s demonic to the core and only appeals to debilitating and incorrigible perverts and brainless audiences,” hard-hitting Mutua notes.

“Akothee must stop this idiosyncrasy. There’s no dignity in this crap either for her or even her audience,” concludes Mutua.

Akothee is a don't care. When you are a mother of 5 children. You have to think how your actions will affect your children. Children will be bulling her young 2 sons that they saw their mother cuucuu or whatever they call it in at that age.

Mutua should note that our current society is twisted! Those are the complaints Cardi-B received initially but because of the craziness in this generation, she's become the most popular and high rolling music superstar for 2 years in a row! The golden days are gone people. It's called Freedom of expression, no one ain't gonna stop her. Sad but true.

Hey Mutua, get your mind out of the gutter.I dont believe that the moral police watched the clips with disgust...This is adult stuff,and I dont see anything wrong with it for adults who chose to watch. And as for kids watching,where is mom and pop?
I hope that parents are the role models for their children,and thus would not necessitate the need for the likes of Agothee to be role models.Come to think of it is she really a role model?

How is his mind in the gutter, when you see this disgusting grinding, this is not entertainment , this is stripper joint stuff and it is a free society for Mutua to call it out, just as Akothee if free to show around her vajajay everywhere.

Mutua himself have a mpango wa kando whom he is " DISGUSTINGLY GRINDING" as you said in darkness! Is 's that hypocrisy or immoral? Can we call that out too? I am not condoning what's happening here, but her act is legal. Why would be be watching anyway if he wasn't curious? He can go t Eastleigh and watch women in buibui all day and award them moral certificates.

Where was the performance?
If at an X-rated club, customers did not get their money's worth.
Any other place, very inappropriate.

If this is not a teaching moment for a parent to minor, I don't know what is. Keep shielding your kids from this stuff and their friends are too eager to teach them. I wouldn't watch her stuff either in person or online but I defend her right to do the splits as she wishes.

A mother with girls who will once see this or have already seen this,disgusting !

Do you agree that there are adults who don't think its disgusting?Whose standards should we use?.BIBLE?

I'm classy I dont frequent twerking ghetto joints they are disgusting, have I answered you? A woman of substance doesn't show her vajajay and ass ovyovyo.If that is your thing, good for you but don't question what I find disgusting, my prerogative

Never been to those joints either.Iam just advocating for those who go there. Morals are on a sliding scale.Somebody else might do what Agothee is doing for practically free,and think nothing of it.By the way how did you form the nortion that gyrating is disgusting,just curious?

@formerly guest 2,what exactky is disgusting here?may be i dont get it.

On this one, I am with you Maxiley. I don't care for the woman or her antics but support her right to display her vijayjay as she wishes. It's my job as a parent to tell my children about the consequences of such behavior, not to shield them. It never works.
I am not surprised about a recent study which concluded that nations that lean liberal have less teenage pregnancy and young people start sexual activity on average 2 years later than supposedly Christian majority countries. The only reason why Muslim majority fared better is because of the consequences of any perceived sexual behavior. Comparison was between Scandinavian countries and Christian conservative regions of United States.

I am having a field day! Give me another one Akothee.

Wasn't she performing in a strip club, meaning only adults were watching? If so what is the hullabaloo about? If am wrong, I am willing to be corrected.

@ Anos,that's what ithought. I bet you a million dollars, it was not in a place of warship if you know what I mean.

Any kind of work is WORK. if that how she makes her living, it's what it is. You go to your office and ask for chai thinking it's morally right, she go to her job and you pay the rent to watch at least its optional to watch/pay. Asking for chai or stealing is immoral.

Its the audience. And the rating.
She can choose to entertain with an X rating. Strip to the bone and wiggle all you want.
Go XX and entertain with live sex on stage.
If the audience was GP, then this was inappropriate.
Mr. Mutua, introduce a rating for such shows and have it passed in parliament. Then you can legally regulate all such performances and enforce the law with most of our blessing.
God speed.

FG2, this is the same woman whose adult daughter was calling her a bitch and she to her! I agree with you and Mutua, this is immoral behaviour and should be confined to strip clubs. I remember the days where we were clear which mindset we belonged to. For those who wanted decent, there were places to hang out. For the other half who were clearly kinky and had insatiable appetites not satisfied by their other halves, they had the likes of a some reputable clubs where all sorts of filth went on. Looks like it's now on the streets for all to see...children, elderly, no one is spared. @Maxiley, when you say we are brainwashed by the mzungus, I would argue this kind of behaviour was never an African one rather aped from the West. Where do you stand on this one?

Thank you sis for seeing my perspective, no one was saying Akothee cannot spread her legs wherever she wishes to but go to where that belongs not on the street but clearly wale wanapenda that kind of entertainment missed that point clearly.

@Sukari,men like watching shapely women.Its part of part our evolutionary psychology. Its essential for reproduction. This has nothing to do with mzungu.Where mzungu is applicable,igave always indicated.Now women gyrating is nothing new.It has to be done in a socially acceptable way. That's all.You also have to factor in age.If Agothee at 75 was doing the same gyrations,the outcry would be worse,even if it was in an adult entertainment place.Bottom line.time and location.Mind you this kind of thing like porn,or swinging is not for everyone.

Maxiley, that's not what I call gyrating and yes, I agree gyrating is not new but in Kenya or other parts, it was done in style and suggestive rather than rub the damn thing in your face, i.e chakacha.... I see she has clapped back at Mutua stating she earns her keep by opening her legs! We do have a name for such women in such professionals, right? Clearly, she has a swipe card machine between those legs! Sw..w..i..pe!! Just don't key in the pin in case those finger end up elsewhere and in this age of "me too" you could find yourself in a whole lot of mess! The woman is not a teen, so quit making comparison of a 70 something woman.

@ Sukari,do we agree that it's all about sex.If we do then why did human being begin to regard sex as something "dirty ".Or is this just my SCIENTIFIC mind at work doing one of its duties QUESTIONING.It would be nice if we did not make big deal of this beautiful act.

@Maxiley, I will not begrudge you your vice, but allow me to air my repulse in equal measures. In the words of Mohammed Ali, precious things are hidden deep and away from sight... one has to work hard to find them, i.e precious stones. As a woman, I view my body and that of my sisters with the same mindset. As a man, I don't and can't imagine what goes through your mind, so enjoy and loose yourself between those endless legs of our sister. Do write about your experience when you swipe your card!

@sukari you really want me to write about my experience?

Do please, go for it!

I was at her show & the only thing that she needs to deal with is at least shave her overgrown grey hairs blocking entrance around her swipe card machine!