Brookside among 20 Companies Blocked by Tanzania in Export Row 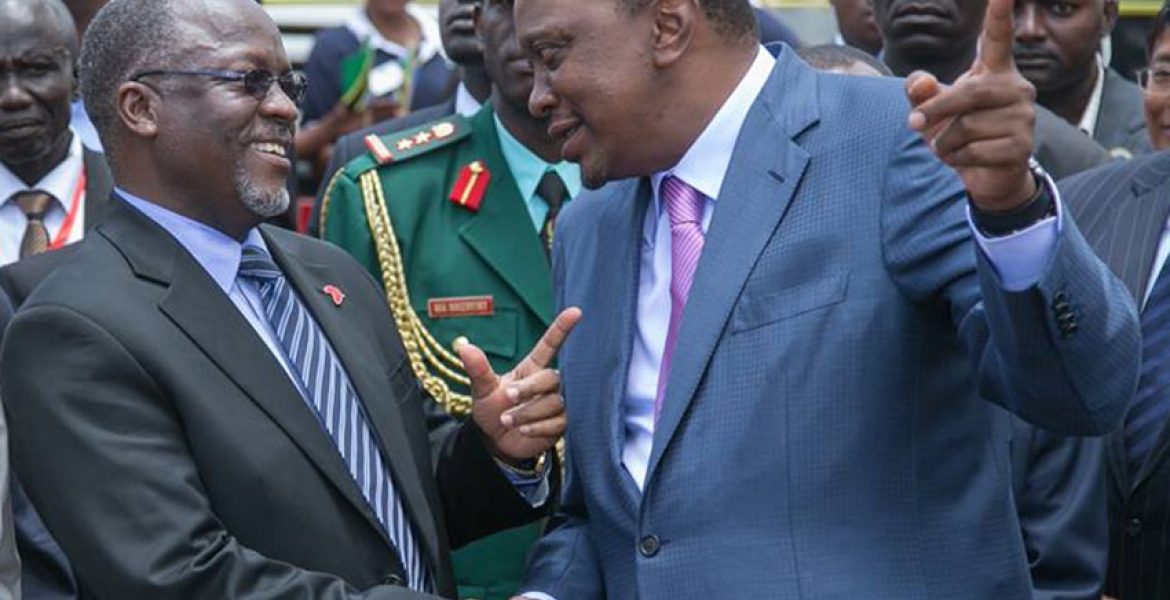 President Uhuru Kenyatta speaks to his Tanzanian counterpart, John Magufuli at a past event

Brookside Dairy, a company connected to President Uhuru Kenyatta's family is among 20 Kenyan companies that have been banned from accessing Tanzania market, despite last week’s deal that lifted export restrictions between the two countries.

New KCC, cigarette manufacturer BAT, all the cement makers, Vivo Lubricants and Bidco Oil Refineries are other companies whose products have been blocked from entering Tanzanian market.

Kenyan exporters said that they have suffered huge losses after perishable products, which require quick sale went bad in their hands. They have asked the government to seek clarification from President Magufuli’s administration as to why Kenyan exports are still being blocked.

Kenya had banned importation of cooking gas and wheat from Tanzania, citing quality issues, while in return Tanzania imposed a restriction on unprocessed foods, milk products, and cigarettes from entering TZ from Kenya.

Kenya Association of Manufacturers (KAM) on Thursday said that Kenyan exporters were being frustrated by Tanzanian authorities, despite last week’s agreement.

“We have received complaints from our members reporting that there still is a total blockade when it comes to accessing the Tanzania market,” said the lobby in a statement.

“Some of the products like milk and margarine are perishable products with a very short shelf-life,” said KAM said in its protest note.

This blockage will REDUCE Brookside Milk prices in Kenya.

It looks like magufuli is being adviced by Raila his friend to remove anything with Kenyatta's name out of his country. This is what Raila maendeleo would look like. Business owners be warned Raila is coming to destroy all you have labored, weather your are in Government or not. He has said he wants to put rent controls like the buildings built themselves for free. And he wants all people who own lands in masai land thrown out!!! Is this the kenya you looking forward to???. Raila is just coming to terrorize the country and it's very unfortunate!!!

Maghufuli HATES the Corrupt and Their Corruption (even Tribalists and their Tribalism).

Note:
Spare the Rod; Spoil the Child. And Maghufuli is NOT ready to Spoil any Child.

Tanzanian's working in these factories suffer too.It not about the kenyans but his nation as a whole.Only common sense is needed here.

guest. Afadhali Mboga Halisi kuliko Nyama Haramu. And this is why Maghufuli does NOT want His Country Thriving on Kenya's Corrupt People and their Corruption (at the Expense of poor Kenyans) like Uhuru.

Note:
Why should Kenyans lack milk while its bring syphoned out the country (even at Exploitive Prices to Kenya Milk Farmers).

Also:
Tanzania Farmers NEED Domestic Market for their milk (and NOT Kenya flooding theirs into Tanzania leading to Denial of Income to Hardworking Tanzania Dairy Farmers.

Tanzania's who work in these factories suffer too. He is not punishing kenyans but his nation as a whole. All that is needed is common sense

Tanzania's who work in these factories suffer too. He is not punishing kenyans but his nation as a whole. All that is needed is common sense

The country Tanzania is 24yrs behind Kenya;Let's look for other markets n see who will suffer more!Mafuguli should remember Mount Kilimanjaro was Kenya n we can ask for it.Nyerere was given as a gift so if this mafuguli idiot continues with the same raila mentality then we can quit doing biz with him?