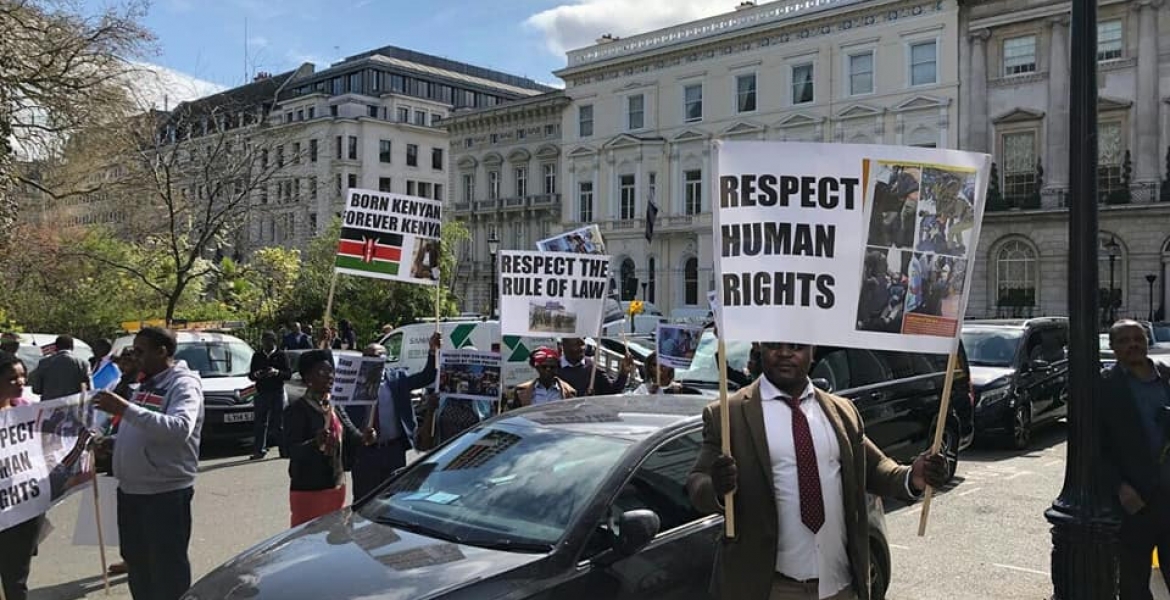 A section of Kenyans living in London, United Kingdom held a demonstration outside Chatham House, where President Kenyatta delivered a talk on Tuesday.

The President issued an address at the house associated with tenets of democracy, addressing a number of issues including his plan for Kenya in his final term and last month handshake with Opposition leader Raila Odinga.

Speaking at Chatham House, Kenyatta assured Kenyans abroad that they will be allowed to vote during the 2022 general elections.

“By 2022, all mechanisms will be put in place to ensure that the entire Diaspora (population) will be able to participate in the general election,” said President Kenyatta, who was responding to a question by an accountant living in the United Kingdom.

He also talked about the political implication of his handshake with Opposition leader Raila Odinga. “It is a Kenyan agenda that we [Government] hope to deliver [development and a conducive environment for business] to the people; and we acknowledge that we cannot do it on our own; we need each other. We should not keep our people engaged in politics 24 hours,” he said, responding to a question from an audience member.

The group were demanding their share of shs 25b.bribe/loot given to their god,Raila.Hamupati kitu.They should forget any gains in economy with the constitution as it is.You passed the useless constitution to take corruption to the grassroots NA HIVO NDIVYO ILIVYO.Pole sana bongolalas for passing a constitution of 3000 bosses,from MCA upwards.

We can see that all ten of you came out strong to display your ignorance thousands of miles away from home. Sorry, no stone throwing around here because judges in London are not for sale and anticipatory bonds are unheard of. You see, our new dispensation in Kenya comes with a caveat, we have a balance of power which simply means, if your cousin Ondunga spits out court orders as dictated by Orengo, Kenyans will just ignore them because they're not stupid and because we have a balance of power. You can't get smart with us, we'll call you out. If you really want to help, come to Kenya and get real.

Let them deliver what they promised.

Sprinkling of Kenyans to be precise. They are still in denial that they were used as negotiating "currency" and now their job is done. Unfortunately, they are the last to know that the ship has sailed and the horse has bolted from the barn.

Betrayal in the city is a perfect tagline for this picketers. I think they need to read this book over and over until it sticks in their medulla oblagata before exposing utter ignorance for all to see.