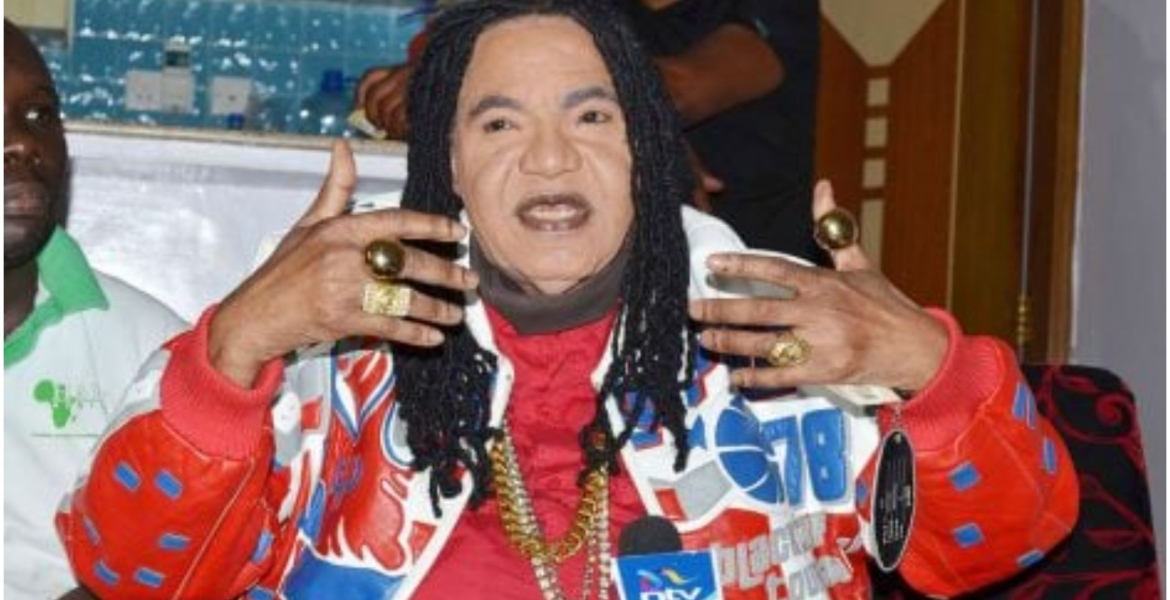 Defao is said to have lost consciousness while in his hotel room in Douala, Cameroon on Monday and was rushed to Laquintinie Hospital where he died.

Reports indicate that the Rhumba maestro, who was set to celebrate his 63rd birthday on December 31st, died of coronavirus-related complications. The deceased arrived in Cameroon last week ahead of his New Year’s Eve concert in Douala where he was set to entertain his fans.

General Defao fled Kinshasa in 2001 upon falling out with former DR Congo president Desire Kabila and traveled to Zambia before settling in Kenya where he went quiet for years, only to resurface looking unrecognizable in pale skin.

“In Congo, bleaching is a symbol of status and every Congolese man worth his name who aspires to be admired has to bleach,” he was quoted as saying in 2016.

After 18 years of self-imposed exile in Nairobi, Defao returned to Kinshasa in 2019 following the election of President Felix Tshisekedi.

Defao had a successful music career with groups such as Choc Stars band in the 1980s and was known for hits such as ‘Sala Noki’, ‘Familie Kikuta’ and ‘Madova’.

His name is mentioned among other Lingala greats including Koffi Olomide, Werrason, JB Mpiana, Nyoka Longo and Papa Wemba.

“In Congo, bleaching is a symbol of status and every Congolese man worth his name who aspires to be admired has to bleach,” he was quoted as saying in 2016. Very sad indeed.I guess that is the closest they would come to looking like their former colonizers.
I wonder if he succumbed to liver,and kidney damage brought about by extended "poisoning" from the skinlighteners?
I have to giving him his props,though.The man was gifted with aperfect pitch voice,and used it well. Rest in Peace,General.

And what’s wrong with those bleaching themselves if they themselves don’t see anything wrong with it or better yet perceive some value in their lives for doing it? Let’s not be judgmental and subjective, life is too short and you can’t please everybody with what you do to your own body, its all about pleasing yourself and its none of anyone’s business!!! If you don’t like it, think wrongly if you want pease, but think for yourself!

@ Cos,please read my comments carefully,and show me where I said that their is something wrong with it? If you are one of those men who are using skinlighteners go ahead its not of my business.Iam not going to question the judgment of my creator.He made me black and Iam proud of my skin color.
And for your sake, does it really make any sense to take the risk of "coloring" your skin knowing that the chemicals could ruin your kidney or liver?Yes its your choice ,but use your brain wisely.Dont burden society with your poor decision,that you could have avoided. PLease take time to visit people who have liver problems and those on dialysis and ask them how they feel...

And who said society will be or is burdened by my personal choice when I can afford it? All I am saying is everyone is free to do anything with their own bodies!! FREEEEDOM!!! Freedom to even kill yourself if you so wish! Ever heard of the slogan My body my choice? Bleach it away whether it fries off your kidneys, heart liver whatever… its no ones business!!!!!! STOP being moral policemen too much subjectivity and judgments!!!

I dont know if you are just plain dump,or retarded.Your logic does not make sense in acivilized society.May be you live on another planet.
Let me tell you , in acilivized world, when your personal choice infringes upon societies "welfare" someone is bound to act. Yes its your choice to kill yourself, its your choice to put harmful substances in your body,but when that liver or kidney is gone,I hope you would not want someone to donate any organ,or take space in the hospital in the society,and treated,by doctors in the society.And above all, I hope your family say"its his/her choice" dont bother. This has nothing to do with being a moral police,but using your brain wisely.
I suggest you create your own world and live alone.

You are the most damn fool mothrfkr, just not getting it!! Shut up your filthy know nothing brains. Too old with a foul stinking mouth. Blame your dumb mama who sired a dumb knuckle head like you. This is the LAST response you get from me kihe!!! Go get circumcised fool!!

Hahahah feel better now?Interesting that you put alot of stock on that piece of skin on your two inch stump.Nature put is there why should i remove it.Go back to your cave.You dont fit in this modern world.

@ Cos, do you know skinlighteners are banned in Kenya? Do you know why? Why is the government bothering? Or you think its not of the governments business to act as a moral police? So what you are doing is pretty much unlawful. I guess you will say its your choice to or not to break the law.Sure it is Iam not taking that choice from you .All I can say is enjoy the consequences.

@ Guesty 1 you are missing the point. Its the logic behind what this fellow is employing.Meaning that if I see it good for me, I will do it .Damn everybody else...
And when I mean burden society its obvious .I dont have a problem if the fellow wants to kill him/her self in secrecy.But, Iam sure his family would want to help him or take him to hospital if he got some kidney or liver disease, thus burdening the medical system...

I'll be honest and admit I'm judging him harshly. I judge skin bleaching to be sign of self loathing and a severe inferiority complex. Why would anyone aspire to a pig's complexion? Many Africans proclaim to be god loving or fearing and ask for his blessings. Well that skin is a blessing that protects Africans from melanoma, sun burn etc. Doesn't changing it mean one thinks god was wrong (how can that even be?) and his gift is rubbish? It's what we do at this time of year - return or exchange gifts we don't like.

@ Mundumugo, I totally agree with you,but I was fully aware that some folks will invoke their rights to do so,that's why I did not go there. But I seem to get more attacks for my benign mention of skin coloring... Go figure.

@Cos you are so dumb. Your thinking is so shallow and wewe ni mjinga sana.

Your body, your choice... Bleach away.

Maxiley,
You missed it here! And what is SAD with someone bleaching themselves? Piercings, tatoos, ochre, braids, fashion, butt lift, boob augmentation, I guess anything one does to what they think is ‘improving’ their looks is SAD? Mhh. Misplaced!! SMH!

@ Mureithi, have you seen anybody coloring themselves blue green,red,or purple.Are these un attractive colors? Or are we waiting for mzungu to bethe harbinger ...

Hahahaha very good question @Maxiley. So many colours to go to. Why this???

and why not the color of their choice? Masai do red and so are the him a of namibia, are they now imitating the red indians and dont like their black skins?

@ Njeri whom have you seen imitating the Himba of Namibia or the Maasais of Kenya,and Tz? That would be nice wouldn't it? So of all the colors in the world only two,or three are attractive?

I dont believe that the congolese are doing it like the Himbas. They are lightening their skins to look more like whites. This fellow himself says that it a status symbol in congo.Do you know if it is same in Namibia?

A culture where men bleach themselves is egregious. These are lost souls and personally I could careless about their music. Fakers and an embarrassment to every living African.

Bleaching to look like the Belgian man behind chopping off hands millions of Congolese? That's a thinking from hell. I know West Africa love bleaching too. Watu kama hao wanafaa kutwangwa makofi.

Same as how whites tan so as to look darker.

There is nothing wrong with expired Defao or Jackson or Hundah Monroe bleaching.99.999…..of you guys are dressed in fabrics brought by colonialists instead of skins or Adam’s suit.The same number have fake first names and are followers of foreign/colonial religions.All of you know how to read and write also brought by Mzungu.Most of you(minus I phone 4G) cannot even write in their f(no)ather language.All of you are in a foreign land after our economy was ruined by makashia wazungu,trained thugs.Kila mutu afanye atakalo FULLSTOP

Self hate and desire to look like mzungu is why Congo found itself in a state of turmoil.
Instead of improving living conditions around you,you buy wigs,bleach skin & other self loathing activity!

Everyone has a choice, if you choose to do to your body whatever will make it easier to feel great about yourself during your time here on this earth do it... I see very hateful, subjective, better than thou comments. Why look down upon other's and insult people to force your point of view?

Live and let others live.. Kila mtu na starehe zake. No one is taking anything from you, labda look away if you don't like what you see?

Everyone has a choice, if you choose to do to your body whatever will make it easier to feel great about yourself during your time here on this earth do it... I see very hateful, subjective, better than thou comments. Why look down upon other's and insult people to force your point of view?

Live and let others live.. Kila mtu na starehe zake. No one is taking anything from you, labda look away if you don't like what you see?