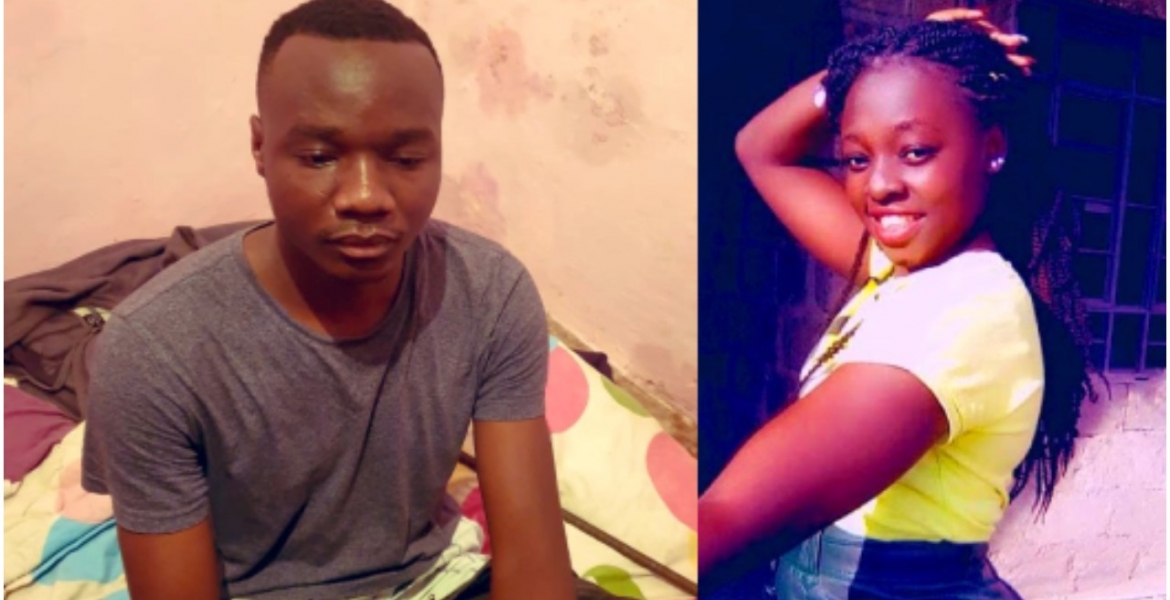 A 23-year-old Mount Kenya University student has been arrested in connection with the gruesome murder of his girlfriend.

Innocent Kalio Makokha is accused of killing Christine Ambani, a 23-year-old student at Kiriri Women’s University of Science & Technology. The lifeless body of Christine was discovered at a guest room in Githurai on July 13th, with deep stab wounds on the neck.

Investigations revealed that Christine, a third-year Business Administration student, left the institution in Mwihoko on the morning of July 13th to meet her boyfriend Makokha in Githurai.

The two booked themselves into a guest room in Githurai for a few hours as Christine was supposed to return to the campus to sit for an exam in the afternoon.

But Makokha returned to the reception and topped up the earlier paid amount to allow them to stay in the room for the entire night. On that night, the suspect allegedly brutally murdered Christine by stabbing her in the neck, leaving her bleeding to death.

He then took Christine’s phone and logged into her family WhatsApp group where he sent a message posing as her. He asked them to send Sh87,000 for her to refund her boyfriend money he allegedly spent to help her settle in the university.

Upon further look into the suspect’s criminal record, Directorate of Criminal Investigations (DCI) detectives discovered he had been arrested in February this year in connection with the murder of his brother, his brother’s wife, and their one-year-old baby.

Makokha is alleged to have set his brother’s house ablaze, killing him and his family. The incident was investigated by Mumias-based detectives and the file was forwarded to the Director of Public Prosecutions (DPP) for further action.

“The DPP advised that a public inquest into the matter be conducted. Even before the inquest was conducted and his kin buried, Makokha attacked the grieving family again by disrupting the burial planning meetings that were ongoing and destroyed the family’s property,” read a police report.

“He was arrested, charged, and remanded at Kakamega G.K Prison. However, the case was withdrawn under unclear circumstances and the suspect set free.”

Makokha was smoked out of his rented house in Chokaa area within Nairobi’s Kayole estate at 2:00 am on Tuesday. He will be arraigned in court to face murder charges.

The DCI has failed here...miserably. This cold blood murderer could have been stopped long after killing his brother's family. I am sure there were other red flags even before killing his family. Sad! And my dear university girls, what's itching you? Pls upgrade your expectations. This lovely girl did not have to die...this way. Poor parents, poleni!

Noordin is to blame as Kinoti had arrested and charged Kamanda/Raila/muuaji Makokha.But even without Noordin’s intervention,he would still have killed her as the court would have released him on bond.REVENGE by Ambani’s father & brothers immediately after his release on bond is the only justice/punishment left as like Raila,Kamanda Makokha is still BLOOD-THIRSTY.

The DCI has failed here...miserably. This cold blood murderer could have been stopped long after killing his brother's family. I am sure there were other red flags even before killing his family. Sad! And my dear university girls, what's itching you? Pls upgrade your expectations. This lovely girl did not have to die...this way. Poor parents, poleni!

So this Bad bastards "had been arrested in February this year in connection with the murder of his brother, his brother’s wife, and their one-year-old baby" and he was Roaming the Streets again? Yes! Huenda hata Watu wake waliHONGA na kumTOA kizuizini.UmLEAvyo mototo ndivyo aKUAvyo. Mluhya ni mLUHYA. Mtoto wa maNyoka ni NYOKA.

@ Guest 1, are you still a devout christian or you are just in name only? Yes, Iknow its still tough on you after Weingo broke your heart many years ago. Just forgive and forget. Your God will do the punishing,right?That is if he has not this debaucherous luhya. Iam sure your good book tell you to forgive.May be you should try my religion.My comrades dont insult,they find solutions to insults.

Here comes another LUHYA bastard and Atheist. What has a satanist you're to do with GUEST1's religion? And how can a blind Idioti(sic) you're lead a seer that GUEST1 is? You're useless as hell just as you're to the regretful mother that gave birth to you.

Are you happy now that you have vented your frustration at what I wrote,Mr,or Miss high IQ?
If you have any sense as you high IQ suggests,you would know that the bible your people read does not condone the language you have used here.I guess you are another christian in name only.Follow what Jesus preached if you are too lazy to read your bible.

MuKenya should explain whether Makokha,a “US” Kamanda/Wanjiru/Raila/murderer bribed Kenyan prosecutors to escape justice twice-first killing his brother,in-law,nephew and second-destruction of property.Halisi should also explain how and when all these “US makamburu” Railas and police relocated to Kenya or whether all those daily murders are being committed in US and bodies dumped at various places back home.

This matter belongs to the immediate family, friends and the department of government involved. Not a public affair. Stop keeping Kenyans in a mobid state.
We need to put out of business our enemies who are in death business. We have 40 million Kenyans. Are we to advertise every death? Is every death a public affair?

There has to be a passage in revelation that alludes to every death being reported as a sign of the end times. Point me to it please.

So in your mind it is ok for the guy to kill the woman? The info was put out to caution others that may fall in the same trap! It is a way of educating others! I think something is mentally wrong with you if you can’t understand that simple fact!