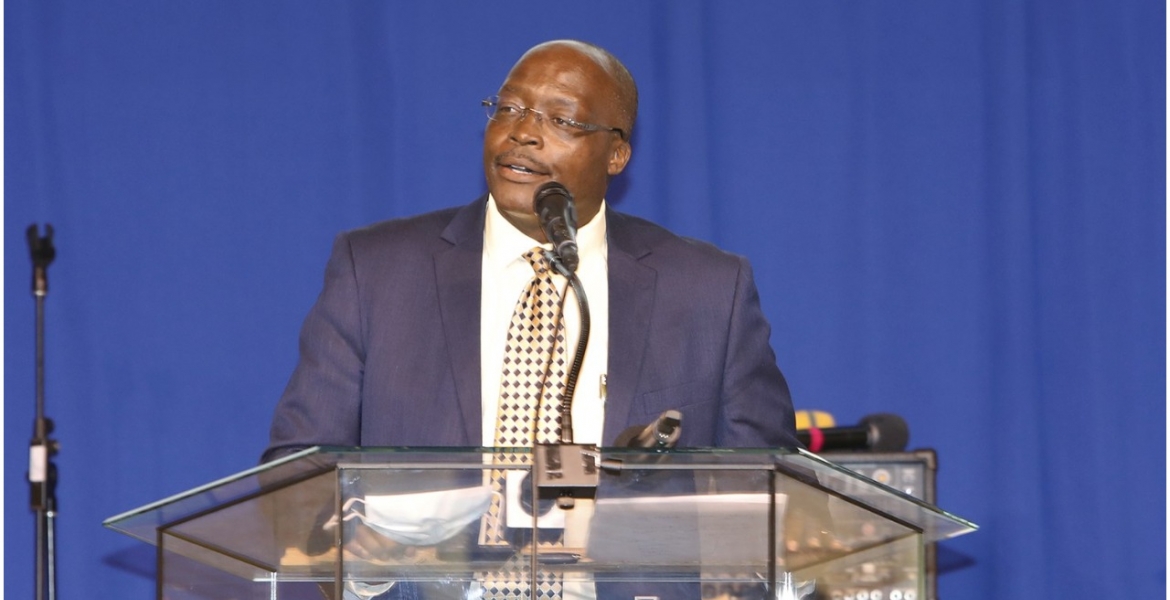 Ongeri, who has been living and practicing in Minnesota, kicked off his campaign at an event held at Ebenezer Community Church in Brooklyn Park, MN.

He is seeking to succeed Governor Amos Nyaribo, who took over the seat in December 2020 following the death of Governor John Nyagarama. Nyangarama, who was serving his second and final term, died of COVID-19 related complications.

“I am not seeking to be governor so I can be called governor,” Ongeri told Mshale in an interview.

Speaking during the launch, Ongeri briefly outlined his plan for Nyamira County, promising to end what he termed as poor leadership.

“The opportunities that are in Nyamira are undercut by two things, poor leadership and you wanna know the second one? poor leadership. How does a building in June 2021 fall on people in Nyamira county after we have sunk over 300 million into it, how do people not get angry? Our movement is a rejection of that and we are going to go to every length to say it, denounce it, condemn it, and yes eradicate it, when I am Nyamira governor that is going to be history,” he said.

“My goal as governor is to fully integrate the diaspora into the development of Nyamira and that is nothing new just like how the Jews, the Filipinos treat their diaspora as one of their greatest assets.”

Ongeri said he will fully embrace the diaspora by establishing an office for diaspora affairs in his county cabinet even as he dismissed claims that he does not understand the plight of Nyamira residents.

“I know the issues very well as every week I have to pay for the diabetes medicine my sister needs after they (authorities) have stolen the money that should be paying for it,” said Ongeri.

So building collapses and your sister's diabetes those two are the reasons why you are running for governor?? Utter Bullshit. Where have you lived continuously for the past ten years. If it was in Minnesota, then bro cool your heals and seat your ass down. Clueless people like you living in the diaspora and having daydreams about being an automatic governor is getting out of hand. What else have you to offer people of Nyamira. As an attorney have you ever set up probono services for the poor in Nyamira? Did you know that Nyamira county has NO LIBRARY? What is the plight of the youth in Nyamira? What have you done in terms of policy to push the youth agenda? People like you only want to launch some Godforsaken campaigns and run back to the city until the next election, for fear of living next to "witches" in your county. It is absurd. Nyamirans reading this I urge you, if you see these WANNABES ready to spend money, KULA PESA KABISAAAA!!! I REPEAT KULENI PESA ZAKE KABISA, MILK THEM DRY, AND GIVE YOUR VOTE TO WELL DESERVING NYAMIRA CITIZENS WHO TRULY UNDERSTAND THE PLIGHT OF NYAMIRA AND WHO HAVE A TRACK RECORD OF SOLVING PROBLEMS AND POSITIVELY CHANGING POLICY THAT WILL BENEFIT THE COUNTY.

Therein lies the problem. It's all about eating, not about what you as a citizen can do to help yourself, your family, your community and ultimately your country. The government is only as good as it's citizens. Eaters elect eaters and corruption never ends. I don't know Nyamira, I don't know this lawyer and I don't know Nyamira politics but I know your circumstances will remain the same if your representatives never change.

Attorney Henry Ongeri, I applaud your courage in taking up the gauntlet to vie for the Nyamira governorship seat. You have what it will take to win the election (regrettably against another friend of mine) and run a modern county. A word of caution for you at this stage is a reminder of Charles Njonjo's time-worn adage that "politics is a dirty game". Learn to play in the field with hyenas and sharks but keep focus on the ball. Remember that from now hence, your words will matter and will define you. But, most importantly, every opportunity you get to make a statement, should be a moment for a crisp and strident message that will resonate from Rigoma to Nyabioto, from Ekerenyo to Omogonchoro. That message is that the tea farmer and the boda boda rider can both look up to you and,you are there for the long haul representing a leadership paradigm shift, a breadth of fresh modern air, a promise of positive change. We will be watching and cheering...

How can a demon like Kirubi expire?I thought he was stealing to prolong his live.I would have liked this elite thug to wait for REVOLUTION/FIRING SQUAD but whoever inherits him including his TWO MALE WIVES won’t be lucky.Chochote HIZI NGITI wako nacho ni cha wanaKenya.

Congratulations my friend Henry.
Happy to serve in your cabinet in charge of diaspora portfolio for FREE.

It is agood start.But the best results would only come when Diaspora has avoice with power.And that is putting some representative in the parliament.Otherwise,all these issue diaspora have will just fizzle in front office and go nowhere.Same as what is happening today.

You guys are jokers. Yani mnaishi kwa wenyewe and you want representation? Why not just pack those bags and find your way to JKIA?

You are looking for the opportunity to steal like the rest of them @2cents!