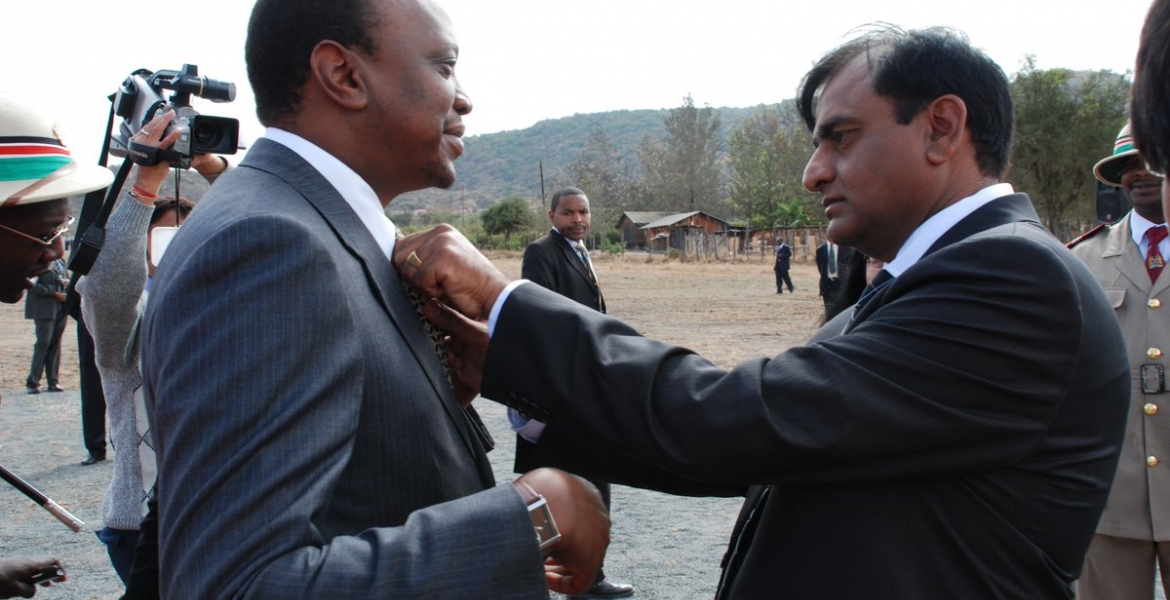 Kenyan steel billionaire Narendra Naval says he will be donating his entire salary from his University Chancellor job.

Naval was recently appointed as the new Egerton University Chancellor by President Kenyatta.

In a social media post, the industrialist has revealed he will serve at the Nakuru-based institution for free.

Raval says his entire salary, allowances, and other financial benefits will go towards supporting needy students at the university.

The 55-year-old takes over the prestigious position from Prof. Shem Wandiga, whose tenure expired in March this year.

He also says that should any of his companies do business or supply goods to the university, it will be for free.

Raval made it to the Forbes list of Africa’s richest individuals in 2015 with a fortune of Sh41.2 billion.

Last year, he pledged to give away half of his net-worth to education, health, and social programs to benefit the less privileged.

Thanks Narendra for setting a positive precedent, hopefully the prominent grabbers can one day work for free or help others because this war on corruption has largely been a "catch and release" game.

He does NOT a Job.

He does NOT need a Government Job.

There are still good human beings on the planet earth.

Great job Mr. Narendra and we thank you for your philanthropic works. Hopefully other equally or more privileged like you will emulate you and help the underprivileged too.
We salute you Sir and GOD BLESS.

I know my comment, is not necessarily related to this article, but I'm posting it here nonetheless.
I'm so proud to be a Kenyan in diaspora, but my country and my countrymen in Kenya don't seem to be proud of me and my fellow brothers and sisters living abroad. It is such a shame, especially because most of the time I meet my fellow Kenyans in diaspora, they seem to have passion for Kenya and in fact most of us have been wearing our Kenyan flag hand-bands for as long as I can remember and we wear the hand-band with pride. But most importantly our passion and love for our country is shown by the billions of shillings we send home every quarter.
The reason why I'm saying this is because we don't seem to have support not only from our government and their embassies, but also from our fellow citizens in Kenya. They don't want us to vote, whenever we go to our embassies they treat us like second-hand citizens, whenever something tragic happens to our fellow Kenyans in diaspora they treat that news not with sympathy, but rather with jest and ridicule, Kenyans and some journalists in the Kenyan media houses always make fun of what we do, except when they announce the billions we send home or when they come hear to lure us to buy apartment homes in Kenya. Furthermore, just recently there was news that parliament enacted a law that imposes a fine of 5 million shillings on a Kenyan who forgets to report a dual citizenship, just to name a few. Therefore all indicators show that we in the diaspora are on our own!
This is actually a shame because Kenya progresses when we work together as a team, when we treat everyone with respect and empathetic with one another and when we put systems in place to support citizens living abroad. Further more the government could make much progress if it were to exploit the intellectuals living abroad with vast ideas that could help move the country forward. At the moment, the country is stuck in quagmire of corruption and ineptitude at different levels in the public sector and only progress being made are those in computer models showing some imaginary visions that we are nowadays used to. The public corporations such as like Kenya Meat, Cotton, Pyrethrum, Sugar, Paper etc are all dead and the country is borrowing with disregard only to be looted upon reaching the Central Bank. It is high time Kenya government give Kenyans in diaspora a chance to contribute in moving the country forward. Otherwise every ambitious dream they draw on computers will remain just there, in computers. It is also high time our brothers and sisters in Kenya treat us with respect. Regardless of what they think of our jobs, the fact remains that we earn every cent we make legitimately and hold our heads high without shame of corruption.

I would not have put it any other way @Jag

You are spot on. Diaspora are largely treated like trophy game they are hounded and "hunted for sports" despite the huge remittance. Always on the receiving end of every Tom, Dick and Harry's evil plans (for the money) or ridicule and shaming otherwise.

Jag , you are right very right , I can't add because it's true and long live those abroad, hope when time comes we will make the dreams flourish soon we have to by 2022 , mail me will talk joshuakipkemoiboitt(at)gmail(dot)com , I am a supporter of Julius malema pan africanist abroad in Asia

My experienced Opinion: Wait until those "Nice" yet NASTY Kenyan diasporans Use you, Refuse to refund your money, Defile your marriage or Envy your Success towanti g you Dead: That's when you will Regret and Retract your comment. Look! About 99% of Kenyans abroad are Devils; very Diabolic; Haters of sorts.

God bless you! And others are taking it away from poor Wanjiku

In the photo above we have one person that makes his money through his business acumen and even teaches entrepreneurship at the local university. The other makes his money by thieving from public coffers.

Baba wetu Uhuru should also start working for free and help some sectors picking up from the effects of looting and squander and poverty. He is already a billionaire. Isn't he?

Are you qualified for the job or was it given to you so that you can flaunt your riches and promote your business interests in Nakuru.Am sure a more deserving Kenyan of african origin could not only do a better job but be more appreciative not to forget uplift his family wellbeing there are too many qualified graduates in Kenya tarmacking. And I digress umeandika na kudefend academic paper ngapi.Sometimes money is not everything an institution of higher learning needs too be led by the same not a tycoon coming from the school of hard knocks