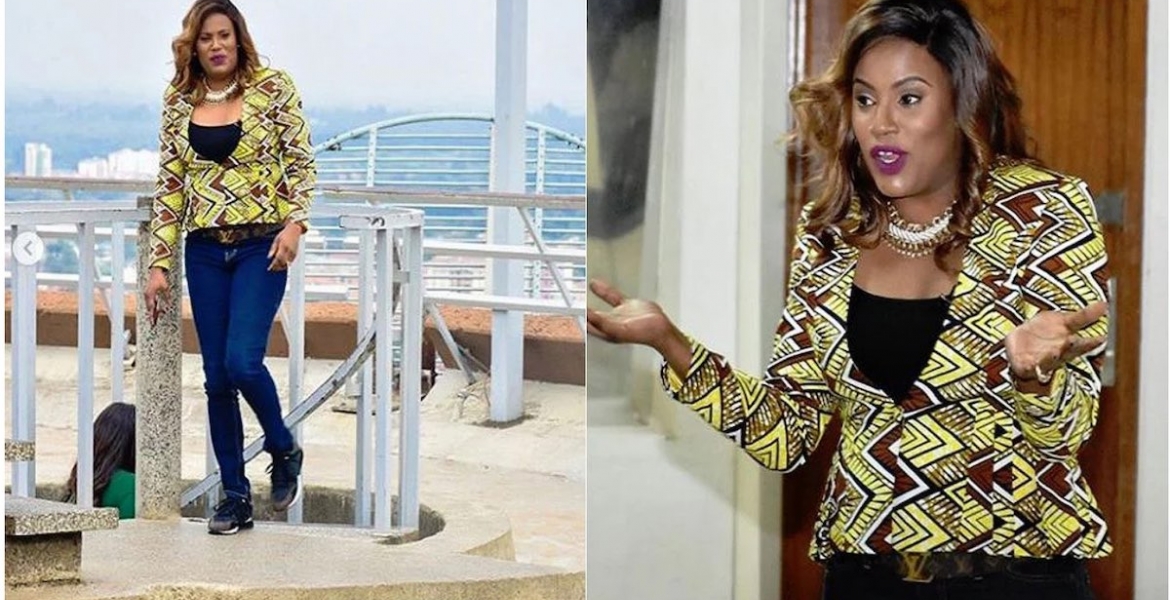 Members of the Parliamentary Committee on Tourism, Sports and Culture were on Monday forced to cancel a meeting with Kenyatta International Convention Centre (KICC) CEO Nana Gecaga over her dressing code.

The MPs accuse Ms. Gecaga, who is President Kenyatta's niece, of dressing inappropriately to the meeting.

Mwingi West MP Charles Nguna accuses Gecaga of disrespecting the committee after she turned up wearing a pair of jeans trousers and a t-shirt.

Nguna says Ms. Gecaga did not prepare for their visit to the conference facility despite having been notified by the Clerk of the National Assembly two weeks earlier.

He says no one was there to welcome the committee during their visit to the facility and were also forced to wait for Gecaga for more than half an hour.

“The members struggled to find their way into the building and to the CEO’s boardroom only to find her missing. They waited for about 30 minutes before she surfaced casually dressed in jeans trousers and a T-shirt on a weekday and seemed unbothered by the MPs’ presence,” says Nguna.

Machakos Town MP Victor Munyaka, who chairs the committee, slammed Gecaga for the low-key reception they received and adjourned the meeting over her unpreparedness.

Thats what happens when you practice nepotism; you get incompetence.
Add history of alcoholism and her constant cries for a man in her life and you wonder which one of the two has happened lately leading to her unpreparedness.

You nailed it Mugikuyu. And that's how the Casual leadership of UhuRuto and other Auto-Mangamangaras (including those Pathetic pastors) have been "leading" the Country to hell (and Tax and Tithe payers' Expense).

I guess she was dressed business casual..mtajua hamjui..it is called Kenyatta ICC..

Kenyatta ICC design was inspired by a Donkey Penis.

If you worked in a building inspired by a Donkey’s Penis you would not care about dressing.

Did I hear someone say "tusker tu!" or is it "johny walker tu"

That is what I was about to write 'Tusker tuu baada ya kazi' She might have had a bad hangover in the morning. Like uncle like niece.

You elect a Mlevi for President, he appoints Walevis for Pathology.

Who goes to a meeting wearing jeans and t- shirts? Money does not buy class ...

Ha, ha, ha! Kenya kuna mambo! Lost for words, but the sis has to be seen trying guys..give her a break!

mwakilishi should return the vanished story and stop being biased or just rudisha comments za wenyewe.

@Formerlyguest2, Hahaha, I thought I was hallucinating but nope. I was looking forward to reading the very nice, friendly comments especially one from @mkenyaHalisi.

Same here, but I thought when people are out of the closet any comment is fair game just like any other posts that appear here , kumbe there are exemptions to the rule. I found the same post somewhere else in the big world wide web:-)

The MPs are demanding high level treatment, but they themselves provide pathetic treatment to their fellow citizens. In as much as people are calling out the CEO for tardiness, and casualness, the MPs should portray humility and not expect glorious treatment. The era of "Mheshimiwa" is long gone. Treat your people well and people will come for your defense when someone treats you badly. But when you hold traffic, for example, for hours just because an MP or a minister is passing, how do you then complain when you get worse treatment! Humility pays BIG!

This is super stupidity, so what have the suit wearing mpigs done for Kenya, to me she seems decently dressed putting aside the nepotism aspect of it all. You can dress all you want but if you are not competent it means nothing but just a nicely dressed lady. I would be more concerned on how qualified she is, well dressed or even well spoken does not equal best qualified, just ask the hoodie wearing engineers at goodle and microsoft...get over this mentality of appearances

Still don't see a reason for canceling a meeting. Hope they won't claim the allowance. I'm sure it wasn't that important anyway.

Could be her dress code was to show the disdain she has for Mpigs...May be the agenda of the meeting was not that serious.Were it,then it should have still taken place,after reprimanding her for her tardiness,and dress code.
I have been to a job interview in a bank where the interviewer was very casual in atire,and that was probably to make me at ease...
Anyway,I hope Mpigs'committee did not include some of those implicated in the fake money scandal ,otherwise they have no"locus standi".
As for the lady, lets hear your side of the story.My guess is that she has had afew meetings of high level in the past,and how did she dress up.My 2 cents worth.

Case of pot calling the kettle black. These Mps may have suits on the outside but in the inside their actions and language are uncivil and unkempt. This is arrogance and hypocrisy combined-who dictates a dress code for a meeting? Next time send a meeting invitation and dress code. The Mps not should have played into this lady's hands they should have gone ahead with meeting. If mps showed some emotional intelligence, the lady in her drab would have appeared the "juvenile" one.

I don't know what the protocol is but I also bet our MPs would dismiss Steve Jobs in his jeans and turtle neck shirt if they had to meet him. I am also surprised that the MPs were disturbed that Nana was not wowed by their awesome presence. My point is matter at hand over dress code anytime.

Such stupidity!!!!!! WTF does how she is dressed have to do with anything? If she can do her job let it go. This Kenyan MPIGS biz of wearing cheap suits in 90 degree weather is nonsense! Dress for comfort.

MPS shd worry about their dress code in Parliament. You don't come to my house and dictate what I wear. If they were expecting a red carpet and traditional dancers to receive them watajua hawajui.

Can our Mpigs demand decency? What is decent in exploiting the very people who voted you to parliament? You were voted for to serve wananchi and not to milk them dry as the past has shown. It’s a pity you don’t care for the hungry ones now but take away even the little that they have. You should be busy helping the Mandela and Baringo folk instead of going to KICC to assess Nana’s dress code.

IS THIS THE SAME NANA WHO WANTED SOMEBODY FOR A SERIOUS RELATIONSHIP,----NOW I UNDERSTAND WHY----PARLIAMENT HAS MPS WHO HAVE NEVER SPOKEN EVEN ONE WORD IN KISWAHILI OR COME WITH A TRANSLATOR----- THAT IS HER OFFICE---AND REMEMBER THE BOSS IS ALWAYS RIGHT.

FG2 & Maxiley...look at this, a treat for you to see what you are missing in Kenya (or not)!! Kenya has mutated and I for one don't envy the millenniums in Kenya. Ati - "How'd you doing?" she asks...I thought I was watching some American reality. Ha. ha, ha! https://www.youtube.com/watch?v=RDQWrYTNcF4

@Sukari...Wow cannt believe it's in Kenya.Iwill treat the video as entertainment ,to that end,the show was an affront to my manliness.Its digisting to me when aman acts sissy.But to each is own if he was born that way.Wow...really mutation alright.Iam gland my ancestors are not there to see these or they would croll back their graves.

Maxley, be careful next time your are jiggin with it at Carnivore 80s soul night with that mrembo umepata huko, you never know who she was her before life. Heh now dating in Kenya is going to be tricky, one has to ask the fundamentals aka were you born a girl or a boy?lol ......

@Sukari, I swear I have cracked up here in a coffee shop
shamelessly , oeiii!!!This is where my cucu would say " ngai baba kai twarumire uu " translation " Oh Dear God, who did we insult to get to see this". Okay missy thang doing her thing! Jesus the rate in which we are adopting foreign ideologies is out of this world. Our culture has literally been neutralized in 10 years and some people here will scream murder ati human rights. Next we will have the neutral gender going to court for their rights. That reminds me I had a gig where we were to address someone as "they or them" and me Kenyanese in me kept forgetting every time coz I'm not used to such kind of nouns when describing a human being. Oh well , next... . Mwakilishi missed to post this one . @Maxley, I know you advocate for human rights and existence but with this rate, marrying a pet is not that far fetched anymore in our dear Kenya.

I am relocating to Costa Rica as my second home.My relatives can come there if they want to see me.Yes the abuse of human beings,but have vehemently attached those who warship wazungu.Now this!.Thanks for fore warning me.No dating in Kenya as of today. Probably Iwill bring my own date...you.

Heh now that your retirement dreams seems to align with mine aka Costa Rica - Caribbean life , I have now agreed for a date :-)

Thanks.ilook forward to that with great anticipation.

It's called Kenya yetu! So next we are there, I will be careful and giving a long side look to any man/woman approaching me. Heck, it's all too much. FG2, I thought she was a sister to that Nene Leakes of housewives saga in America.

No this one belongs to the other show " Rupaul something ......

Uhunye was complaining last week about Jomo Gecagas conduct in Namibia. Apparently he's lazy and not taking his job seriously. Granted Uhuru is so good at pointing out mistakes by his own relas, but when he hands them those positions while so many, qualified, efficient, effective, Highly educated, disciplined Kenyans have to be kept on the sidelines for these MF bunch of jokers, Uhuru awache kutuletea ufala. In any case kuna marelas hawasaidiki. Hata uwasaidie kiasi gani, hata uwafix namna gani, hata uwasukume namna gani. Ndio hawa Gecagas, they can go to hell!!!