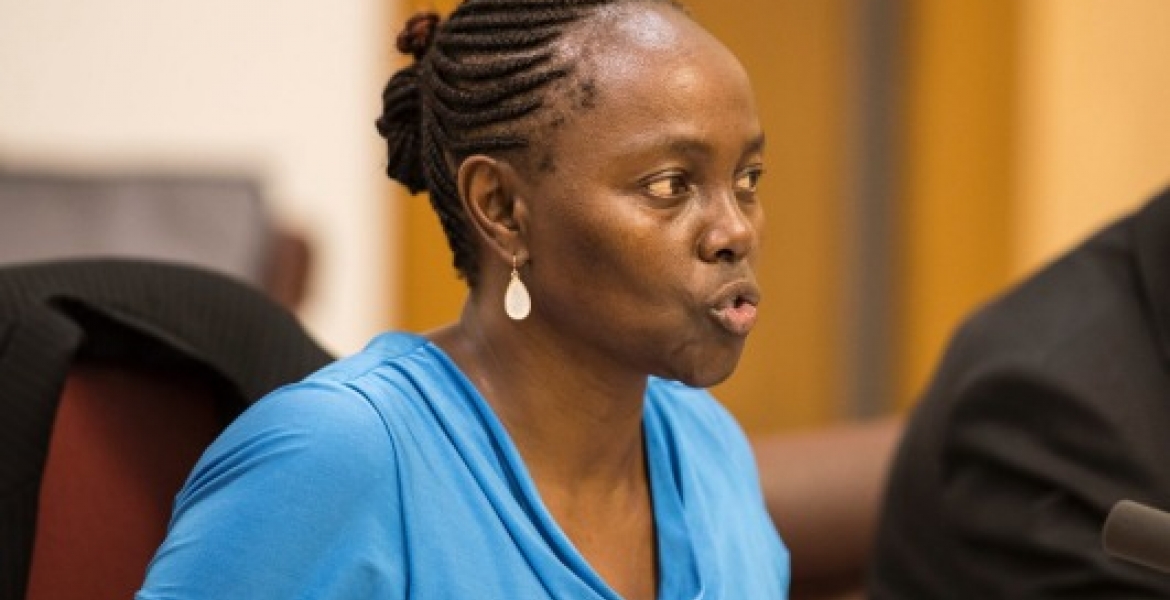 Kenyan-born Australian Senator Lucy Gichuhi has for the first time opened up about her marriage life.

Lucy, who made history after she became the first person of African descent to be elected to the Australian Senate, says she is a victim of domestic violence.

Ms. Gichuhi has made the revelations in her first book titled ‘Behind the Smile: From the Slopes of Mount Kenya to the Commonwealth Parliament of Australia'.

The Australian quotes the Senator saying that she suffered physical and emotional abuse from her husband of more than 30 years, William Gichuhi.

She reveals that she once busted his husband, whom she's still married to, sleeping with one of her seven sisters, who he was having a love affair with.

“I momentarily thought of smashing his head with a drink bottle but then I remembered that I am an Australian now and domestic violence law would catch up with me,” Gichuhi says.

After moving to Adelaide in 1999, Gichuhi says her husband eavesdropped on one of her phone calls expressing frustration on his refusal to support the family.

“All hell broke loose, William did not say a single thing to me that whole week. He was furious...I asked him about a bill that needed to be paid. Suddenly, he charged at me like a raging bull and slapped me so hard across the face. He then hit the wardrobe with his hand and broke the mirror but hurt his hand, which started bleeding,” she narrates.

“I was terrified, confused and shattered all at the same time. It brought back memories of being in Kenya when William had hit me hard and slapped me around the face after an argument,” she adds.

She says she chose to share her story in order to inspire and give hope to girls that they can still be whatever they want no matter the challenges they encounter. She notes that her Christian faith and career have been positive outlets outside of an often troublesome home environment.

“This is about a girl becoming all she can be irrespective of circumstances, gender, color, culture, and creed,” she says.

Why now?? You still hold the grudges, or you forgave him like a christian?

Forgiveness does NOT grow from trees Just like that; and neither is it there for Squander or Abuse.

@mteja: Unaposema, " ... you forgave him like a christian" maana yake ni nini?

Now some Christians willsay,this marriage was made in heaven.Really?.Christian faith a side,when somebody lays a painful hand on you,let it be the first and last time.That is if you love yourself,and if God is concerned about your welfare,he would not let you marry a monster.Which leads me to say that you just made a choice if a bad partner.And you are not the first one.Use your brains to make better decisions and also look learn from yours and other people's miskates.As I always say,marriage is not for everybody.

Will you accept it as agift from me "triangulated" through Formerly guest2?

Incest...."She reveals that she once busted his husband, whom she's still married to, sleeping with one of her seven sisters, who he was having a love affair with". Mnakulia sahani moja na dadako.

@ Kenya, to many, that act would be a marriage breaker.Even for many christians.She says that she is still marriage to him.But are things back to where they were before he was busted.of course, I am assuming that things were not that bad before the busting act,but again they may have been so bad that they lead the hubby to canoodling with sis. in law.
Again as I have said many times, people marry for various reasons.While some may enjoy the canoodling that a "permanent" partner brings,some abstain for various reasons,and hang in for the other benefits like financial support.Hard to believe,but yes there are some sexless marriages around.

@maxiley, I do not know whether this is something she made up to sell her book but it makes her family looks so creepy.

Maxiley….not even with that! These rich people really think they can hood wink us into making them more richer! The heifer sat down and calculated how well she has done, then thinks...mhhh..I bet those sisters out there wonder how all this came to be? Like all good compositions we were taught to write, a tale has to have a twist/cliff hanger, reader grabber in it to draw us in. So, she concorts something about an abuser she is still married to? C'mon now, I know for sure if I choose to stay with someone because I forgive them and he is the father to my kids...then you lot will certainly not hear of it! Old school me thinks family comes first and if I have beef with them then it is OUR business, not for sale. I will not spend a coin enriching the rich. Not a miser but I don't buy into this sort of con....any books, be it Michelle Obama, Oprah, etc....wote have made it, we have seen it, but do they need my coin to make their big behinds any bigger. Heck no!

Very well said my Sister, I too, do not subscribe to kiss and tell books to enrich one self - gullible masses go on to read other people stories to get motivation - well I do not need Oprah or Mitchell or in this case some Kenya - Australian woman who the other day was misusing public funds to motivate me every day I wake up.You are not old school, any decent person should never lay their dirty laundry in public especially if you have children ! When you are alone with no one else to affect with such , then , well but kama uko na mtoto ama watoto, that is the disservice you can do to them and you are unfit as a parent.

@Maxiley - I will "tringulate" the book to Sukari he hehe for free .

hehehehe there goes diaspora black brainwashed bongolalas.Umekaa kwa wenyewe til umekuwa kama wazungu?Why write such bullcrap about yr husband yet he is feeding n leaving with you?Coz u wrote nicely about yr husband negatives can u pliz tell us too what you had done to yr husband when he was busy sleeping with yr sis.Mayb as a wife u had denied yr husband conjugal rights??This nonsense of pple coming out after 10/20/30 years accusing or writing nonsense about others is nonsense??Mrs senator i know adelaide elections r not far n mayb u want votes but trust me the majority of both Africans who r voters in adelaide ain't voting for you after reading this!

The narratives here depicts signs and symptoms of schizophrenia. This Woman is ever in a fighting mood and full of anger of unknown. May be her cheating hubby infected her with tertiary syphilis which can cause a mood disorders.