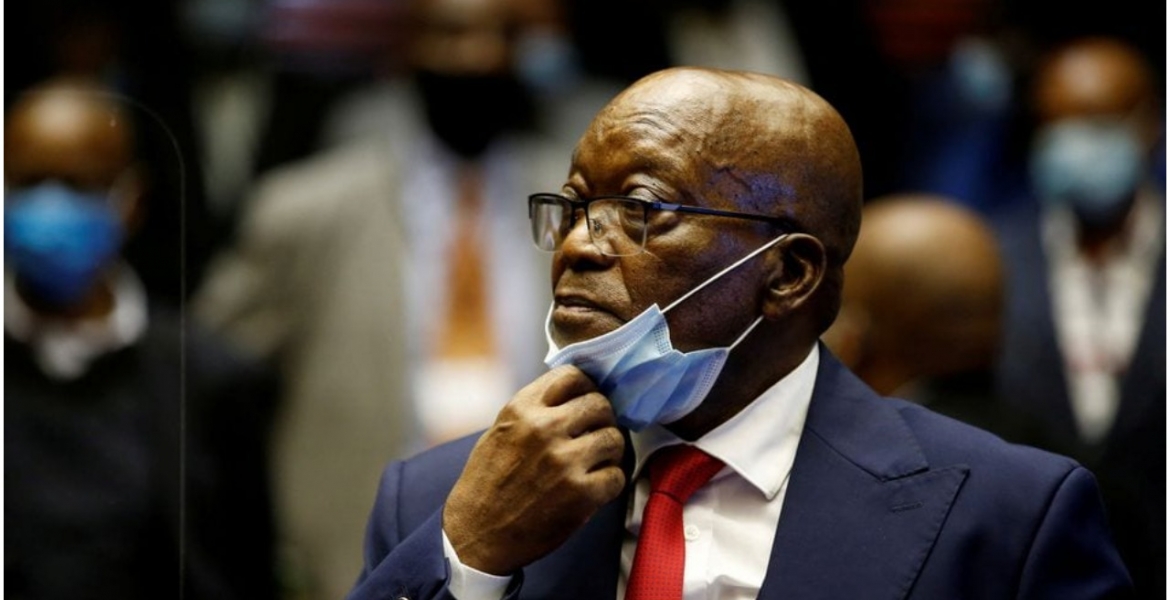 Zuma was handed the sentence by the Constitutional Court last week after he was found guilty of contempt after disobeying the court’s order requiring him to appear at an inquiry into corruption while he was still in office.

The 79-year-old’s period in power between 2009 and 2018 was dogged by graft allegations where prominent businessmen were accused of conspiring with political leaders to influence the decision-making process.

Zuma, who resigned in February 2018, made one appearance at the inquiry in 2019 but skipped subsequent proceedings.

This prompted the inquiry, which is headed by Justice Raymond Zondo, to seek the intervention of the country’s highest court.

“The constitutional court can do nothing but conclude that Mr. Zuma is guilty of the crime of contempt of court. This kind of recalcitrance and defiance is unlawful and will be punished. I am left with no option but to commit Mr. Zuma to imprisonment, with the hope that doing so sends an unequivocal message, the rule of law and the administration of justice prevails,” Judge Sisi Khampepe ruled on Tuesday last week.

“The majority judgment orders an unsuspended sentence of imprisonment for a period [of 15 months].”

In a statement, police spokesperson Lirandzu Themba confirmed that Zuma was in police custody in compliance with the Constitutional Court judgment.

The Department of Correctional Services said Zuma was admitted to Estcourt Correctional Centre. The court had instructed police to arrest Zuma by the end of Wednesday if he failed to appear at a police station.

Hundreds of his supporters, some of them armed with firearms, spears, and shields, had camped outside his homestead to prevent his arrest but Zuma voluntarily turned himself in.

“President Zuma has decided to comply with the incarceration order,” his foundation said.

South Africa is to the People; and Kenya to the Dogs; Dumb dogs; Dogs that Bark but can't Run, Catch, and Bite. This is Why people like Jomo, Daniel, Nicholas, and Ruben ran and died Scortfree. And William will go the same way of Run and Die if Kenya doesn't do South Africa's way.

Wow...the wind of change is finally blowing, these are the first steps.
But even ROME WAS NOT BUILT IN A DAY.

Zuma is going to bring down the whole house of Babel. Billionaire Cyril watch ya behind.
Zuma is not one of the smartest wily ppl in town. I feel for his naivety. Zulu king like playboy

Uhuru is a Thief too. He stole the 2013 and 2017 presidential Elections. Remember?

Wow congratulations to South Africa.His supporters with their crude weapons of bow and arrows could not shield him from the strong arm of the law.If only the judiciary in Kenya worked the same way most of this so called presidential aspirants ,MCA’s governors and their stooges could be locked up a long time ago.Only god will save Kenya

Expired Haiti’s president,Moise is now food for the maggots,crickets,Beetles,vultures and other Railas.Zuma to C-Max or Ebogweni apartments while Uhuru is still presiding over looting of shs 2b. per day.I would appeal to PC Eagle/Kipschit,a.k.a,Kagaga to stop killing innocent men.She should also not surrender to DCI.Eagle should travel straight to HAITI for further training.as her shooting skills are in great demand to save Kenya from hyenas and pigs.

Matiang'i, Uhuru, Mucheru and all those who ignored court order new dawn is coming. One day you will find yourself locked up.

Sometime last month former CJ accused Uhuru of disobeying court order twice. I believe the court had ordered him as per constitution to appoint judges...Uhuru refused with no consequences to follow.
Well folks,this government is made of people we elected.Whether elections were stolen,rigged is another story for another day ,and to me at this time that issue is ad nauseam.
2022 is around the corner.Well let's not make business as usual this time,that is electing thieves,and highly paid do nothing Mpigs. This is our chance to kick them out.
Once campaign is in full swing,we shall hear the same drum beats,and same spraying of cash to influence elections. Please dont sell your Vote.Make it count by voting out these unproductive money minded deadwoods
Take amoment and reflect on Kenya politics. Do you see acommon thread weaving through our politicians?Iam sure you do.They are the same politicians or their families elected for the past 30 years.So what change do you expect if you elect them,that they have not changed in the last 30 or so years? You need change for the better, then VOTE for better candidates.Candidates who will abide by the constitution,and the rule of law.Otherwise we are just spinning wheels. My two cents.

I applaud Zuma. A REAL MAN OWNS UP TO HIS MISTAKES. He still had influence. He could've gone down in bloodshed, like "men" worldwide resort to when shit hits the fan but Zuma, he's wise.