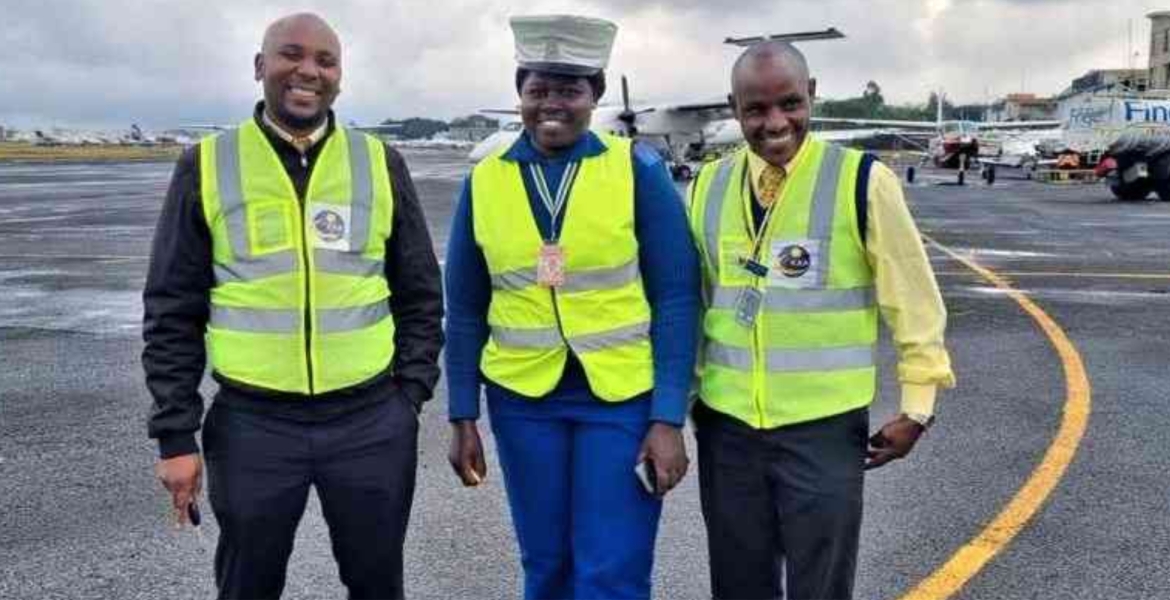 Two Kenya Airports Authority (KAA) employees and a police officer stationed at Wilson Airport have earned praise after returning a bag containing over Sh2.4 million, phones and an iPad to UK tourists.

The tourists had left their bag at the airport's arrival section a few weeks ago when Joseph Kabangi, Martin Kamau, and Brajeliner Fikiri found it and kept it at their office before calling the owners to collect it.

Kabangi is a security supervisor at the baggage collection area at Wilson Airport, Kamau is a security staff while Fikiri is a policewoman who controls motorists arriving to pick up travelers.

“I can remember it was early last month there was a passenger who came and they were transferring their bags from their trolley to the tourist van and one of the passengers somehow forgot his bag…it was a small brown bag,” said Kabangi.

Kabangi said Kamau and Fikiri helped him to screen the bag to ensure there were no explosives or any prohibited items. On further search, they discovered the bag contained cash in dollars and Kenya shillings, phones, an iPad and cards.

“We had got his contacts and we called him and he found us in the office, he identified the bag and said the bag was his. If he had not turned up that day we would have booked it in the OB and then we keep it in our safe custody,” Kabangi added.

The bag belonged to Benson Nickolson, a British citizen who was on a three-week vacation in Kenya and Tanzania in the company of his family. Besides cash, the bag also had some valuable regalia given to him by his late grandmother.

"I developed temporal insanity as it appeared we had no hopes of recovering the bags.” "I was in charge of all the resources and finances, so I had a substantial amount of cash and plastic money in form of cards that facilitated our movements and comforts," Benson said on social media.

"Without any CCTV, I could not comprehend how my bag with such valuable items could still be found and that the owner was called to collect it. My brother lost a tenth of that [amount] in South Africa where they have a robust CCTV system. Therefore, it is not about systems, it is the human factor, the people, the staff who are the greatest asset. In my country, this is not possible to recover. Only in Kenya, I can assure you.”

“Our next holiday was scheduled to another country but we have since reviewed to come back to Kenya due to the experience we got from this official and his team," he added.

Kenya Airports Authority management said the three will be rewarded for their kind gesture.

I commend the employees for doing the right thing,by returning the lost bag of money.I am also disturbed by the notion that these individuals are being treated as"unique" for doing what is expected of them.Yes they are expected to return any lost property to the lost and found department,or office. Doing otherwise,would not only be imprudent,but would also putting their carriers in jeopady.Imagine an investigation being conducted and the trail pointing in their direction.I would hope that this fear of being discovered played part in their good conduct.
And for those who are cursing these good citizens for their admirable civic duty, think of the consequences. Iam sure some would justify taking the cash by blaming the owner for being careless.Just do the right thing and return the money.The only exception to this rule is if you found the cash and you, or any normal person truly believes that it would be practically impossible to trace the owner,I would say keep 60% and donate 40%.
As for KA rewarding the three for their kind gesture,makes me think that they were surprised by the act... I personally would not call what the 3 did a kind gesture.A kind gesture should not be driven by fear,but by unselfishness,ethics and integrity.Trust me, the fear of being caught is what lead the 3 to perform " a kind gesture" Would they exhibit the same kind gesture at all times in similar situations minus the possibility of the boss finding out?That's the test.Non the less, the owner is happy. Good ending.Always do the right thing.If not sure,employ the golden rule.You will never go wrong. What say you people?

Get off the high horse. Your being sanctimonious does not help anyones course. There is reality which most of us recognize and accept.
Yes, the employees should have returned the bad, which they did. But you and I know it doesn't always happen and to thank and appreciate the employee action is the right thing to do.
Oh, and stop feigning surpise.

Did you read my comment under the influence of some hallucinogenic drug? There is where in my commend do I imply that Iam morally better than anybody. How is to suggest that people should apply the golden rule being sanctimonious?Explain.

It smells like it. If you want to preach start a church.
You also love to show off your command of English.
You are the fool!
FOOL.

I am on this forum to make comments on stories presented by Mwakilishi.I suggest you do same.
As for showing off command of Engilish, this is not the forum for it besides that, I dont thinK I express myself any different from any other commentetors. I could write a book. How I wish I could communicate in swahili like @Ndugu Imara Daima.
@Mkirutu, there is no point in attacking people you dont know. Attack their ideas.

I wish I was as smart as you. Tell me how you got that smart? Many fools like me might get asmart as you and that would be good for humanity...What do you think?

There are still good honest people around! Nature will reward y’all!

Wow This is incredible . I wish we had more pple like that with integrity honesty and work ethics . The world would be a better place
Kudos guys , may the Almighty God who sees in the secret bless you abundantly 🙏🏿🙏🏿