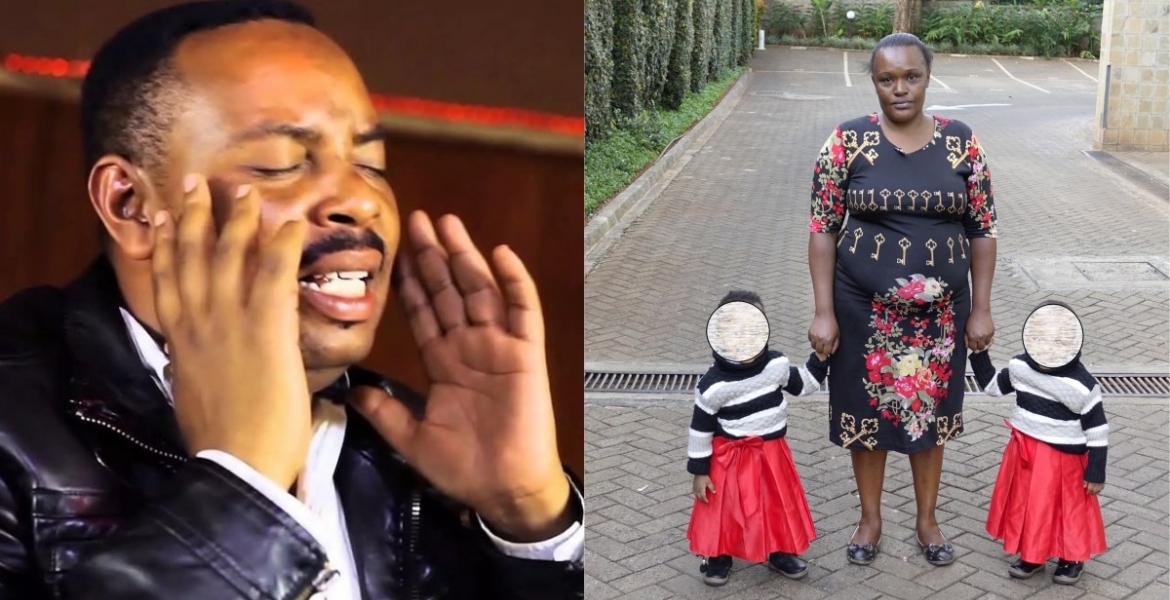 Popular Kenyan gospel singer Ben Githae has admitted to cheating on his wife.

Speaking during an interview with Radio Jambo's Massawe Japanni, Githae reveals that he cheated on his wife for a period of five years.

The musician says there were no issues in his marriage but he cheated on his spouse out of foolishness.

He also discloses that his wife and family were aware of his extramarital affair even before the story came out in public.

The "Tabia Mbaya" hitmaker further says they talked as a family and sorted things out.

He has also trashed claims by his former lover, whom they had twins together, that he asked her to have an abortion after she became pregnant.

The "Timiza" singer says his baby mama threatened him before going public with the matter.

He admits that the issue almost ended his 18-year marriage.

His admission comes weeks after a video of a woman identified as Rose Wanjiru accusing the singer of neglecting her and their twins, surfaced online.

In Kenya, it's more of a surprise when you meet those who do not step out of their marriages...yes, I said it! If you have ever worked in a Kenyan office, boundaries of friendship between the sexes, married or not, are quite blurred. People socialize at work, with neighbors etc and eventual sexual attraction is inevitable. In America, you would lose your job for sexual harassment, pronto so people keep their thoughts and feelings to themselves. The relations are quite common in churches, chamas, bus routes as well....Ben Githae's case is out just because he's a known individual! Many many more skeletons in the collective Kenyan "Closet".

Very true, Kenya is gomorrah, hakuna mtu hana mpango wa kando or kandos, even the Diasporans who relocated when they know one is in town, their sense of meeting for a cuppa has innuendos left and right- they have acclimatized to that kuhanyahanya business . However, now with the many harassment cases, working in an office in US is like a graveyard, some of us do not mind a compliment or two or harmless flirts - it makes one human and alive BUT lately, every man I know including my dentist cannot even shake hands, waving from a far distance in case a look is construed to mean something else

Not all that say Lord, Lord shall see the Kingdom of God. Run away from temptations.

Many will not like what my religion SCIENCE says.And that is,"human beings were not designed to be monogamous ".For those who dont stray iam sure you have been tempted, and that usually is the beginning .Why some yield to the temptation,and some dont has nothing to do with religion,but how much one has to loose-either financial, social,emotional, or spuriatal.

I guess he went "ndani, ndani, ndaaaniii to twins" :-)

Ndani where? Do you need to go ndani ndani tu saana ndio mtengeze twins? So if I don’t go ndani sana itakuwa kawaida, no twins?? Wish I knew this -:)

Depends on which ndani we are talking about here lol, it could be alitoa pesa yote ndani ya mfuko ndio aingie ndani, see there are various way to kuchambu neno Ndani:-). As for twins that is a blessing!

Ndugu yangu @Maxiley umesema, "..."human beings were not designed to be monogamous."

FG2! You are nasty sis! Ati ndani….seriously though, Githae really disappointed. Alafu it comes to light he was scrambling for this chick with JJ! I am no dude, lakini if I was his wife, I would be very insulted! Just saying...I mean...really? Is this the best you can do Githae? Damn!

I didn't say ndani where, it could have been ndani ya gari, nyumba, mkahawa, wee, I innocently used the word ndani tuu..ha hahaha

Btw you do know he is the one who sang this song ya campaign, hence ndani, ndani ndaaaani.

Ndugu Imara Daima, we were given brains to use and hopefully make wise decisions. As I have always said, if one has sex with a person who has no STDs ,one will not catch any thing.Trust me, not many men will have sex with a women they know has AIDS,or sexually transmitted diseases.Its each person's responsibility to keep safe not the other parties.And if we all do that, we can avoid spreading these diseases.
See where people go wrong,is that they take unncessary risk(bad decision).Yes easier said than done,but not all parties make the wrong decisions. As you know, it would be irresponsible to have sex with a stranger without protection.That's not using brains wisely.
Yes one partner who is clean and trusted is safe,and so are 10 clean and trusted partners.
It is the reckless behaviour that puts us in trouble.
Yes if a married man wants to cheat on his wife with a prostitute without protection,all he has to ask himself is ," Do i want to go home and infect someone's innocent daughter whom Icall my wife?"
Just because we were made to be poygamous,that does not give as a permit to be reckless.There are very good reasons to be monogamous.Man created monogamous out of necessity,just like he created language out of necessity.But if one cannot abide by the monogamous rules,then,dont be reckless.Be mindful others.
Also note that,STDs are rarely transmitted by accident.Therefore they could pretty much be eliminated or drastically reduced by wise choices. And it todays world just about very body knows how these diseases are spread,and not.What do you say Ndugu Imara.

Confessions of a singing hypocrite is hypocrisy itself. Listening to Githae trying to rationalize his actions by dragging all kyuk men into his tabia mbaya kuhanyahanya is utter arrogance and ignorance at its best. That type hasty generalization often lead people to believe in their own lie and go down your path of self-destruction. Two things to check before you start your chest-thumping, they say "hell knows no fury like a woman scorned" and the scripture says "Be not deceived; God is not mocked: for whatsoever a man soweth, that shall he also reap".

@Maxiley
I like how you brought up that selfish-partriachy-quip 'humans are not monogamous'...ah such nonsense. Fact: there is no scientific proof that monogamy or asexuality harms humans. If anything, it is helpful, and humans could use all the help they can get: from not spreading disease and producing too many kids.

I too as a scientist would like to remind you that in as much as humans have inborn chimp tendencies (indiscriminate sleeping around), the key difference between you and the praying mantis, chimp, bonobo or pig is that you are a RATIONAL creature - ok. the praying mantis has no brain at all. And you have the most developed brain.
Marriage, monogamy, family lines are all social constructs...and we all can see why and how they came to be because we are humans and thus RATIONAL beings.

Respectfully, its not afact that human beings are monogamous.It is a fact that they are not by nature.All these cheating, , serial marrying, divorces,prove my point.And there is nothing wrong with that so long as no laws are being broken.I have also said that, just because we have poygamous tendancies, we do not have to act upon them.There are very good reasons why monogamy is in existance.
My take is that sex is just one of the components that make marriage.There are many sexless marriages out there.Many who cheat in fact do not want to leave their partners.Especially men.may be I should say that we are not designed to be sexually monogamous.Were it the case,then we would not seek sexual gratification somewhere else after finding apartner.Were Iam i wrong.

Please not that I said they are not designed to be monogomous... big difference.Meaning that that they can go against this natural tendancy if it threatens their existence.I really do see how what you have said differs from what I have said.

Having another woman on the side is our agikuyu culture period that is if u want it or not.So the problem remains this foreign lifestyle believe about christianity will always bring bs in us.Lets remain with our culture juu it canes first b4 christianity.Ben githae the problem with u is u knew that's is what u had done but u kept denying??Such things u don't hide juu zitanjulijana tu.U accept them as they come or actually tell the pple b4 ndio hio bin threaten isiwe inakustua.

@ Mkenya Halisim, this is very interesting.I did not know that it is agikuyu culture to have another women on the side.Is it also a gikuyu culture that women should accept that?

So you have two mamas Mhalisi? Do tell:-)

could not agree with you more@ ndugu Imara.Hi dini ya christianity Inaleta matata sana. I have an uncle with 8 kids, boys,and he inherited a 3 acre shamba,the fellow depends on shamba.He is always asking me for help since he has 3kids in secondary school.His words are God has given me 8 kids.Really? How is he supposed to support his kids on a 3 acre plot that has no residental rental property.That responsibility falls on relatives like me.
I have told him, how important family plannng is.Measure you resources against how many kids you want to have.
Its apersonal choice.Again when we make bad personal choices,something gives way.
Yes we have evolved and we continue to evolve. We cut our hair, we clean our bodies, we eat vegetables we plant,non of those where there in our prehistoric past.Point being that at one point we " changed our design to fit our changing envinonment".So yes, we have to change our harmful sexual behaviour to suit our safety.

Blame it on tabia mbaya, blame it on foolishness. Blame it on whatever you want to blame it on. I wish men could stand up and say yes, I did it, if I see an opportunity, I will do it again. No, there is nothing wrong with me. The feeling came naturally and I felt the need to dip it in someone else other than the woman/man I chose to get married to. Furthermore, I owe you no more explanation on this matter, could we please carry on and tackle other pressing issues life may have in store for us. Thank you." Women and by extension men (because of the era we live in) who decide to enter into matrimony with this at the back of their minds tend to live longer. When you go into marriage with very little or no expectations then you have absolutely nothing to lose. If it turns out that your spouse will remain faithful to only you throughout your marriage, piga magoti, shukuru Mungu wako. Otherwise utadu? Will you tie them on a leash like a dog? Will you go crazy with your insecurities? Will you spend sleepless nights, worrying/ snooping around/ fighting everyone they get involved with? Will you make quick decisions laced with anger and file for divorce? Will you kill them? What, utadu?

Hey I do agree on one thing, never put 100% trust on any human being except yourself on ANYTHING!

FG2, the shade of it all! I know all his music, big fun until now. Looks like he was tapping it during the elections coz the lady in question is singing alongside him according to this clip! Men and their ding dongs...honestly, they will dip it anywhere as long as it has a pulse! https://www.youtube.com/watch?v=OcEYW7u-Hao