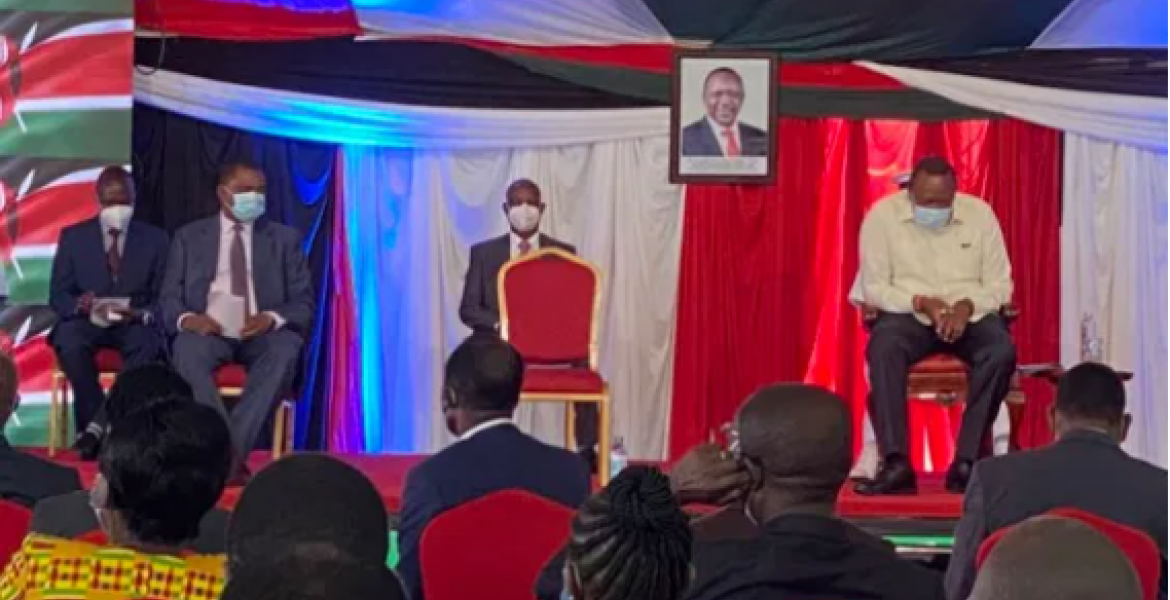 Deputy President William Ruto snubbed the launch of the collection of signatures for the Building Bridges Initiative (BBI) despite being invited.

DP Ruto’s seat at the side of the president’s sitting place remained unoccupied in the course of the Wednesday morning event.

Reports indicate his name was expunged from the event’s program after it became clear he would not attend.

Ruto has all along expressed reservations about the BBI report, saying it has many contentious issues that should be reviewed.

The launch of the collection of BBI signatures marked the beginning of the journey towards amending the 2010 Constitution.

Speaking during the event, Kenyatta said the proposed amendments seek to address the challenges that have bedeviled the country for many years chief among them inclusivity and equitable distribution of resources.

He called on Kenyans to rally behind the process for a “prosperous and united Kenya for generations to come.”

“The nation is a product of continuous evolution; it is a product made, constantly, and purposively. The tree of the nation is watered with a constant stream of ideas.   Without this, the nation will wither and die.  The only thing that is static and does not change is that which is DEAD,” Kenyatta said during the launch.

He added: “We need to strengthen the 2010 constitution, we are not talking about replacing but amending the constitution, the first of many amendments that will come over a period of time.”

BBI is for supporters of dictatorship.

Kenya doesn't need a thief and murderer. If You like him a lot you can secede and make him your president.

Right on @ Mount Kenya! Kenyans are really tired of a known thief running all over the place camouflaging himself to be a saint under the church banner! Ruto thinks people are very stupid!!

DP Ruto is not all that important when it comes to fulfilling the wishes of the Kenyan people! He has missed many more other events because he does not understand why he was elected DP of the Republic of Kenya!

Who cares what Ruto thinks or does about the BBI? We do not dine or eat Ruto! He can take the earliest bus to Sugoi or go to hell!!

Ruto is not the spokesman of the Republic of Kenya! No body should pay attention to a selfish DP who is throwing some baby tads to be recognized. Ruto should take a back seat and let those who care about the country’s future work!

The sun will still rise in the East and set in the west with Ruto or without Ruto. The sunset will be even better with Ruto missing! One guy can’t stop the show just because he feels ignored!

Very well said @mutai! These politicians tend to think they are indispensable! Surely Kenyans can do without them! We don’t need Ruto in our business! He wants to be the next president to scatter the ICC cases! We want the truth to come out and those responsible put in jail!

He has been exposed by Raila Odinga for being a power hungry bastard.

He needs to go home.

Tuache unjinga...this crap has nothing to offer. BBI means nothing to the common mwanainchi...
It's time for a REVOLUTION.

Ruto says he was not invited for BBI signatures. As a DP of the Republic of Kenya, does he have to be invited to report to the place of work? Some of Ruto’s nonsense is beyond correction!

Ruto was spoiled too much in his hustler baby days. Hustlers never work except move around at night pick pocketing and stealing from those who work hard! Anyone can clearly see the freelance bad side of a hustler in Ruto!

Is the stand-alone red chair meant to deliver a clear message that Ruto has already been fired as the DP? Sometimes what you see speaks louder than simple words!!

And we saw how deep in the hole America went in the past four years because of the insecurities of a seating president!

Ruto would even worse! Ruto would be a million times worse as a Kenyan president! Even worse than the Magufuli of Tanzania!

Kenyans do not want to be escaping to South Sudan or Somalia to look for asylum during Ruto’s presidency!