I Will Retire in 2022, President Uhuru Says 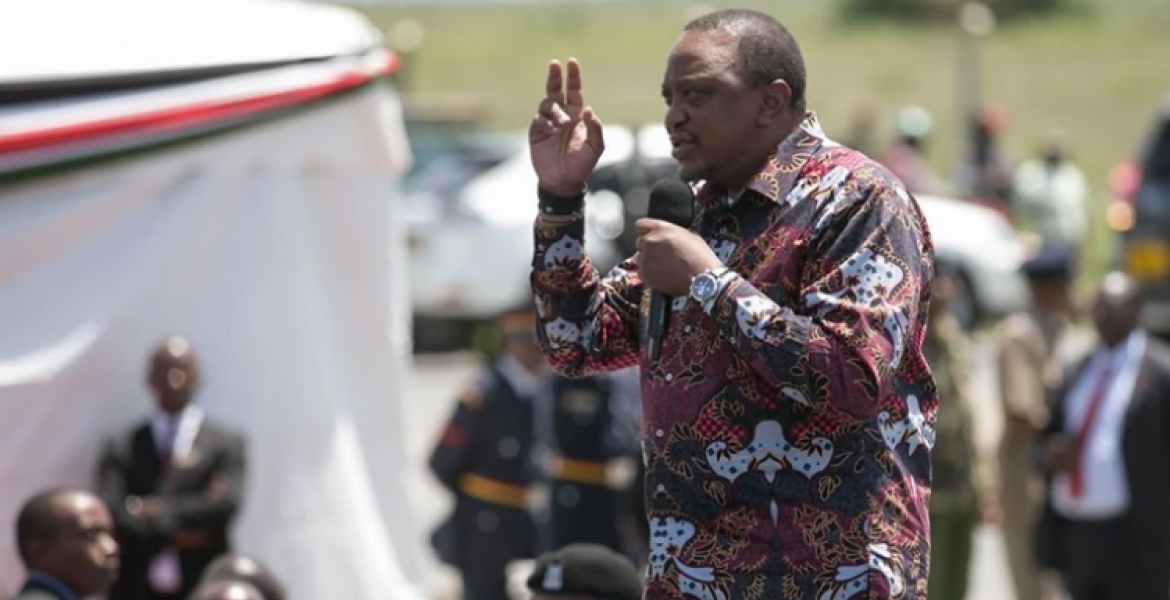 President Kenyatta has trashed claims that the Building Bridges Initiative (BBI) is meant to create a position for him after the expiry of his term in 2022.

Kenyatta, who spoke during the commissioning of JKIA-Westlands expressway on Wednesday, insisted that he will retire from politics once his term ends.

He said BBI, which was formed after his historic March 9th, 2018 handshake with Orange Democratic Movement (ODM) leader Raila Odinga, is about peace.

Kenyatta at the same time exuded confidence that with the help of Odinga, the BBI will sail through, terming those opposed to it as conmen.

“BBI is not about giving me a position. It is about ensuring there will be no bloodshed in this country. That process, with help from my brother Raila, I am sure will pass,” Kenyatta stated.

He added: “We will be back with BBI very soon. Let no one lie to you that it is about politics.”

The president indicated he wants his legacy to be uniting Kenyans and making sure no one sheds blood again due to politics.

“If there is a legacy I want to leave, it is that of unity so that no more blood is shed because of politics,” he noted.

Peaceful development of the nation is the greatest legacy Kenya will achieve. No more rotten and divisive tribal politics. One Kenya! One people!

Mr. president, you cannot leave a legacy of unity by planting division. You abandoned your own deputy and your mandate to peacefully lead Kenya when you went for a fake handshake with a man who has spent the whole of his life dividing Kenyans one against the other. You took a political prostitute for a statesman. Raila has traversed restlessly across our nation, joined hands and conned every imaginable leader anywhere in the land: the late Kijana Wamalwa, Moi, Ruto, Charity Ngilu, Martha Karua, Balala, Kalonzo, Mudavadi, Weta, Saitoti,Kenneth Matiba,among others. This man Raila had hundreds(could be thousands) of Kenya's Airforce best hanged and imprisoned by Moi during the 1982 coup attempt that he staged in Kenya. As for him (Raila), he got himself a British lawyer and walked away from prison into freedom.(by the way most of those airforce men were Luos, shows you he is an equal opportunity disaster). During the 2007/08 PEV this man and Ruto had innocent Kenyans burnt alive in a Church! simply because his votes didn't add up. Some who perished were children who were not even old enough to vote! If Raila is the unity and legacy you are promising Kenyans, then our goose is cooked. The best you can do is walk out after your term ends and leave Kenyans alone to determine their future. We know what Raila is capable of doing (he was prime Minister) and we have seen your childish and cowardly leadership that could not put a single big fish corrupt goon in prison, yet billons of shillings of public funds is illigally transferred into private pockets- while children are daily crying for hunger, medicine, clean water and a decent education. Yes you should be gone already and take your conman brother Raila with you. Get lost!

He’s lying.
What has Unity done for Kenya?

It’s better to try a divorce.

Unity has failed in Kenya.

The constitution requires that you leave office by that time .Wacha ujinga do not assume you are that popular Kenya is not Uganda Hilyo kiti si ya mama yako

Kenya is worn out and tired of Dynasties. Kenyans are ready for a change. We cannot keep doing the same things expecting different results. Please take you, your brother Rao and Ruto with you.
Under your leadership, Kenya is headed for renewed recolonization due the greed demonstrated by our "so called leaders" under your leadership.
Corruption under your leadership has increased a hundred fold in every sector where our leaders have a stake, including Banking, Kenya Airways, now attempting Kenyatta public hospital and the list is endless.
You,Raila,Ruto and your kind will do Kenyans a favor by exiting the scene. You are all a product of Moi who whether knowingly or otherwise destroyed our country to where Kenya was taking its books to Washington; and you and Rao are following his footsteps.
May the real God of Kenya create a different path for our country and remove every trace of colonialism and corruption that has devoured our country since independence!!!

BBI was a cheque to artist formerly known as "Kimundu kimuguruki". Lot's of mney wasted that could have been spent to uplift kenyans.

Do we have to wait for 2022?? If we have senses just pay his accrued leave and salary. It’s better to leave his position in government vacant. Difference will be same.. in fact may be better