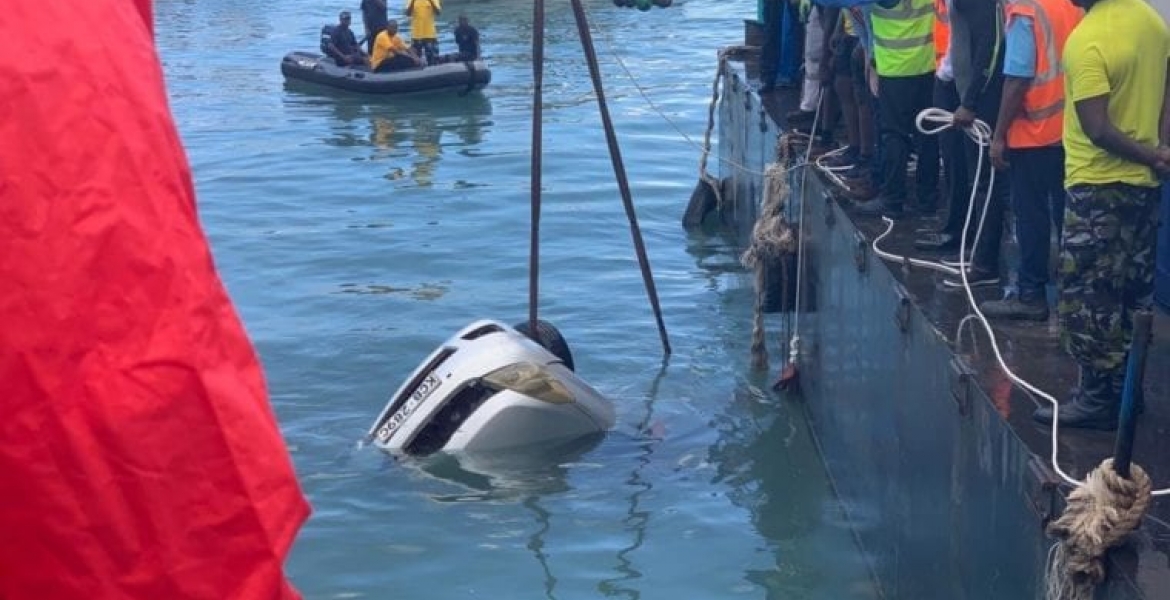 The vehicle that reversed from a ferry and plunged into the Indian Ocean 13 days ago with a Kenyan woman and her daughter on board was on Friday afternoon pulled out of the Likoni channel.

The car bearing registration number KCB 289C was retrieved from the ocean by Kenya Navy personnel a few minutes past 4 pm with the bodies of the two still inside.

A crane was used to pull the car out of the water as Red Cross officials prepared to take the bodies of 35-year-old Mariam Kigenda and her 4-year-old daughter Amanda Mutheu to the mortuary.

John Wambua, the husband of Mariam and other family members witnessed the entire exercise from the shores of the ocean. They have been camping at the scene since the accident happened on September 29th.

Detectives from Directorate of Criminal Investigations (DCI) were also present as the car was pulled out, according to Citizen Digital. The officers are conducting investigations into the incident.

The retrieval of the car came two days after government spokesperson Cyrus Oguna announced it had been sighted with the help of technological equipment.

He said the car could not be removed immediately due to channel traffic, huge ocean currents and scheduled docking of ships.

I wonder what is more important, pulling the bodies or sijui ship schedules.

If the deceased were a Mama mboga gone down the waters with her Child clinging on her back in a Lesso, this story would never have made headilines like it's still doing as we speak.

having served in the navy, rescues are different from retrieval exercises. Currents also do play a very important role and in this case I guess commerce too.

This was very sad. I'm wondering the condition of the bodies since they've been submerged under water for so long.

From this article you'd think the Kenya did it all by itself... Why down-play foreign players? Slighting South African help to a sentence on the last para actually shows some inferiority complex on our side. Style up and treat others as you'd wanted to be treated. Trumpism is catching up too fast.