The bus slowly drove into the city as the outlying suburbs gave way to cheap tenements that straddled the Atlantic, each claiming its right to exist against the backdrop of New York City’s superlative skyline. In a few minutes, the journey would be over with and I would breathe a sigh of relief as I finally ducked into the Starbucks on 42 nd and Broadway to charge my phone and buy a coffee while staring at the packages of Starbucks’ KatiKati blend coffee.

If anything, I considered the packages ironic; even odd that I would find a package of coffee so intently branded. In Nairobi, you would be proud to say you chose Dormans or Nescafe over Kahawa No. 1. The local Kibanda; that staple of Kenyan restaurateur ingenuity, will sell you a “Kahawa Kifo”, a tough as nails brew of Kahawa No. 1 boiled to perfection - the working class version of Red Bull. How ironic then that so far away, premium coffee would have a Swahili brand name.

I exited the coffee shop and was soon on the way to the observatory at the top of The Rockefeller Building to stare at the views. I love skyscrapers and the views they afford. What I love most about them is their ambition; each story rises to defy the record set by the last. New York’s skyscrapers are then testament to their builders’ ongoing commitment to excellence. The first record, the Empire State Building, was set during the Great Depression in 1931. Since then, other buildings have risen to claim and exceed the records set before them.

As I look around Nairobi’s younger skyline, I see the same: a nation of builders striving to meet the records set by the generation before them. At the heart of Kenya’s current rise are firms like Cytonn; rising against the establishment and all odds to do business in a value-based way that not only provides excellent client service but also impresses on employees to conduct business with integrity, accountability, excellence, team spirit and ingenuity.

Kenyans in the Diaspora should have a share in the opportunity Kenya is creating. At Cytonn, we believe that Kenyans in the Diaspora deserve world class client service they are accustomed to having in their adopted countries; we also believe that they should have the ability to hold businesses accountable to their claims and promises. We are proud to be the link that connects the Diaspora to several attractive investment opportunities available at home. There has never been a better time to invest back home; there has never been a better partner than Cytonn Diaspora.

We urge you to stay tuned to our website and visit us at www.cytonndiaspora.com/community/events to view the schedule of roadshow events and RSVP. 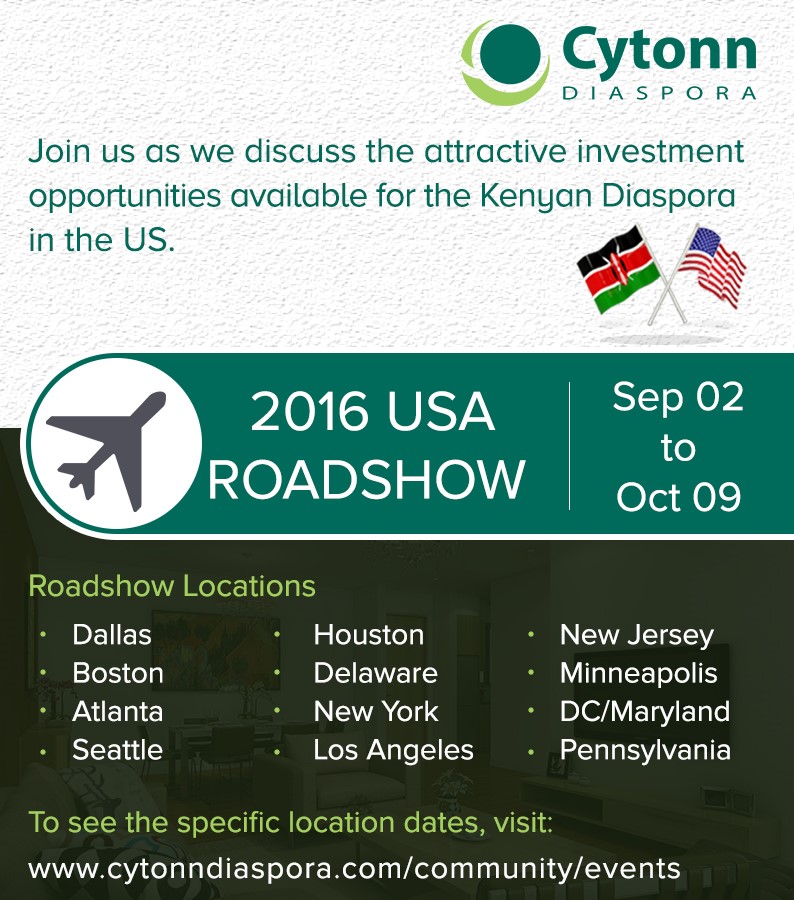 The author works with Cytonn Diaspora

Great article! Go Cytonn, you are the best!