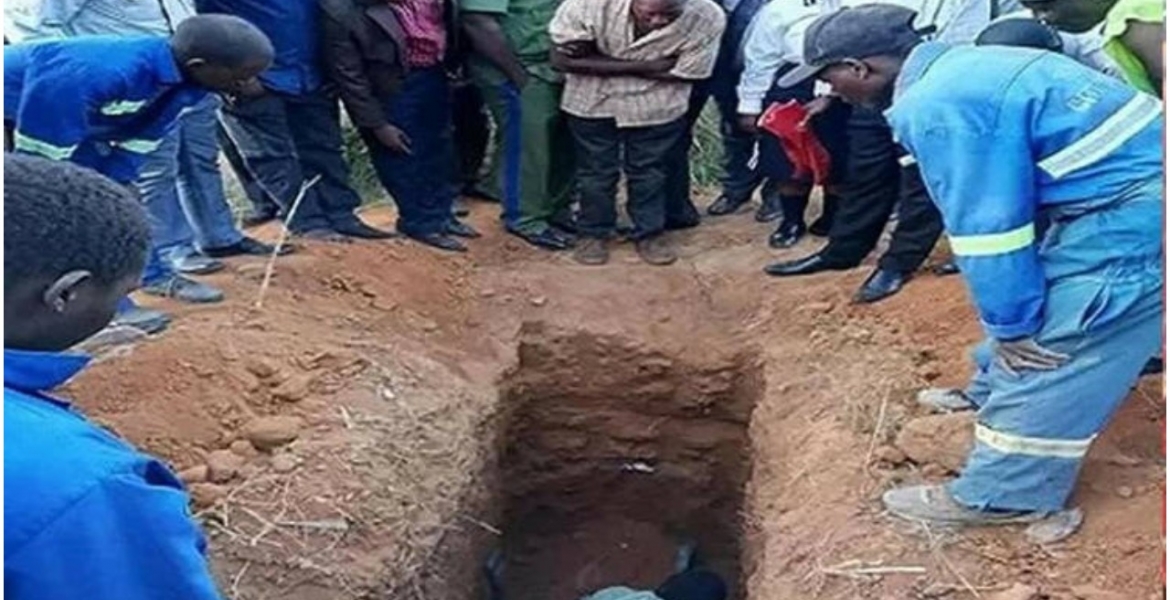 A pastor in Zambia has died after he was buried alive by his followers.

Pastor James Sakala of the Zion Church in Chidiza town claimed he would resurrect after three days, just like Jesus the son of God.

“All ye of little faith, bury this Sakara you see now and he shall arise from the dead and breath his free lungs full again!” he allegedly told his followers before being buried.

Dressed in a white gown, a pair of leather slippers, and his hands tied up, the clergyman was buried alive in a shallow grave by three members of his church.

The 22-year-old assured his followers that he would come back to life on the third day but they found him dead when they dug up the grave.

Reports indicate that Sakala’s soiled gown was covered with mucus and blood, an indication that he struggled to death.

Police arrested one of the men who buried the pastor alive while the other two suspects are still at large.

Sakala, who left behind a pregnant wife, was later laid to rest at his homestead.

Tragic for his unborn child but net benefit for Zambia. Zambia's collective IQ just rose, he won't scam any more gullible people, no need to raise money for his funeral, and only one of his progeny will ever be born who with luck will have a ready life lesson on stuff you don't do. It's interesting when the garbage takes itself out.

Come on @ Guest1,the issue here is coming back to life after death. To me its irrelevant where he drowned,had heart attack and laid in a shrine.If you can heal the dead,certainly you can blow off the soil on top of you.
Anyway, classic example of blind faith.It does not work.The followers should have demanded for the pastor to heal a blind person, or a cripple the way Jesus did as a proof that he could do more than just heal.

These cons always have someone planted and if the "miracle" doesn't work then someone's faith can be brought into question or spouting crap like God has a bigger plan for you and things always happen for a reason. This basura is now worm food.

The devil has the last laugh...Thou shalt not tempt the Lord thy God.

@ Kenya, is there anyway, he could have performed amiracle without tempting God.I mean,just like Jesus did "without tempting"God.In other words,when we ask God to heal the sick,are tempting Him? Where do you draw the line between tempting,and asking God for genuine help...? I wanna know.

@Maxiley, Jesus did not throw himself down to tempt God if he will send his angels to bear him up. The people you are talking about are already sick. Jesus did not make them sick and then healed them.

Could you please re read my questions again?

is this 2021? information age era? really? please don't tell me all these people live under a rock or uneducated! wasn't there even one person with half a brain to stop all this or report it for that matter! c'mmon afrikans lets stop with all this mediaval thinking, we can do better

Who knew one could die from lack of oxygen. Looks like assisted suicide. He should have practiced first in a casket without being buried with a cell phone just in case. At least they could have left a hole for breathing. But again if it rained the hole could have been blocked with mud. Being locked in a closet is tough let alone a casket.

Huuum! Sorry guys! We have seen it all in this world!

unfortunately he wont be around to tell us how being death or being buried alive felt like. Poor man

Another conman bite the dust. I only feel sorry for his family. So sorry!!!! Religion is number one con game. Always look at yourself in the mirror. Ask questions. I pity millions of our Wananchi who believe this crap. If you really want to get ripped off go to a casino.

Well that didn’t go as planned. Let’s have a do over

When WaAfrika follow wazungus, they become as washenzi as they are!