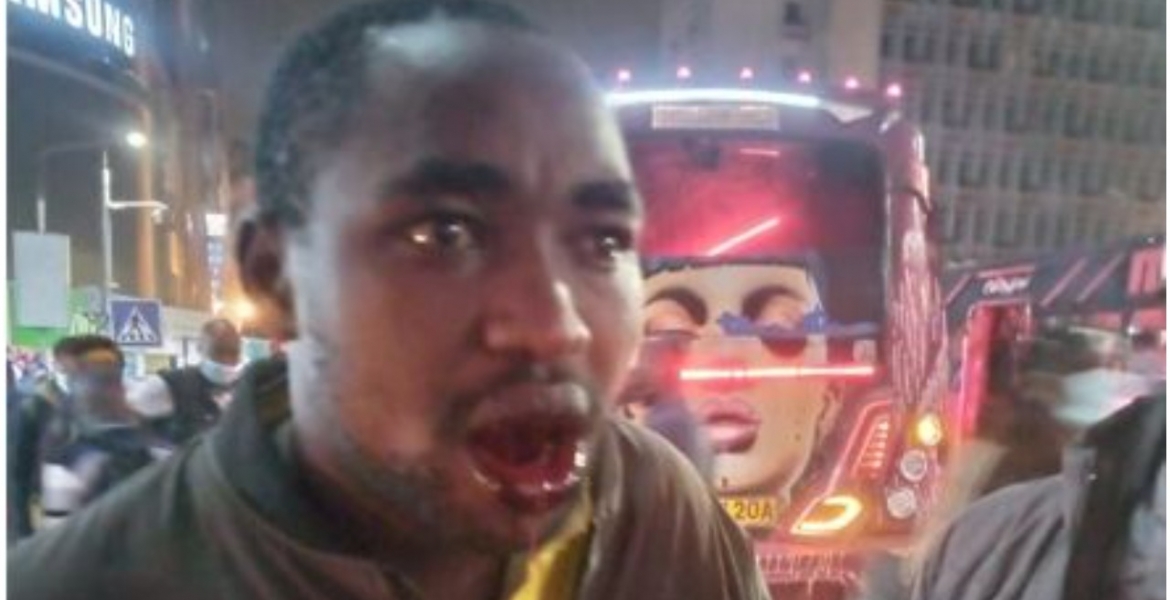 A family in Nairobi is demanding justice after their kin was brutally attacked by three Nairobi City County askaris.

The askaris allegedly plucked out all his teeth after he failed to give them a bribe of Sh100 on July 2nd.

Antoney Maina, a socks hawker in Nairobi CBD, was on his normal duty along Tom Mboya street when the three enforcement officers approached him and demanded the routine bribe.

Unfortunately, the 25-year-old only had Sh20 in his pocket which the officers declined saying it was too little.

His brother Elias Mwangi says the askaris handcuffed Maina before assaulting him using a metal rode and fleeing in their county van.

“My brother is struggling to eat. He can’t chew anything. He can only take porridge and juice using a straw,” his brother Mwangi told K24 Digital.

“We took Antoney to Mama Lucy hospital where he was admitted but the damage on his mouth is severe even after doctors stitched the badly damaged lower jaw.”

The family reported the incident at Central Police Station but no action has been taken two weeks down the line.

Comrades, I won't comment on this.
But things have to change in Kenya.
BY THE BALLOT OR THE BULLET, BY THE BIBLE/ KORAN or the GUN...ANY WHICH WAY FREEDOM MUST COME.

MuKenya left BUXTON tunnel yesterday and can explain why city askariis attacked Maina in Nairobi,Haven Kenya-26 miles from Misri,Limuru.Halisi and Mwangi should hire a gang to mercilessly revenge for Maina.

@Morris I will wait with bated breath to hear whether Mkenya Halisi the Kenyan patriot does anything. He is somewhere freezing Limuru near the fire kwa ka-plot akikula tatu na kuweka saba.

Looks like his teeth were knocked out rather than plucked out like at the dentist’s. Nevertheless the askaris need to be answerable for their Inhumane action. They should also buy the poor dude dentures.

Very very sad,and shameful to our society.This is an indictment of our society today.We dont seem to value life of some citizens.Meaning we are not equal under the law.
@ Ndugu Imara Daima,how can we say we are independent when we deny our fellow Kenyans freedom,and pursuit of happiness.
For not getting Sh.100 you inflict such pain,and damage.How I wish same damage could be visited upon these askaris...
Folks, these evils happen because we allow them to flourish.We let teachers impregnate school girls ,and bribe their willing parents.We bribe official to get jobs with fake documents.We let killers run our government,on and on...Given this backdrop,things are not going to change.Change will only take place when we take some action.Not just talk,but act. Action starts by electing worthy candidates.So folks,come next year, clean the political slate,and drain the swamp.
Yes@ Comrade Kora Kanini,things have to change.Surely how can they not with the direction Kenya is going?

Looks like those who should enforce laws are mkoloni mamboleo.
The public just watched when they normally intervene with mob justice?

Where are all those do good lawyers? Please help this guy and also help apprehend these animals,the so called kanju.

He is lucky . In America his brains would have been blown to smithereens.

I don't call this luck. He lost his teeth for lack of 93 cents (less than $1). To put it in perspective, 31 cents per corrupt policeman. Sidhani aliuliza meno yake yatolewe. Hii si "utumishi kwa wote" unless you call involuntary dental extraction a service. This is a message to those that can't or won't cooperate. It's how violent criminal syndicates operate.

He is lucky . In America his brains would have been blown to smithereens.

As a strong believer in MELTAS (mathematics, engineering, languages, technology, agriculture, Sciences), I honestly don't see why we can't wipe out corruption in less than a month by asking all citizens to video-tape any action where the government official is soliciting for a bribe from the poor Kenyan people and report them to Matiang'i immediately.. Kenyan people have smart phones and this technological gadget can tame the rampart corruption in our country in less than a month.

We have Ndugu Ruto opening his campaign offices in the USA with his offices labeled "Hustler!" Is he aware that the word "hustler" has a negative connotation in the land where the English language is spoken by all citizens of the USA?

This is the same man (Ruto) who started campaigning for the Kenyan presidency as soon as he took the oath of office for the second time. This man has been campaigning vigorously all over the country while his diehard followers are not wearing face masks or required to do so! In addition, he took his course work, did his research, wrote his doctoral dissertation and defended it while using pubic funds to accomplish personal and selfish goals.

Just imagine how Kenya will be if he takes the oath of office come 2022 after winning the presidential election!

You wrote, "...Given this backdrop, things are not going to change. Change will only take place when we take some action. Not just talk, but act. Action starts by electing worthy candidates. So folks, come next year, clean the political slate, and drain the swamp." I totally agree with you Ndugu on your objective assessment on how to solve Kenya's challenging and pressing issues.

In conclusion, I would like to conclude by quoting the former leader of the Anglican Church in Cape Town, South Africa Ndugu Tutu who once said, " If you are silent in situations of injustice, you have taken the side of the oppressor."

@ Ndugu Imara Daima,the most advanced countries in the world strongly believe in MELTAS,and less on retrogressive customs of yesteryears.They question,pock,twist, turn,and dissect issues with critical scientific probing.Mare blind faith or beliefs are discouraged.Is there any wonder that these are the least corrupt countries in the world.Some have given lame excuses for our poor performance by stating that we are a relatively a young nation.Come on.What has that got to do with corruption. Do we have to be independent for 100 years to know the evils and destructive forces of corruption? We cann't the that slow minded.
We need integrity in our politics.Again, so long as we elect untrustworthy public servants,our public institutions shall be plagued by,corrupt police, corrupt judges,corrupt athletes, corrupt,teachers,corrupt preachers,corrupt doctors,and the list goes on.Is there any wonder that we hardly see any noteworthy progress? WE NEED INTEGRITY IN OUR POLITICAL SYSTEM.Meaning,no votes for people who have a questionable past,and present.Otherwise they will carry their evils in to the future. Basically ruining the future of the country.

Absolutely shameful!, It's not even the first time!, had One time witnessed them plucking out a thumb finger on one of the hawkers. This have been happening for a long time. They are hired to take bribes instead of finding a solution to the poverty affecting most Citizens.

Absolutely shameful!, It's not even the first time!, had One time witnessed them plucking out a thumb finger on one of the hawkers. This have been happening for a long time. They are hired to take bribes instead of finding a solution to the poverty affecting most Citizens.

I personally think our major problem during the election time is the lack of transparency is clearing out people who are not fit to run for any public office.
Everybody in power knew very well about Ndugu Sonko and his past criminal activities which landed him in Shimo la Tewa prison where he escaped without serving his full jail time.
How come he was cleared to run for any public office while his decadent past was known by those who matter!

I suggest that the DCI (Directorate of Criminal Investigation) and the EACC (The Ethics and Anti- Corruption Commission) work together come 2022 in clearing all potential candidates before their names are presented to The Kenyan people.

If this commission is instituted, Ndugu Ruto and others like him will be forced to retire from active politics immediately.