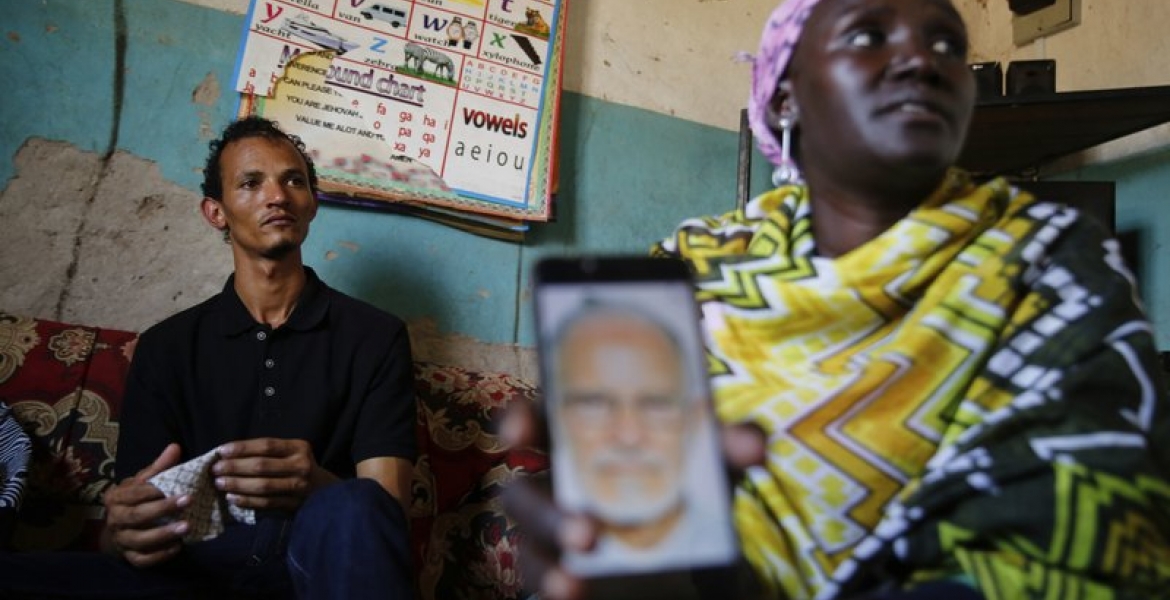 Gerald Erebon Sits with his aunt Scolastica Losirkale as she holds a phone with a photo of Rev. Lacchin [Photo/AP]

The Vatican is investigating claims by a Kenyan man that his biological father is an Italian priest.

Gerald Erebon says his birth certificate lists a black Kenyan man as his biological father, but states that he [Erebon] is light-skinned, tall with curly hair, and looks nowhere close to the main listed as his father, who is dark-skinned. He also says his mother is dark-skinned as well, and are his siblings. He says this has made him feel like an outcast his entire life.

“According to my birth certificate, it is like I am living a wrong life… I just want to have my identity, my history,” Erebon recently told the Associated Press.

Erebon says word around his remote village in Archer’s Post, Samburu is that his biological father is Rev Mario Lacchin, an 83-year-old Italian priest who ministered in Erebon’s village in the 1980s. It s believed Rev. Lacchin impregnated Erebon’s late mother, Sabina Losirkale, when she was 16 years old. Rev. Lacchin, who was in his early 50s at the time, has refuted the claims, but has refused to take a paternity test.
The Vatican has opened an investigation after Erebon’s claim was brought to its attention in May by Vincent Doyle, an advocate for children fathered by priests.

Sabina’s sister, Scolastica Losirkale, says she recalls seeing Sabina and Rev. Lacchin hugging. She also says some nights Sabina would come home crying, and other nights she would not come home at all.
“I think Father Mario was taking advantage of my sister. He bribed her with gifts, food, clothes. He was even buying us books. My sister used to come with books, pens, all we needed,” Scolastica says.

The people of Archer’s knew it was Father Mario. The people knew that the priest was responsible. Because even the boy — he resembled the priest when he was born,” said Alfred-Edukan Loote, who taught Erebon in primary school.

The Associated Press reached out to Rev Lacchin for comment but he did not respond to their email, text messages, and phone calls.

Erebon says he wants the truth to come out. He also says he wants Rev. Lacchin to help him and his two children obtain Italian citizenship. “I just want to have my identity, my history, so that my children can also have what they really are: their heritage, history and everything,” Erebon tells the Associated Press.

Wah, talk of ghosts coming after you in your old age. These 'white' catholic fathers....many left a trail of pointees that had some resemblance to them. Not as 'lucky' as the 'black' fathers/mubea....many have sired kids with former nuns (de-clothed after pregnancy) and/or other women in their jurisdiction. While some have left the women holding the babies, a good number take care of their kids secretly, if not excommunicated. A small number has left fatherhood or joined the charismatic Catholicism, gotten married and continued to minister.

Given this history, and the sickening SODOMY in the Catholic Church, it's a high time to re-write the rules and LET CATHOLIC PRIESTS MARRY.

Correct. Black priests have lots of pointees out there in Kenya. The "victims" know it, their parents or husbands know it: But no one speaks out or talks about it as if these Immoral priests are Untouchables. Wrong!

Another peodophile 83 years old still hiding from the truth.DNA does not lie.This Catholic Church needs to drop this celibacy maneno most priests are busy abusing the flock how come I have not heard of nuns taking advantage of alter boys.Is it not time the church allowed women to lead obviously the men cannot be trusted to keep it in their pants

"A culture of silence and compromise” that has allowed abuses of all kinds to fester in African society. The priest is very alive roaming free in all parts of Kenya after defiling a 16 year old girl, getting her pregnant and God knows how many more unreported cases. Even after the Vatican and interpol were notified. Can you imagine a Kenyan committing such heinous crimes in a foreign country? What's wrong with the Catholic Church? Yaani foreigners walking all over Kenyans kama ghasia

Poor man. Lakini he needs to be careful he does not open a can of worms by wishing to obtain Italian citizenship. It will confuse you even further and your sense of identify may further be damaged as you struggle to reconcile with the two worlds. Shame the priest and get the compensation, lakini tulia nyumbani. That's your history bro. The other fraction has nothing to do with your upbringing.

Italy or Kenya: Kenya is best. So don't bank too much on Italy.

Strange that the prist ,aman of God does not want to cooperate for a good course.Why is he refusing parternity test?Worst he is rejecting is flesh and blood.Not good.This is poor example of a priest.
As I have said before, the Catholic should reconsider its stand against women being priests. When it comes to sex, nuns hardly have any scandals...They would make better priests.

Nuns? Their stories are even juicier than those of there 'brothers'. They too should be allowed to get married. This is a flipped Dolly Parton song; Just because I am a 'man'.

CELIBACY call is what has made the catholic church have these sexcandles more than the other churches........ otherwise, other churches too leave a lot to be desired.

@Maxiley,did you mention nuns? You ain't heard nothing yet.

@ Mugikuyu, seriously I have not heard any scandal involving NUNS.That does not mean that they aren't there,but Imy point is that they are less and far apart compared to priests.

Over the years, I have lived in two US Cities, home to institutions that offer graduate and post graduate studies to Catholic priests. I have seen many East African, mostly Kenyan, priests come through. I have yet to meet ONE that is not a womanizer and/or drinks heavily. The charade of requiring celibacy needs to end judging from these East African priests. A few years ago, we had to beg a Zimbabwean and an American woman not to file attempted rape charges against a Tanzanian and Rwandan priest who attempted to forcefully have sex with the two ladies.

@ Nani, you should have encouraged the women to file charges and have the lusty priest get his due in court. What you did is no different from what the Catholic church did by trasfering priests who had molested boys.
I honestly dont think that celibacy has anything to do with bad behavior from priests. I say this because many men outside priesthood are caught up every day in sexual scandals.
These so called priests are just in the wrong profession.That's all. It is also my opinion that NUNS would make better priests.This is something the catholic church should consider.Women are equally capable of preaching,if not better than some men as we have seen.Otherwise we shall continue reading of these scandals...

These things happened between the year 2000 and 2003. Now that I am a parent, I'd probably do something different, Not sure though. Priests and pastors have had their way with so many people over the years. I get shocked when people I know allow them into the decision making of a significant portion of their lives.

Religion is nothing but a con game. Many foreign priests have done enormous damage to Africa and south America. Open your eyes and ears. Think for yourself.

This is not new, we've seen this cases over and over again.
Parents need to protect their children, no matter what.
Don't get deceived by them buying you presents and stuff.
But looking it at a different angle...
We don't question what priests or pastors say, we are fooled into thinking that some of them are holier than thou....
We all have witnessed where even married women will jump in bed with or even pimp their children to them.
Another thing is, how did he even leave Kenya after the story broke.
Corruption again...
Sad to say that most of us will sell their loved ones for a shilling.

Catholic priest should be allowed to marry many wives just like Mormon.

Roman Catholic church should be investigated and exposed in Kenya and in Africa. It has done more evil than good. Since imperialism when the missionaries showed up with a bible on one hand to cover their lifetime blessing-the gun on the other. In 1985 a small sex Scandal of Roman catholic Priests was investigated and exposed in America by the "Boston globe".
The results were such that: 55.7% of the Priests had one formal allegation of abuse made against them; 26.4% has two or three allegations;17.8% had four to nine allegations and 3.5% had ten or more allegations. All these and more can be found on " John Jay Report".
Our people should be encouraged to come forward unashamedly and expose the "holier than thou" Catholic church. In USA, in 2012 Msgr. William J Lynn of the archdiocese of Philadelphia became the first senior official convicted for covering up of sexual abuse of children by the priests he oversaw. He was sentenced to 6 years in jail.
With that in mind our people should expose the Church. In the name of spreading christianity, what else were they spreading? Homosexuality; pedophilia etc.at the same time calling our beliefs backward. This is information age and a time to expose every foreign evil that has a godly coverup on it. Be it Christianity; Homosexuality;Beastiality and all other evils that were planted or are currently being planted in our society.
Ref: Boston Globe Jan 6,2002 1-2 "Church allowed abuse by priests for years"
Wikipedia "Catholic church abuse cases in the United States
The John Jay Report
The result is that the Catholic church ended up paying millions to its victims, such that some dioceses filed bankruptcy (In the United States). This needs to take place in Kenya and in Africa and once fully exposed the church should leave Africans alone and set up shop where it came from- Europe as part and parcel of the Roman empire.