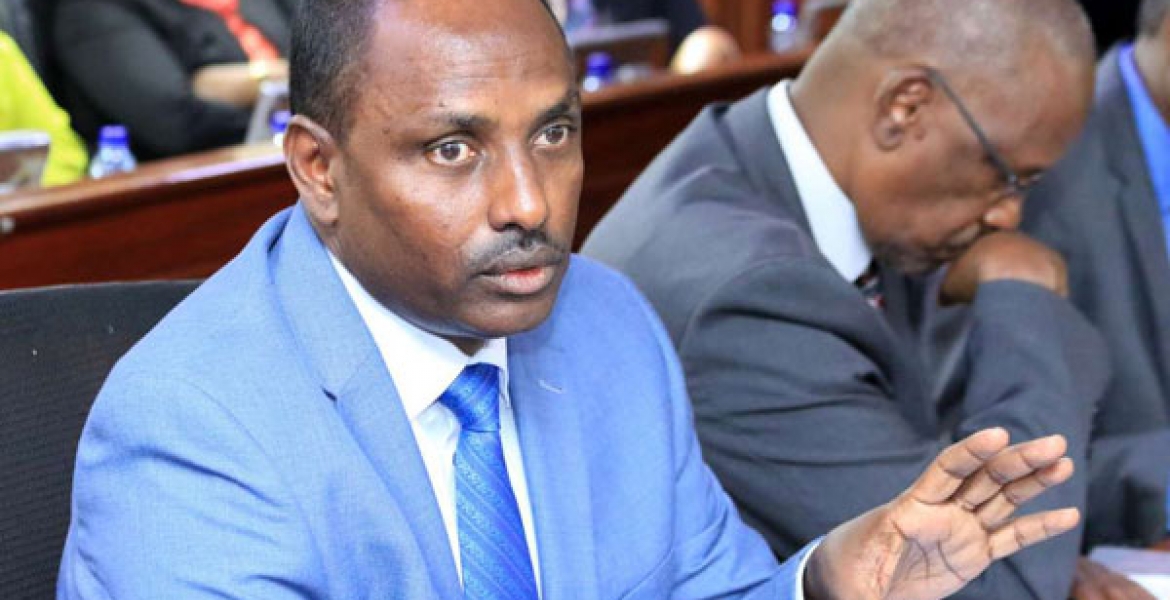 The government is working on plans to encourage unemployed Kenyans to seek jobs abroad.

Labor Cabinet Secretary Ukur Yatani says his ministry is in the process of reviewing policies to prepare Kenyan job seekers for opportunities overseas.

Under the new plan, the Labor Ministry seeks to have job seekers taken through an elaborate pre-departure training on language, culture, and rights.

Yatani also says the government is seeking to sign agreements with host nations on the welfare of Kenyan workers.

“We will sign a bilateral agreement framework for Kenyans to work abroad, which will extensively address their welfare, housing, transport, and home visits when they want to reunite with their families back home,’’ notes Yatani.

The move is part of the government's plan to address the high levels of unemployment in the country.

CS Yatani says Kenya is mainly targeting countries with a deficit of skilled workers. Such countries include the UAE, Jordan, and Canada.

Citizen Digital reports that the Labor Ministry under the newly operationalized National Employment Authority (NEA) plans to export one million jobs in the next three years.

The Kenyan diaspora workforce is currently estimated at four million with 500,000 of the total working in the Middle East.

Qatar, Saudi Arabia and the United Arab Emirates (UAE) have the highest number of Kenyan workers, a majority of them employed as domestic workers.

WHAT A TWISTED MOVE AND LACK OF VISION.
The government has been unable to manage the economy.
Why can't this government find solutions from within?
How many jobs would be available to Kenyans if all the clothes we import are made by our local tailors and textile industry?
We buy used clothes (dead people's clothes); Italian shoes; expensive suits; fake hair;exotic furniture;imported sugar; maize; high end vehicles; go on expensive vacations overseas,foreign foods-in other words things that we can produce locally. By so doing we create thousands and thousands of jobs for people in India, USA,
Britain; China, Korea and all other places except for our people at home. All the workers all over the world who make things we buy from abroad are essentially employed by us with our money while our own youths are loitering aimlessly in our town and villages without jobs. How dumb is that?
We lease our land to foreigners, denying our people means of production in their own country.

We bring foreigners to invest in paper moving businesses that produce nothing but take from us all. Businesses that our people are capable of doing.
We bring foreign Engineers; Accountants; Lawyers; and all types of people who call themselves "experts" while we do not employ our own.
We bring foreign doctors (Cubans), pay them more than our own and then look for translators.
We teach our children in foreign languages, then we find foreigners who are "experts" in those languages to come and teach .
Language is a political weapon.
We bring foreigners to build cheap houses while we can employ our own.
Those who are coming to build have homelessness in their own countries and we don't even ask why
We bring in foreign medicine that can be home made.
It's lack of vision on the part of our leaders that is creating unnecessary hardship for our citizens.
Mismanagement and corruption has sold our people into slavery in the name of employment.

Well said. The solution is to export goods and not kenyans. Kenyans want to work in Kenya.

What you say makes perfect sense. Unfortunately the nitwits, halfwits and other assorted twits and crooks in charge probably think that there will be exponential growth in diaspora remittances if they can only increase the size of the cash cow by a huge factor. However due to this lack of vision, they fail to see the growing nationalism and resultant racist xenophobia across all nations regardless of economic stature and what this portends for those they are attempting to send out to foreign countries. The govt. is not famous for protecting its citizens in or out of Kenya and I foresee abuse and human trafficking following these moronic policies. The Kenyans I know, are hardworking and Kenya has managed to stay afloat in spite of and not because of the leaders. Moi purposely backed the fox to guard the henhouse knowing his fox brethren would protect him from any real consequences. A true reckoning on corruption with real consequences would move Kenya to the fore and make these idiotic and shortsighted ideas irrelevant and unnecessary. While on that, anyone know what happened to the lifestyle audits?

Count me Out. For I shall NOT be a Slave to the Ishmalites (the Arabs) or to anybody else. But you that are Willing to be Slaves, you Go! Meanwhile: So help me LORD.🙏

That is why they are allowing human traffickers to take people to middle east to be slaves. They want to show the figures of how much people in diaspora send to Kenya.

You mean money that is what is keeping the KES AFLOAT that is the only reason diaspora is being mentioned billions 1st quarter , second quarter .

It is one thing for foreign nations that are short of labour force to seek workers from outside but to go out and beg foreign countries to fill there labour gap by employing unemployed kenyans is am open venue for gross abuse.We should create jobs for ourselves. Are we incapable ?.Isay not.We just have to have the will to do so.

Theft, poor management of our resources but - CORRUPTION- is the main hindrance to growth in Kenya To get a teaching job with TSC one has to apparently bribe with kshs 300,000. a trained graduate salary is kes 30,000 per month gross- even if one had 300,000 to bribe and pretend is investment when would the profits be realized.
someone told me a certain person got a job as a teacher after many years of holding a TSC number iwas informed she was very lucky to find someone who could accept 200 K . in the past trained nurses / teachers / technicians etc would be posted to work places . why are we left to apply for jobs when there are vacancies . There is shortage of nurses and teachers including technical ones. our village technical training centers are dead cause there is shortage of trainers - we have an incompetent government we are being administered by idiots , thiefs ignorant who get their posts because they have failed and are sons/daughters of so and so pay back for voting for them idiots . now they want to look work for us abroad to go and clean dirty arabs behinds and for that we are abused. Kenya needs CHANGE OF GUARD

we need as a people to say enough is enough and get out these goons out of the office, all of them are devoid of any progressive ideas, we are being led by people who thinks being developed is sending your kids to foreign prestigious schools instead of creating better schools in our country, they cannot find solutions from within or lack the creativity to envision better solutions. Exporting your brightest to other countries is most short sighted idea you can imagine, we should be doing everything to keep our educated people in our country by providing them with jobs and a space for creativity

That's what f#%ked up Jubilee gets you! Na bado

Though it can work, the lasting solution would be to encourage corporations to use the labor locally by setting up manufacturing concerns in Kenya. This will have wider impact on the economy than sending workers abroad.
Lets say for example Addidas was to set up a plant in Kitui to employ 10,000 workers. The investors in housing will leap benefits and so will other businesses in town.

Hehehehe slaverly comes in different colours in usa/uk/west countries ur not beaten up or mistreated but racist words r used towards you,discriminations remains alive.Many kenyans works as house maids in usa in living iins,works at disability houses,as xmas cooking,cleaning n wiping clients behinds but the names is what has bin changed but the job is the same.But the biggest difference is in Arabs countries u work without taking a rest/racism is seen daily u don't have a life there.So jobs r the same but ur better off in the west as a maid or disability worker 1000x better of so my pples don't go to Arabs idiots racist country.But which ever country u go work hard n smart invest home n come back one day with what u have n enjoy better life n live without much worries??I forgot to state many kenyans r stuck in usa/uk juu they don't have papers,their children/parents/wives/husbands dies but they refuse to go home even after staying there for many many years making it sort of mental slavery juu watu hawanjipanga kurudi makwao juu they think they will die n yet in hii majuu having bin stuck for years u remain a slave big time.

I knew you had to go there. The problem as I see it is that the thieves in power siphon off so much money from legitimate development projects using bogus tenders that they artificially inflate unemployment especially for the young by having a huge chunk of the money go offshore. Hopeless and helpless, these young are then forced to seek employment in places in the middle east that are nothing more than trafficking mills. There are actual laws that protect even illegal aliens in the west(most are afraid to seek redress). Diaspora money can't fix the funding shortfalls. If you look at the money that was repatriated to Kenya but is still unaccounted for, you will realize this. Instead of asking us to invest in kaploti, why don't you focus your attention on the Kenya Kleptocracy and join people like Boniface Mwangi in real action? Or are you just a keyboard warrior, all talk and no action, or to use a language you might understand, kiguoya(mwoga)?

That 2nd video is a depressing and deflating view of what we do when no one is watching. In public many would proclaim their Christianity as precluding such deplorable behavior towards those with less than they have. We have such a long way to go. It is terrible that so many of us are so willing to exploit those less fortunate than us. You can do nothing or you can help.
https://support.oneworldchildrensfund.org/campaign/center-for-domestic-…