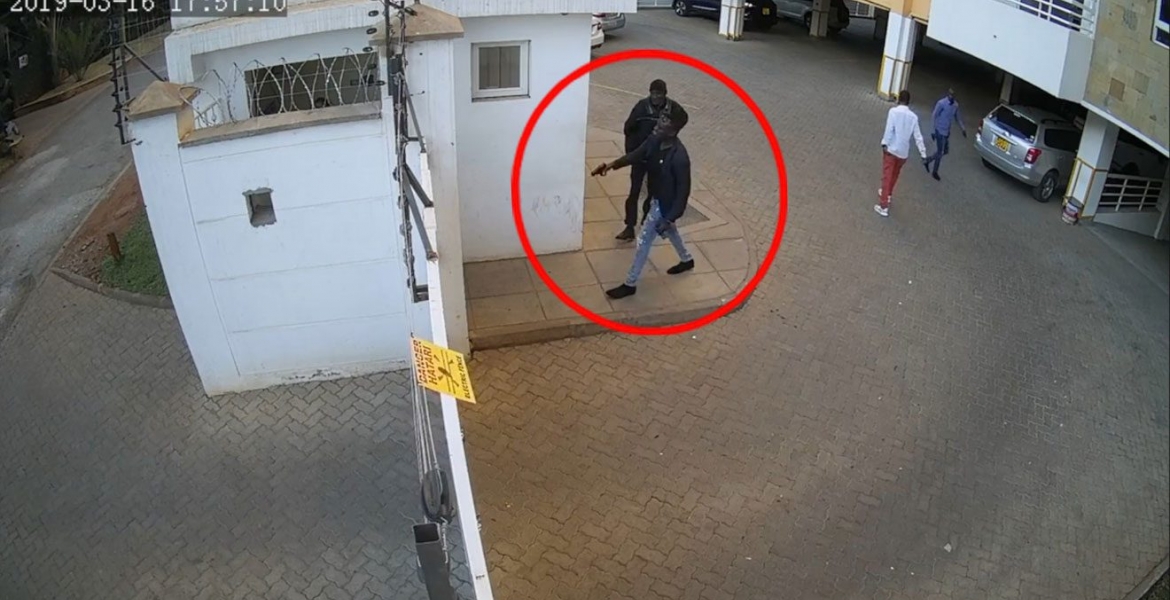 Police in Nairobi have launched a manhunt for a foreigner videotaped threatening to shoot a security guard in Kileleshwa.

In the video that has surfaced online, the foreigner is seen brandishing a gun at the guard after a disagreement over a parking spot.

The foreigner was part of a group that had visited an apartment block in Kileleshwa over the weekend.

The foreigner threatens the guard with a firearm after he refused to allow them park their vehicle, registration number KCH 001V at a spot reserved for tenants.

The guard says he asked the foreigners to park the car in an area set aside for visitors but they refused.

“They came and I showed them a parking spot for visitors but they refused and parked at a tenants’ spot. They said that they will not stay for long and they will be back in a few minutes,” says the guard as quoted by Nairobi News.

Confrontation ensues and one of the visitors brandishes a gun at the security guard.

“They said they will kill me and disappear because this is Kenya and no one can do anything to them,” says the guard, adding that they assaulted him.

The incident has been reported at Kileleshwa police station.

Security guards have a purpose and that must be respected. How do you threaten a security guard with a gun? This fool must be apprehended and sent to jail.

Those look like Nigerians...at least the one in blue. Uhuru said all Africans are welcome, that we have an open border policy. One would think Kenyans voted and agreed. Even Somalia and south Sudan which are immitations countries do not have open border policy.

Recently some chinese guys were stopped by police for not wearing seat belts. What did they do? They walked away and the policeman did nothing.

Those in power allow these behaviors by foreigners by not doing anything when they occur.

Wananchi should get together and do what the govt and police should be doing.

When you see a foreigner behaving as above, place him under citizens arrest and use necessary force. You can summon fellow wananchi to bring vibokos and mikwajos and use them accordingly.

I have to confess and God have mercy on me, if one of these fools accosts me and dares insult me, I will probably kill him.

Even black people are now looking down in Kenyans. What a shame. People all over the work see our meek president and think all Kenyans are meek like him.

Africa use to b one until the thuggish colonialist idiots started raping our continent n yes i agree we need to open our borders aslong as pple r traced,known where they are n follow the law of that land/nation so uhuru did the right thing.Look at europe the way it prospered after opening its borders????Trust me with matiangi in the office this idiots r done.Hii sio the west where they r arrested n roam free.The idiots will b caught.

Seems at least from what the gangster said, that Kenya has turned to be a place anyone can do whatever they want and no consequences. Someone, anyone please act fast to prove these goons wrong about Kenya na iwe funzo kwa vinyangarika wengine ambao wanchezea nchi ya ugeni.

Arm these security men na mchezo itaisha, 2 with guns will send everyone away, they risk their jobs with rungus only?? Come on gava, arm them for the safety of their lives and lives of others

Kweli Uhuru has slept on the job.

Kenyan's need to use their camera's and upload those video's for all to see and recognise those proud, I'll mannered fools. Watch video's taken by Hebrew Israelites in the streets of America and the west, where they are exposing all types of lies and superiority claims.
Video tape your so called "Masters" , leaders, superiors, church leaders,police, and upload those video's. Expose our leaders who treat foreignors better than Kenyans. Let them prove what they claim by their actions.
Expose them and let the world judge.

When a president is meek and timid this happens. You all remember the Chinese boy boy who call him a monkey and was left on his own until KOT shamed him into action.