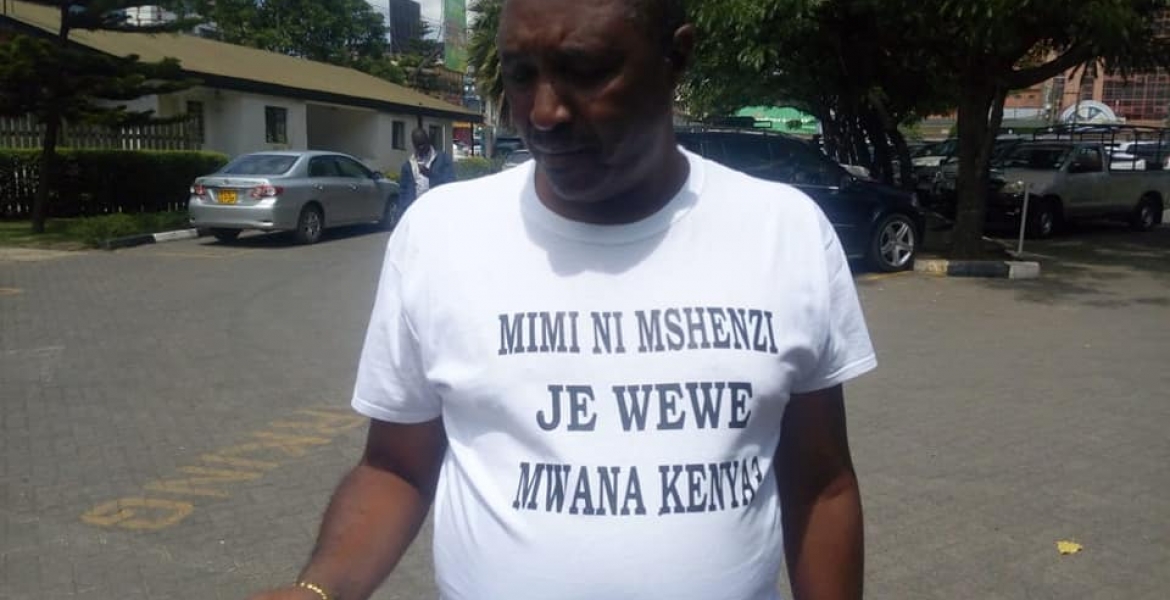 Police are looking for Bahati Member of Parliament Kimani Ngunjiri after he led protests in Nakuru town on Tuesday morning over President Kenyatta's "washenzi" remarks.

Njunjiri has gone into hiding after learning of his impending arrest by police in Nakuru town over allegations of incitement.

Nakuru County Police Commander Hassan Barua and area OCPD Samuel Obara have launched a manhunt for Ngunjiri, who escaped through Kokeb hotel’s back gate after addressing a group of youth.

In a press briefing on Sunday, Ngunjiri asked President Kenyatta to step down and call for fresh presidential elections if he was tired of leading the country. He also claimed that the Kikuyu community continues to suffer under President Kenyatta's watch.

Ngunjiri appeared to agree with Gatundu South MP Moses Kuria, who accused the President of neglecting his home turf while initiating development projects in other areas.

Speaking in Mombasa on Monday, President labeled Ngunjiri and Kuria as "washenzi", stating that his aim is to make sure every part of the country benefits from government's development agenda.

“I am not a person who is easily scared… Those going around playing petty politics I want to tell them this. We will not launch development projects based on which region a leader comes from. We want all 45 million Kenyans to benefit, we want all corners of this country to grow,” said Kenyatta during the commissioning of the Mama Ngina waterfront regeneration project.

Kimani Ngujiri si saying these projects lauched by William Ruto are not developments.

What happened to " Freedom of Speech". Before the government gets hold of Nginjiri in the name of incitement, we need to remember the same name " Wachensi" is what the colonialists called Africans and said they were civilizing us while they maimed our forefathers, stole their land, killed them and criminalized them. It was not okay to be called "Wachenzi" then and it hurts even more when one of your family member calls you the same. Raila's illegal swearing in ended up being freedom of speech and not treason . Why is Ngunjiri's T-Shirt not freedom of speech?
God give Kenya leaders not politicians. God help Kenya!!

What is wrong with protesting? Are we back in nyayo era? Assuming Ngunjiri is in Rutos camp, he is trying to get Uhuru's attention because clearly if there was instability, Rift Valley would be the battle ground. Uhuru should have sought audience with the Rift Valley leaders not squash their concerns. Who even understands what the handshake was about? What is known is that Ruto is corrupt and should not be president.Uhuru if all your eggs are in one basket being carried by RAO, be ready for surprises.

Here is the lists of projects launched by William Ruto in 2018 alone...

Are these Fake projects??

You have got to be kidding. Name them.

You have every right to freedom of speech but you cannot yell "fire in a crowded theatre" This is a beneficiary of chaos and his pockets will not line up if people get along.

The only person who has reached the threshold synonymous with yelling fire 🔥 is Murathe. Why wasn't he called Mshenzi along with Kuria and Ngunjiri? Why has he not been arrested yet he is threatening mass walk out from Jubilee party? This has the potential to bring chaos. Kuria and Ngunjiri maybe Rutos spanner boys but still a leader should refrain from demeaning utterances.

Exactly! Murathe has not suffered any wrath coz he's extremely close to Uhuru and his utterances are in line with Uhuru's thought process! murathe is pretty much Uhuru's spokesperson.

I declare the whole saga and from both sides of the debate officially USHENZI MTUPU! Note: I did not call anyone mshenzi lakini vituko vyao niza kishenzi. What happened to men as we knew them...talk face to face, through respectiful mediums not these public shameful spectacles?!!

Anyone here who listens to Fort Hall School of Government? If you do, you now know that the line has been drawn. A line between Dynasties and Hasslers (Wachenzi)and this will be the deciding issue come 2022. No matter what the Dynasties will try to lie and use Kenyans again in their next campaign strategy to stay in power, Kenyans will not be caught in catch-22 situation. It's now clear Kenyattas & Odingas want to rule Kenya non-stop. Hawa ndio wenye nchi. We the rest we tow the line. The President had a better way of addressing the utterances of his closest Advisor & Uthamaki-Broker Mr. Murathe. Since it's Murathe who first opened the political can of worms. For example,the President would have clarified that County development projects are initiated by County elected Leaders through appropriate use and fairly distribution of local CDF, not the President. The role of County Leaders therefore is to invite the President to preside over completed projects as an goodwill achievement toward the Big4 agenda. But when President start insulting Leaders who are peoples representatives, those insults start to invoke painful memories of Wakoloni and Chama Moja(KANU)by-gone days! Like Mzee Moi said in reference to Late VP Saitoti,"Urafiki na Siasa, ni tofauti"

Waste of country resources. Africans have thin skins when truth is told and they will try to silence you in a hurry using police for their corrupt agenda. Somebody said we are shiiit holes, we protested but I guess their assessment,/ maugite ma theri but nitondu twi thin skinned and arrogant we thought ni kurumwo twarumagwo but our actions points that way no wonder how educated bookwise we are, we still illiterate in life.

Kihuu..that's deep. You mean "ushenzi" is inate in Africans? A similar comparison was made by the Russian leader citing Africa is a graveyard where we go to be buried when we have enriched the rest of the world! That made me sit up, lakini ukweli pains as that assessment stung with reality. I had no evidence to dispel it!

Let the Ngunjiris be. The government should not be seen to play politics of intimidation and public bullying of those who do not agree from within. A house divided against itself cannot stand. The kyk nation leadership needs to put their house in order. May the true kyk leaders step forward and be counted at a time of need. It is more than just about DP or handshake issues, there is more to the concerns of the common ngunjiris and kurias. Silencing your own party members is like "burning the furniture to heat the house".

The president is right. Mt Kenya and Rift Valley leaders should not think they are the only ones capable of leading Kenya. I think they are the ones Uhuru was referring to when he said washenzi, not the ordinary wananchi. Mshenzi Nginjiri, mshenzi Kuria and other washenzi should not use wananchi in their war with the president. How can Mshenzi Nginjiri starts a Shenzi movement and immediately the Shenzi goes into hiding?

He should be castrated.

Some kenyans are such losers. How does one agree to be paid to wear a tshirt that says they are mshenzi by a good for nothing MP.