Ugandan President Museveni Promotes His Son to the Rank of General 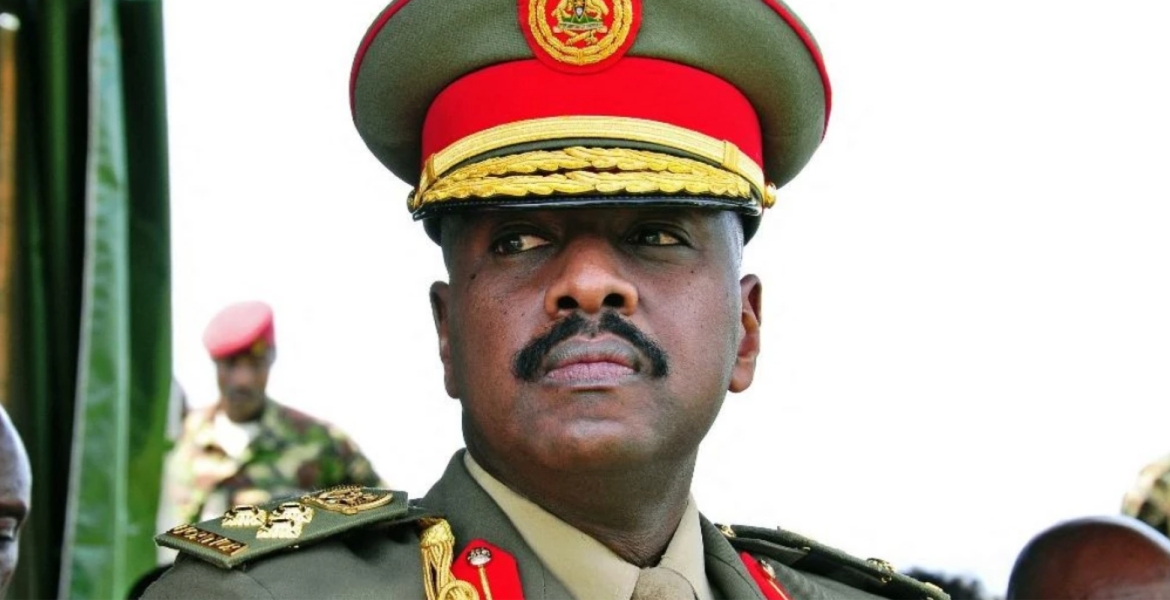 Ugandan President Yoweri Museveni on Tuesday promoted his son Muhoozi Kainerugaba to the rank of full General a day after he caused a storm on social media by claiming that his army would only take less than two weeks to capture Kenya’s capital Nairobi.

The Daily Monitor reports that despite his promotion Kainerugaba will stop serving as the commander of the land forces of the Uganda People's Defense Force and will be replaced by Maj. General Kayanja Muhanga, who has been promoted to the rank of Lieutenant General.

Prior to his appointment, Muhanga served as the commander of Operation Shujaa, the war against Allied Democratic Front rebels in the Democratic Republic of Congo.

Kainerugaba, 48, will retain his position as Senior Presidential Advisor in charge of Special Operations. He had earlier hinted at the said military changes, noting that his tweets "scared" Kenyans.

“Had a good discussion with my great father this morning. Apparently, my tweets scared Kenyans too much? He will announce the changes. There is a special prayer I shall make for our army,” Kainerugaba tweeted on Tuesday.

He also withdrew his comments, saying he has no plans to invade Kenya after his father advised him against making such an ill move.

"I would never beat up the Kenyan army because my father told me never to attempt it! So our people in Kenya should relax!" he tweeted. "KOT, I forgive you all for the insults you have hurled against me. Please let's work together to make East Africa great!"

On Tuesday, Uganda’s Ministry of Foreign Affairs distanced itself from Kainerugaba’s comments, stating that the country treasures the existing strong ties with Kenya.

Ugandans should be embarrassed by this man and his entire family.They are still clinging onto power while other African countries have moved on and understand that being president for life is now no longer possible Unfortunately Uganda does not matter much to the West otherwise they would have toppled this banana republic government eons ago.How dare he threaten Kenya when his country has suffered several military coups despite having peaceful Kenya and Tanzania to accommodate their refugees.Idiots who continually suffer from mouth diarrhea need to be put down

Ugandans are in for a rough ride with this mini-Trump poised to inherit the presidency from his dictator father soon.
I'm sure if M7 becomes incapacitated, it will be a similar story to Chad with the Debbys.

He is promoting his manoki son. What a shame?

Muhoozi knows KDF are only capable of looting bottled water instead of fighting enemies.It’s better to reform your weak military than abusing that guy who seem to know much of your force than the few domo mavi Kenyans.

My Ugandan brothers and sisters should wake up and say to hell with Museveni ,sons,and goons.
There is no difference between him and UHURU. Spoon fed kids who think that the country belongs to them.

In 1985 Museveni was not happy and wanted Bahima and Ankole and southwest Uganda in army and launched a war against President Tito Okello(GEN).Paul Kagame was his Intelligence Officer and fought in the Uganda Liberation war from 1980-1986(https://medium.com/@david.himbara_27884/kagame-these-days-prefers-milit…)

Paul Kagame had been a refugee in Uganda since age 4 crossing into Rwanda and back severally as he prepared the RPF Liberation movement.

PRESIDENT DANIEL MOI OF KENYA CALLED FOR PEACE TALKS IN NAIROBI IN 1986 BETWEEN PRESIDENT TITO OKELLO(GEN) AND YOWERI MUSEVENI.TITO OKELLO WAS SUPPOSED TO STAY PRESIDENT AND YOWERI VICE FOR THE PEACE PROCESS TO PREVAIL.THE TALKS COLLAPSED(https://www.monitor.co.ug/uganda/special-reports/uganda-50/nairobi-peac…)

In 1979 Uganda Exiles Led by General Tito Okello and General Bazillio Okello supported by President Julius Nyerere of Tanzania and Oginga Odinga of Kenya moved from Mwanza through Lake Victoria and Launched a rebellion that Toppled Idi Amin.Museveni was then in his late 20s and fought alongside Tito Okello and Bazillio Okello.2 years later in 1981 VP Oginga supported a coup against MOI of Kenya by Airforce Soldiers led by Hezekiah Ochuka,Pancreas Oteyo,Fenwicks Chesoli,Ogidi Obwon,Walter Odira Ojode and others(https://khusoko.com/2017/08/11/corporal-fenwicks-chesoli-hanged-in-1986…)

Milton Obote was restored President.Museveni had been Defence Minister under Amin but they disagreed.
After 1981 Elections in Uganda Obote was back to power.Museveni disagreed and went to the Bush and started Luweero War.General Oyite Ojok one of the best trained Army Generals in Uganda History lost his life in a plane Crash on his way to Luweero.

In 1985 Museveni was not happy and wanted Bahima and Ankole and southwest Uganda in army and launched a war against President Tito Okello(GEN).Paul Kagame was his Intelligence Officer and fought in the Uganda Liberation war from 1980-1986(https://medium.com/@david.himbara_27884/kagame-these-days-prefers-milit…)

Paul Kagame had been a refugee in Uganda since age 4 crossing into Rwanda and back severally as he prepared the RPF Liberation movement.

PRESIDENT DANIEL MOI OF KENYA CALLED FOR PEACE TALKS IN NAIROBI IN 1986 BETWEEN PRESIDENT TITO OKELLO(GEN) AND YOWERI MUSEVENI.TITO OKELLO WAS SUPPOSED TO STAY PRESIDENT AND YOWERI VICE FOR THE PEACE PROCESS TO PREVAIL.THE TALKS COLLAPSED(https://www.monitor.co.ug/uganda/special-reports/uganda-50/nairobi-peac…)

Museveni Became president in 1986.Paul Kagame became his defence minister in Uganda and moved to the US FOR MILITARY TRAINING.In 1990 Fred Rwigema a tutsi like Kagame was head of RPF and had helped Museveni in the Bush.Rwigema was Killed in Battle against soldiers allied to Rwandan president at the time Juvenal Habyarimana.Paul Kagame came back and launched the Rwanda liberation war in 1994 with the help of Museveni after the killing of Habyarimana.Rwanda was at War.In 2000 he became President.

After Paul Kagame took over he together with Museveni Joined forces with Kabila together with Congolese Tutsi(Banyamulenge) and Laurent Kabila took power from Mobutu.

YOWERI MUSEVENI UNDERSTANDS THE GEO-ENVIRONMENT OF THE REGION AND MOI NEVER TRUSTED HIM AFTER THE COLLAPSE OF THE PEACE TALKS BECAUSE OF ALWAYS VIEWING THINGS FROM A MILITARY ANGLE.Moi managed to contain Museveni hence no Migingo during Moi Time.Only Joseph Kony understands Museveni Language.The bush.

What kind of indiscipline is this for a uniformed officer to make such dubious, stupid and arrogant allegations against another independent country unprovoked. How can he just be left without any disciplinary action and as a leader what will the Junior officers think of him. He intends to succeed his father as the president of Uganda one of these fine days, will he be making such Trumposisus remarks on camera and expect to get away with them? I hope my Kenyan president and the Kenyan community at large will keep an eye on this man and his moves now and later. He is no friend and he should not be courted as a friend now and in future.