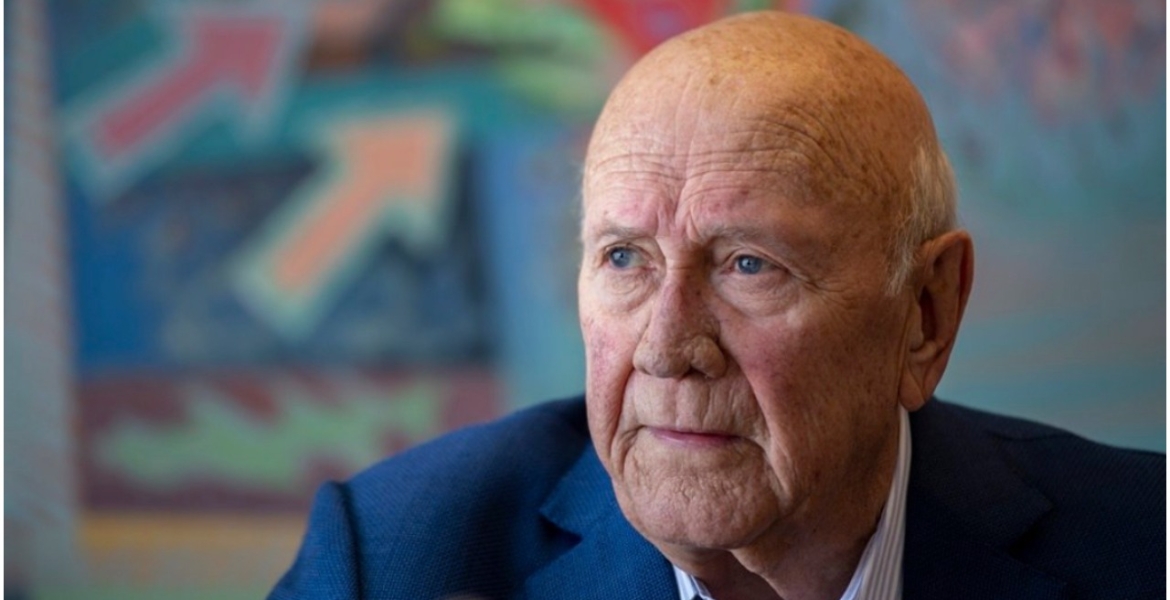 De Klerk passed away on Thursday morning at his home in Cape Town following a long battle with mesothelioma cancer. The FW de Klerk Foundation announced the 85-year-old’s death through a statement, saying he died peacefully.

The foundation had earlier this year announced that de Klerk was diagnosed with mesothelioma cancer, which develops when asbestos fibers are inhaled or ingested and causes scarring and inflammation of the lining of the lungs, abdomen or heart.

De Klerk, who was born in Johannesburg, served as seventh President of South Africa from 1989 to 1994, having taken over the leadership of the National Party in February 1989 from Pieter Willem Botha.

De Klerk and South Africa’s first Black President Nelson Mandela shared the Nobel Peace Prize in 1993 for leading the “miracle” transition from the minority-white rule in the country.

Brother Fredrick Willem de Klerk will be missed by many people not only back home in South Africa, but all over the world. Why? He had empathy, humanity, and a conscience built in him.

This is a rare quality among human beings because millions of people around the world lack these special human qualities.

De Clerk gently Relinquished (for Mandela) the Whites' grip on Power. Or else ...... Another Bloodbath was Waiting👹to Happen in South Africa.

Go rot in hell mr.This are the guys who supported apartheid to the core.They came invaded South Africa killed the owners of the land blacks south Africans did very bad things which icc refused to jail all this white thugs n u want us to remember the idiot??Hell no.He belongs to hell straight to HELL PERIOD

Mkenya halls I think you don't know the History of South Africa very well. FYI: If it wasn't for De Clerk's works Behind and in Front of the Scenes, Nelson MANDELA 1. Would never have been Released 2. Nelson MANDELA would never have become President of South Africa 3. And last but not Least: People like Julius MALEMA and the Rest would not be Freely Running their Mouth like they do right now.

This guy has a dark past that has so much blood. People need to just dig a little bit and see who he was and what he did before he became president..Boom!

Hell or heaven is designed for the people lacking "Critical Thinking Skills." In short, heaven and hell is built on superstition. Why? It is a myth used by European colonialists, thieves, murderers, rapists, and land grabbers for the purpose of appeasing those whose land had been taken away from by them.

Heaven and hell does not exist.

Imara Daima 'we wacha zako' bana. Heaven and hell do exist. It's just a Matter of Time when you'll Learn that the 2 Exist.

@Imara, hahahaha, you deserve a Mwakilishi Nobel prize for never failing to teach when the moment arises. For that I say Thank you my brother!

People do not give up power willingly. De Klerk was a diehard white supremacist but a wise politician. He gave in to pressure from the US government after the same government was pressured by the Congressional Black Caucus to support political emancipation for the South African black masses. When multinational corporations threatened to leave S. Africa, De Klerk knew the writing was on the wall and he reluctantly gave in. Stop praising a white supremacist!!!

Bobby - wewe ndiye umesoma real historia. I say like Mhalisi, De Klerk can rot in hell, that evil kaburu. If it weren't for external pressure, SA would still be colonized. He never gave up power or released Mandela willingly either!

If the Boer was truly altruistic as to give up power for the common good of the black majority with coercion by the world major super powers on his volition I would give him a lot of credit. On the contrary he ceded to pressure from within and without SA. Nonetheless he seemed less stoic as opposed to Pieter Botha who was quite egregious as he vehemently opposed majority black rule.

All in all, he helped South Africa transition with minimal blood bath. Now see what out brothers are doing in South Africa. It is a pity and most likely the likes of Misters Nelson Mandela, Walter Sisulu, Senior Mbeki and company are turning in their graves! Why cant we fix and take care of our own?

PHASE TWO – PARTITION OF AFRICA:
From November 15, 1884, to February 26, 1885, 14 European countries (including USA) met in Berlin, Germany to complete Phase Two of stealing and occupying other people’s indigenous lands by using the "bible" and the "gun."
During PHASE ONE, the European powerful and aggressive nations (Dutch, Danish, Russian, French, Spanish, Portuguese, English) stole and occupied Greenland, Indonesia, Australia, New Zealand, Canada, USA, Hawaii, Mexico, all Central and South American countries, including all the Islands in the Caribbean, Atlantic, and the Pacific.
PHASE TWO: Before this conference, 80% of African was free from European occupation except a few countries such as the Republic of South Africa, Mozambique, Angola, etc.
After the conference, the entire continent was raped by the same European countries that participated in stealing other indigenous lands during Phase One as I have pointed out above.
New European global land thieves joined this conference. The new Thieves were Italians, Germans, and the Belgian people.
November 15, every year, I always fast as a way of remembering the shock and the suffering my ancestors had to endure as they saw these "pink-skinned" thieves from Europe fully armed and carrying the Jewish religious book (bible) settle and occupy our ancestral lands.
The book that they carried promised the people of a better life ONLY after death. Meanwhile grabbing all the fertile lands and building permanent settlements for them and their offspring as they had done during Phase One.
Before the conference, they had sent spies disguised as explorers and spreaders of a new religion that is based on the late son of Mariam. Famous spies well known are characters such as David Livingstone, Mungo Park, Henry Morton Stanley, and many more European spies.
The religious terrorists (bible carriers) started immediately indoctrinating the people whose land had been stolen to forget everything African and take:
1. European names.
2. Language and feel ashamed of their ancestral languages
3. European culture
4. European religions.
The hackers did such a nice job because many contemporary Africans are still ashamed of their names, language, culture, and traditional religions.