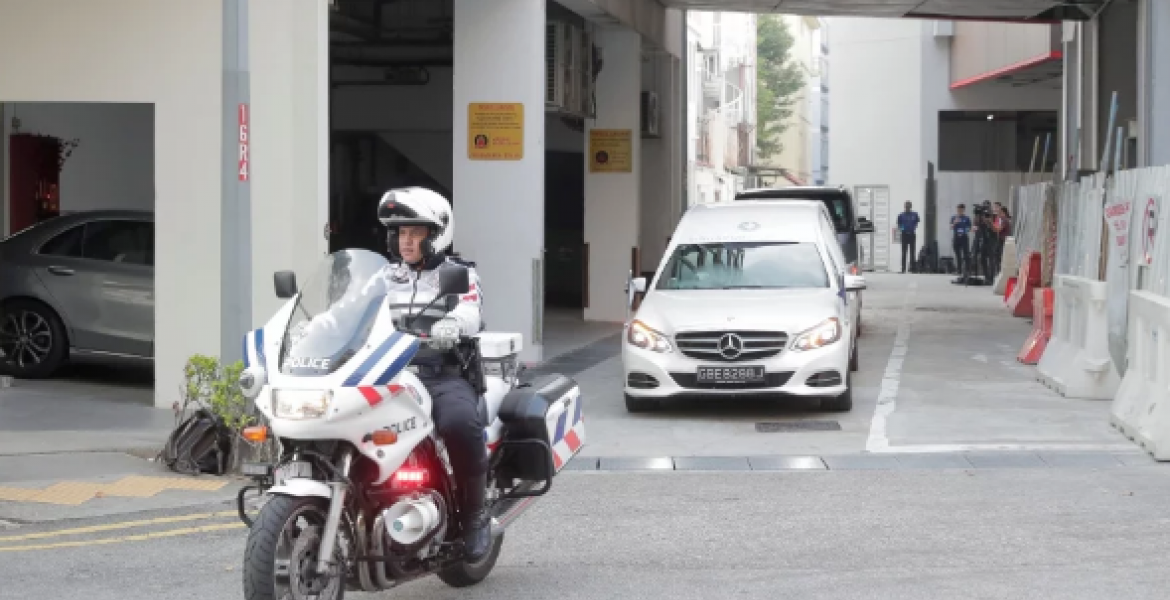 The body of former Zimbabwe president Robert Mugabe was airlifted from Singapore on Wednesday morning ahead of burial next weekend.

Police motorbikes were pictured escorting a white Mercedes hearse carrying Mugabe's remains from Singapore Casket, a funeral parlor where he had been preserved since his death.

A flight carrying his body and the visiting delegation left for Harare a few minutes later, his nephew Adam Molai told AFP.

A delegation comprising of Zimbabwe government officials and Mugabe’s family arrived in Singapore on Tuesday to attend a private Catholic mass for the deceased at the funeral parlor, which was presided by a Zimbabwean priest.

Mugabe's body is expected to arrive at Robert Gabriel Mugabe International Airport in Harare on Wednesday at 3 pm, said a family member. It will be received at the airport by President Emmerson Mnangagwa.

On Thursday and Friday, Mugabe's body will lie in state at 35,000-seater Rufaro Stadium in the capital so Zimbabweans can pay their respects, according to Al Jazeera.

The official funeral service will be held on Saturday at 60,000-seat National Sports Stadium in Harare and foreign dignitaries are expected to attend.

He will be laid to rest on Sunday but the location remains unclear. There are reports that the government plans to bury him at the National Heroes Acre, a hilltop shrine reserved exclusively for Zimbabwe’s ruling elite, but Mugabe’s family is resisting.

Mugabe, 95, died last Friday while undergoing medical care at a hospital in Singapore.

Putin said Africa serves no other purpose for african leaders other than as a cemetery. He was so right.

RIP.
For all that he did good for the Africans under painful and ugly colonial history, we are grateful. Our people need to understand that in his final days, President Mugabe bought his VIP escort from Singapore with Zimbabwe resources. How much of his country resources did he leave in Singapore in hospital bill's, accomodation, air fares and none of what he spent will ever help his citizens or even a single African in the future. While he got VIP escort for one individual, he left millions of his country men dying and suffering for lack of the same resources.
As Africans, we must praise our leaders for their real achievements and condemn them for their lack of vision.
May the Most High take care of business and curb the unseen slavery from our African leaders.
This proves Puttin's (Russia's President)words true, our leaders have made Africa a "graveyard"
They spend all their I'II acquired wealth overseas and their bodies are brought back to Africa only for burial.
We keep his family in our prayers. May his soul RIP

Uhuru, Raila, Ruto, Sonko, Joho, Kabogo, Obado et al. Lesson to you all is that you will NOT take it with you. Might as well make a difference and not take away resources entrusted to you.

If you are in Tanzania and really bogged down by the stress and torn and worn by the anxieties, then here is the best remedy for all this . Just get the company of all the dazzling and fancy escorts and get rid of all the stress and enjoy the pleasure of the world.