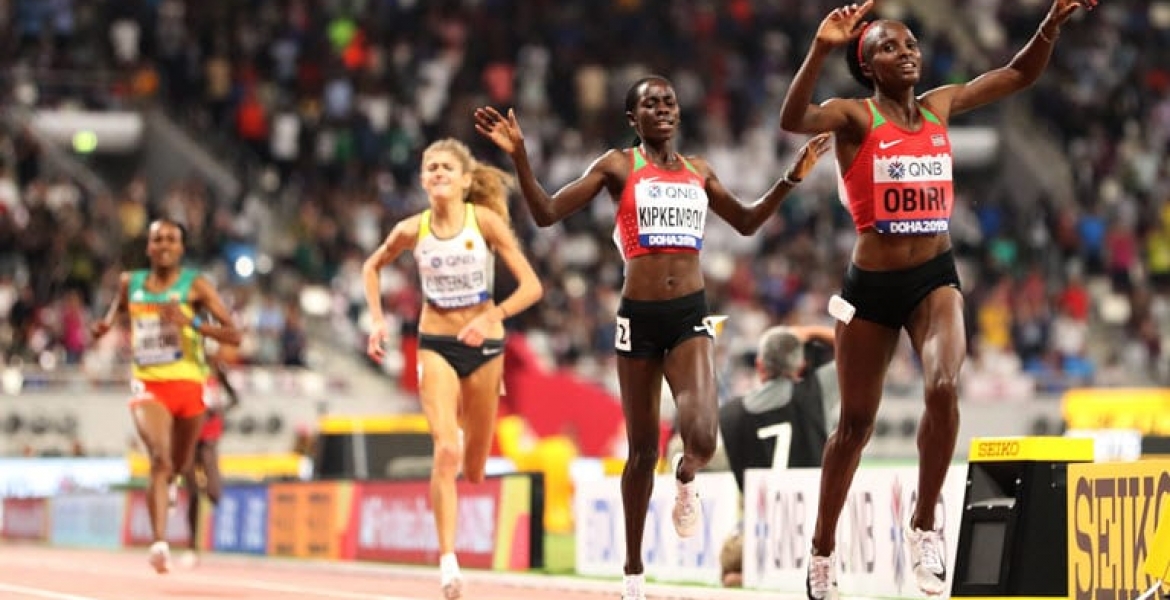 The 29-year-old led from the gun to tape as Kenyans on the terraces of Khalifa International Stadium cheered her every step to glory, touching the finish line in 14:26.7, a Championship Record.

Her compatriot Margaret Chelimo bagged Kenya’s first silver medal in the competition, coming second behind Obiri in 14:27.4, her personal best.

Obiri’s victory places Kenya in position two on the medal table with a total of nine medals, including four gold, two silver, and three bronze medals.

Kenya will be hoping to add to its medal tally on Sunday, the final day of the championship.

The United States currently tops the medal table with a total of 25 medals including 11 gold, 10 silver, and four bronzes.

Congratulations Team Kenya for a job well done. 5- Gold,2 -silver,and 4- bronze. Of course there is always room for improvement. noting that 3 world championships ago Kenya was atop the world.
Iam also glad that Kenyans in Quatar turned out in numbers to support their fellow country men,and women.Like Kipruto said, they motivated him...injecting a bust of energy to
overcome almost15 yards that was between him,and the Ethiopian who had just about counted gold in his bag.
Last week, we had bad news as another Kenyan marathoner doped.But Iam optimistic that non of our WC athletes in Doha will be found to have violated any anti doping rules.
Now the rest is to the Kenyan government to see that these great ambassadors are well taken care of.For year after year they deliver.
Of concern is the lack of medals in women's 800 meters,and men's 5000 meters.This is in addition to lack of depth in men's 3000meters SC.Thank God Kiruto had to dig deep in the final meters.This is an event that is known world over as a Kenyan event. We have to go back to Kemboi,brimin,and matelong days when Kenya was always assures at least 2 medals if not a clean sweep.
I have heard some fellows in the upper echelon of Kenya sports organizations lament that our best latent is skipping track for road races where there is money.Well if you are certain about this, then do something about it...My two cents.

Bravo our ###TeamKenya! You made us all proud!!!
Amazing performance.