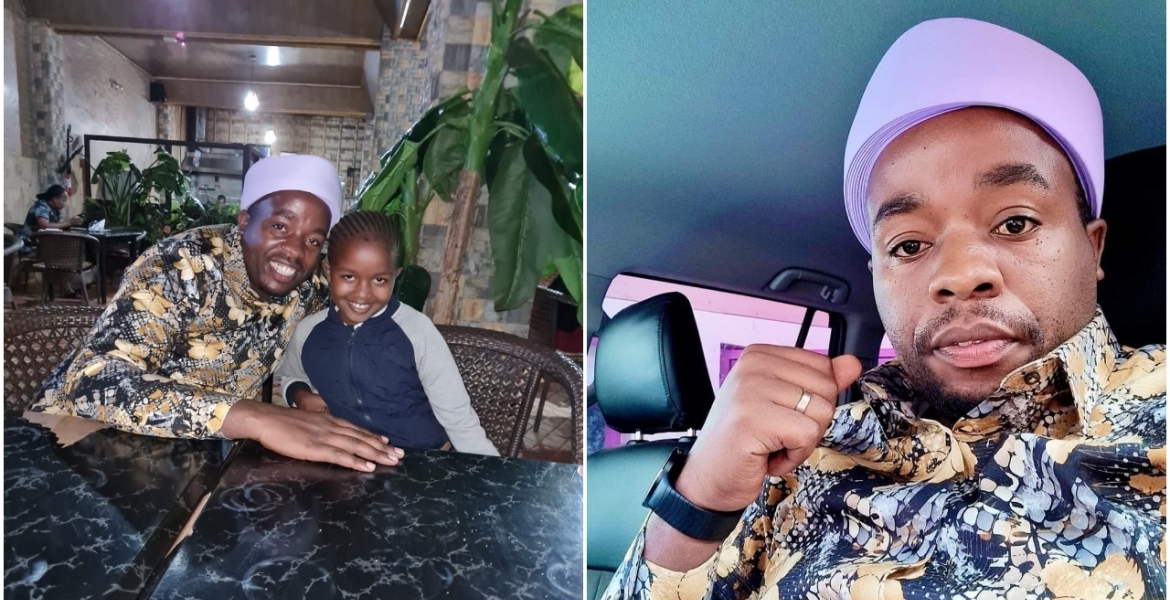 Popular Akurinu gospel singer Karangu Muraya has publicly admitted to siring a child out of wedlock.

Through his Facebook page, the musician shared a photo of his daughter named Shiru and wished her happy birthday.

Muraya, who is known for his charity work, went on to admit infidelity in his marriage and called upon other men with kids out of wedlock to take responsibility and show them love.

“Happy birthday my daughter Shiru, daddy loves you much. To my fellow men…if you were blessed with a kid out of wedlock like me accept and refuse to be a deadbeat dad,” he wrote.

He added: “Let’s take responsibility for them and show them love because one day they will also be a blessing to us. Live long my daughter.”

The singer’s post attracted more than 5,000 comments and 16,000 likes, with many lauding him for taking responsibility for his daughter. Among those who commented was his wife Triza Wamuraya, who wished the girl happy birthday, terming her as a blessing.

“Happy birthday girl…you are a blessing. Life must go on,” she wrote.

Muraya did not give details of the girl’s age and her mother.

Who hates a good feeling? Neither a nun nor a priest. They are all human just like anyone else. Taking care of the offspring if you produce one is the key.

Let's not pretend here. We cannot take the position that infidelity equals "blessings" when there is a love child.I would be very surprised if the intent of many who have affairs is to have "blessed children".Are we to understand that children born out of wedlock are blessings,thus special? These children are no more special than any other children born in marriage...They need the same love and care from both parents...This is almost like condoning infidelity,by loosely throwing in reverent world like "blessing".
I dont commend him for taking responsibility for his actions.But I appreciate him realizing that he should do the fatherly thing...He is not doing anything special. He is supposed to take care of his children in or out of the wedlock .He should.No question about that.Why should he not. You play you pay.Its his child. I would commend him if he did something courageous ,like killing a would be rapist to protect his daughter...Now that's commendable.
Not sure if its genetic,or cultural,but if tables were turned,and the wife was bringing home alove child sired by the local pastor,the reaction would be the same. Women appear to be more tolerant that men in such matters...May be they are smarter.

All are wolves in sheep's clothing...

Call yourself anything but you are not mukorino. We only use white turbans fool. And look at you a disgrace .

Blessings my foot. Yes, that's an innocent child but you are attempting damage control! With quickly changing laws that will cost men dearly,we need to embrace vasectomies. After 100% conviction that I NEVER EVER want to be responsible for fathering another child, I queitly made an appointment to have a vasectomy three years ago. The peace of mind it gives me is so worth it. The possibility of slipping into a calculating slay queen's trap is not a risk I am willing to take. Yes, utamu ni ile ile in case you are curious hehehehe

Vasectomy? Just stick to your wife or girlfriend in a monogamous faithful relationship. What do you gain the ass you got and loved cannot provide? Furthermore the ass you know is safer than the one you admire.

Monogamy has NEVER never worked anywhere in the world. The key is to prevent the possibility of bringing an unwanted life into this world. If the clergy cannot zip it, what makes you think you have the wherewithal to resist?

Deut.23:1......."He who has been castrated by having his testicles crushed or his male organ cut off shall not enter the congregation of the LORD.

Kenya, let's chat about the use of Bible verses when you have abided by the following

....and there is more where that came from.

Also, can you please explain why the story of Noah's flood is not recorded anywhere in history other than the Bible? With 4000 years of written history, the Egyptians have no record of Israelites in their midst. Also, the Bible has no record of Pyramids, yet they were there during the years that the Israelites were supposedly there.

My friend, learn to question your sources and beliefs.

This days just know being a preacher or a priest or a religious singer is just a career like the way one is a nurse and another a housecleaner. These people are as human as it gets. In the same measure maybe we should also stop believing everything these people say….. because they are as human as it can be🤔. Sad but true

@ Mary, I have no issues with people taking to preaching as a career.Or becoming priests.Yes, they are human beings.Their humanity is not in question here. What is in question is their dedication to this respectable vocation. You have to abide by the requirements of that vocation to be taken seriously,or as a bona fide servant. As a preacher, you are not supposed to fornicate , steal, cheat,become greedy,selfish,unloving...etc. You are held at a higher moral,and ethical standard.So when you accept to do the work of God,look at the way His Son Jesus Christ lived for guidance.If you cannot abide by the rules and requirements,take your humanity to another career that condones "worldly" life style.What say you?

This is what happened when we the stupid black man follows the white man brainwashed bible.We stopped following our customs as africans or as a gikuyu where getting married to 1/2/3 wives have never bin bad.Mr karagu if u have free time n think deep u have done the right thing n no apologies.Just take care of yr daughter n talk to your wife to try understand the situation.If she decides to quit yr marriage so be it.Hii unjinga ya kufuata dini za uzungu with white Jesus as Africans need to end.

I'd say let him just be human and accept he get's no additional power from his beliefs, he is as weak as we are, he errors, and has admitted to his errors.

He whoever hasn't sinned, let them throw the first stone....
We have to understand that as human beings curiosity will be there, peer pressure and hormones changes.
Our religious leaders and parents will tell us one thing and do the opposite.

Absolutely the best thing to do. NOT just wishing a happy birthday but taking the whole responsibilities. You brought them to this beautiful World!