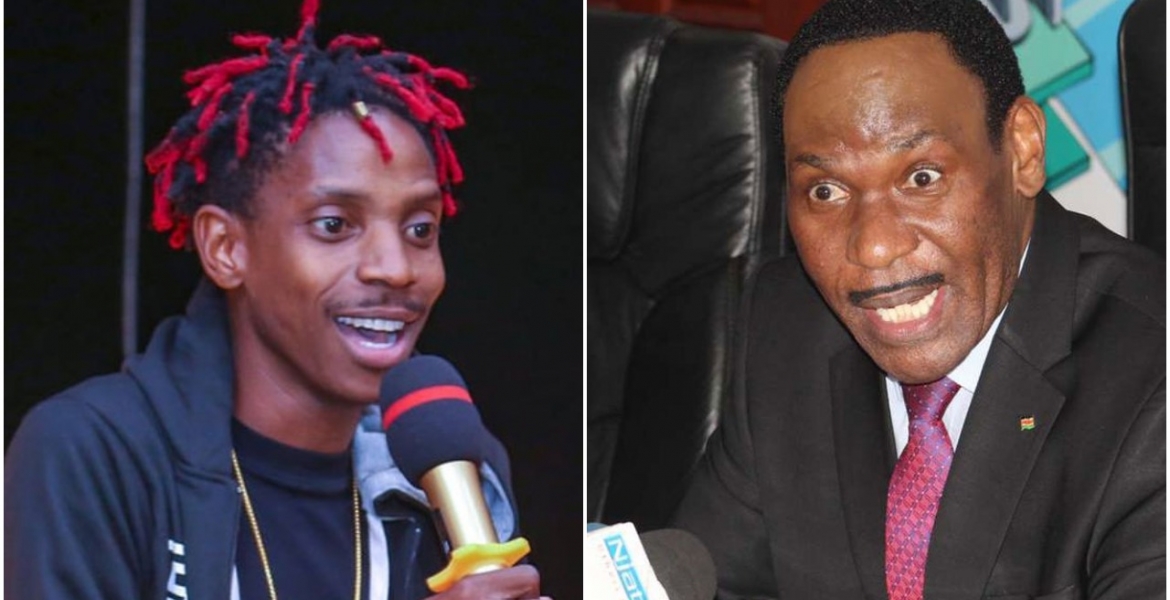 Comedian Eric Omondi has clapped back at Kenya Film Classification Board (KFCB) CEO Ezekiel Mutua over his remarks on unrated content.

Speaking during a media briefing on Wednesday, Mutua accused Omondi of posting adult content on his social media platforms without putting an age disclaimer.

“People like Eric Omondi, you wonder what kind of a madman is this. You are showing your face on videos in a way that is not appropriate and you are an adult, then call yourself king of comedy in Africa, then why don’t you respect yourself?” Mutua posed.

Mutua, who is referred to as the Kenyan ‘moral police’, was speaking in relation to the increased cases of school kids getting involved in immoral behaviors.

KFCB launched a national campaign to sensitize members of the public on the dangers of premature exposure of children to adult experiences.

In a rejoinder, Omondi accused Mutua of using his name for “cheap publicity stunts”, adding that he has never done anything to improve the Kenyan film industry.

“Dr. Ezekiel Mutua. This is your last warning. Stop using my name for these cheap publicity stunts. I have never understood exactly what you do for a living. You have not helped the Entertainment Industry in any way,” Omondi stated.

He further claimed that Mutua used public funds to fly to Mombasa to hold a press briefing and warned him against using his name again.

“Hiyo pesa ungenipatia niongeze nazo Cameras Kwa Studio zangu so that we shoot more videos for young talented Kenyans. Please Visit Eric Omondi Studios and see what we are about to do to help young and upcoming talents. Don’t ever address me or use my name again. You don’t know my story!!! You dont understand my process!!!” Omondi added.

'I have never understood exactly what you do for a living. You have not helped the Entertainment Industry in any way,”
I truly agree with this statement.

Eric omondi’s raw stuff on media should be properly rated and control to protect the children! One man can’t dish out bile to the entire county and people expect the nonsense not to affect the under age children! Mutua should put control measures to protect the kids!

Eric the mondo - you got more to lose fighting with Mutua, that what Mutua got to lose! Your new business might begin to nose dive very quickly if you don’t collect your acts! And yes, most folks don’t care for you rusty brand!

I once saw a video of Eric swimming nude in a river in Western Kenya. Such pornography is what Mutua is talking about

Eric Omondi is not a role model to our youth! He needs to understand what Mutua is talking about!