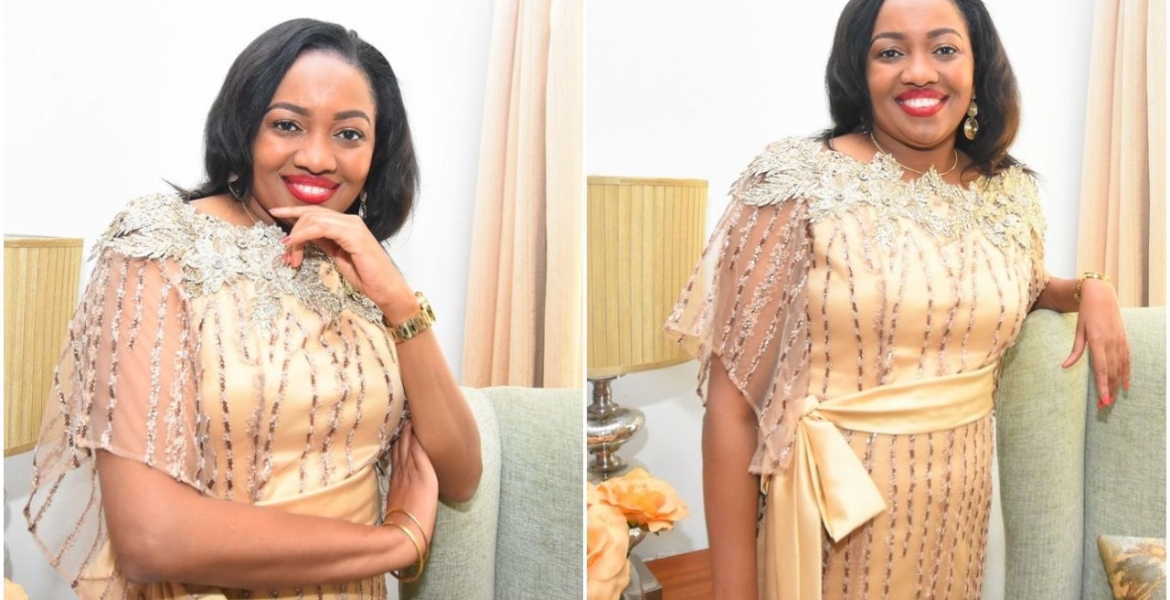 The two tied the knot in a beautiful traditional wedding ceremony held at Kihika parents’ ranch in Marmanet in Nyahururu, Laikipia County.

The bride was dressed in a gold-embroidered gown while the groom was in an African-themed white ensemble.

The Clarrisa Cortes gold raced designer dress worn by Kihika is estimated to be worth Sh1.2, according to a report by Daily Nation.

Given that both Kihika (46) and Mburu (36) are known to be multi-millionaires, the lavish gown is affordable to them.

Mburu, a close ally of Deputy President William Ruto, reportedly runs several businesses among them a clearing and forwarding company in Mombasa that also has a branch in China. He is said to have bankrolled Kihika’s campaign for her Nakuru senatorial bid in 2017.

On the other hand, Kihika hails from a wealthy family. She is the daughter of the late veteran politician Dickson Kihika Kimani—who was among the richest politicians during the Kanu era.

The two met during President Kenyatta’s campaign trail ahead of the March 4th, 2013 general election, months after Kihika returned to the country from the US, where she lived for 20 years.

Kihika is a mother of two, Tiffany, 22, and Ashley, 20. Mburu was previously married to Beatrice Wanjiku, a union that yielded two children.

Kwani she had eaten a full goat before the wedding

Of course most Kikuyu wedders do; or she is PG.

@gurst1 - you are very well trained on tribal bigotry! When are you going to realize Kenyans have increasingly learnt to appreciate the diversity we all cherish together as one nation!?

Your kind of attitude and behavior is all the reason why Kikuyus are very apprehensive about including you into the higher quality life they have build for themselves in every aspect of life!

You are still way down there on the base of the pole trying to mentally evolve!

We build this nation on good values @ guest1! Now when you start tearing down when we have so hard worked for to build last social bridges with bigotry, I start wondering if you are thinking about your small tribe that we can just let it down off! And yes, we also know how to revenge as you keep talking junk; you loud mouthed fool! And you can meza mate while we eat!!!

While I could care less to know your tribe @guest1, all I can tell you is to free you sick mind so you can allow yourself to see Kenya at it’s best!

The beauty of Kenya is in the diversity of all the 44 tribes which do everything possible to hold our country together!

My kikuyu friends do not need to be insult because of your in-born insecurities and callousness! It is important to speak out when a low level fella like you is trying to tear the fabric that hold us together.

You ought to be very ashamed of your short sightedness and your delayed development! Your ignorance is terribly amazing!

Your women have sinking eyes and inward looking bellies because you can’t afford to feed them @guest1. So leave our well fed women alone. We take care of our families!!!

Maheni wanjohi... That dress is not 1.2million, l can show you a $1000 dress and look way better than that. Even Ksh50k l doubt, susan is not that stupid to spend that kind of money on a dress.

So the Wtiter/Reporter is Stupid. Right?😓

Then buy one a post here for the world to see so you can prove your shitty point! This idiotic women in America my damn foot are quite childish and petty! How old are you woman?? 2 years old??

So ironic how all politicians are multimillionaires yet the people they represent are in such dire poverty. A politician will go in the game with a net worth so small but in a matter of a few years he or she ends a multimillionaire. Sh*t in need to get in the game. A 1.2 million for a gown. Spend half is that and donate the rest to your people.
One thing I appreciate about wealthy Americans is that they give back. They don’t hoard their money. Asking a wealthy Kenyan to give to charity is like asking him to give up his piece of steak to his dog.

KK, what is the rationale of stealing from people, then returning the loot to them? Look at the guest list at this wedding. They are all millionaires who cannot account how or where they got their wealth, because it is looted from public resources. But then again, Kenyans don't elect people unless they show a willingness and ability to loot public coffers. We condemn corruption in public, then vote for thieves in the privacy of the polling booth.

@Nomad thanks for responding to my comment. The average Kenyan doesn’t pay taxes so whatever monies these politicians steal is not directly tied to the people. But yes, it’s public funds meant to advance the country. We all know how they play the game, it’s not secret. To emphasize my earlier comment, I see no issue if she was to give half of what she spent on that dress. The money they loot was meant for the people anyway.

Everybody including the unborn is heavily taxed in Kenya.The Price hikes you hear on daily basis are taxation.The price of petrol was recently increased the same day it was decreased in US.You are taxed when buying food,medicine,fuel,clothes,electricity,house lent etc.Only a few elite thugs evade taxation.

Ati the average Kenyan pays no taxes? What do you mean?

This what it means to be a hustler in Kenya. Hawa politicians wanaenjoy wakenya sana.

Get over it @mary! The wedding is over for you to dwell in the past! Buy your wedding dress for a $1 million to undo Susan! Useless competition! Gee wees!

This lady was struggling in Texas, now see! But that dress for Kes. 1.2m, she should ask for a refund.

You live in the ghettos of Massachusetts but you already know Kihika who lived in Dallas, Texas!!!??? Stick to your cna job and stop spreading gossip about people you don’t even know.

You are all the reason(s) I worry about Uhuru supporting the Luos for the position of presidency in Kenya.

You have a certain edge of arrogance, foolishness coupled with laziness that I have not seen with any other group of people in Kenya!

Hii ni pesa ya hungry billionaire Kenyans who voted YES for useless senate but cannot tell it's functions.Right now the same wanjinga are waiting to pass for additional 100 women MPs whose only known duty is to satisfy their DUMES/NDEGWAS/NJAMBAS with sex menu and looting.

Seneca, how would a prosecutor be struggling? Ama she was loosing cases?

She was an assistant DA...public defender...for a short while. Public defenders don't make much; they also do very little for people they defend.

Stick to your $10.99 CNA job @seneca and stop worrying about other people’s salaries!

Why don’t you buy a Mercedes 500 AMG and go pack it next to your mud-thatched hut back in Migori?? A typical luo!

It is how much you make but how you can manage what you earn.

And for you information - Kimani Kihika estates is valued at Kshs 600,000,000; and Susan is a beneficially of that estate! How much estate did your father leave for you upon his death??

There was nothing to steal in the US. She just went to Kenya where she could steal, and joined the local gang of thieves.

The fruit does not fall far from the tree. You just have to go back and look where she came from and then who she associates herself with. Its in her bones, it is who she is.

Should I cry or should I say amen to what you have just said?? Birds of a feather always flock together! And yes, her boyfriend is DP Ruto and he has trained her on the law of stealing from our coffers!

There is a Kikuyu song that says. Kiratu kiu reke gikinye, nguo iyo niya mirioni... Mwakilishi might heard the song and thought it is true.

These fools call themselves hustlers while they are wasting money buying cheap kiteges for the wedding? It is very funny how Kenyans get conned and just take it. If she paid as much as she says, I must call her a stupid spender! That dress look like a ngunia!!

My wife one was 3.2m ksh n it never came on the news.So watu wanaongea juu ya 1.2m come on.N mine was made of plastics which r collected in our lakes.

Congratulations Susan on your big day. I think you look gorgeous and obviously have a beautiful smile!

Should you have spent around $10K on your wedding dress? That decision is solely yours.

Meanwhile, I'm checking my account to make sure it's positive because I just paid the water and electric bills and had forgotten there was mchango I had contributed to!

Congratulations Susan on your big day. I think you look gorgeous and obviously have a beautiful smile!

Should you have spent around $10K on your wedding dress? That decision is solely yours.

Meanwhile, I'm checking my account to make sure it's positive because I just paid the water and electric bills and had forgotten there was mchango I had contributed to!

Mwakilishi: The Clarrisa Cortes gold raced designer dress worn by Kihika is estimated to be worth Sh1.2, according to a report by Daily Nation.

Maury Povich: That is a lie!

Who is Clarrisa Cortes? If she's selling $10,000 you'd be able to find her online. Wedding dress designers that sell gowns that cost that much can be found online, like: Ines Di Santo, Viktor&Rolf, Pnina Tornai, Monique Lhuillier

I’m sure we can find a lot of faults with your tribe @guest1! But I chose to take the high ground and you personally roll down the cliff of bigotry!