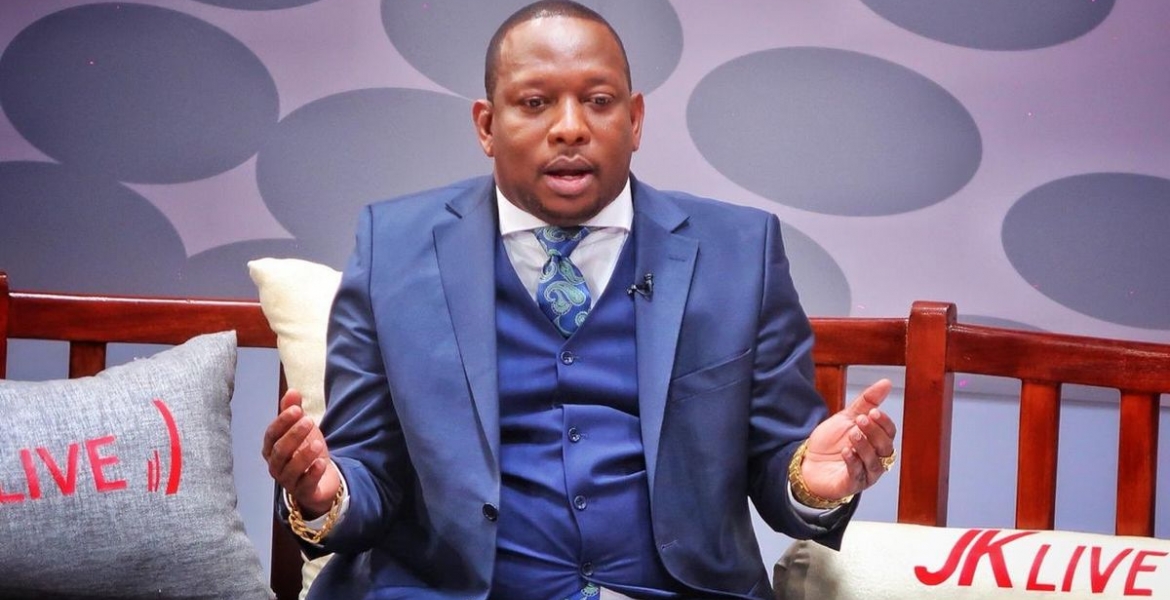 Nairobi Governor Mike Sonko has opened up about the source of his massive wealth.

Speaking during an interview with NTV, Sonko has dismissed claims that he acquired his fortune through unorthodox means, stating that his wealth is clean.

The flamboyant politician says his wealth is as a result of the wise investment decisions he made earlier on in life.

“I saved the little money I was getting. I have not killed anyone, I do not sell drugs…At some point, I came to Nairobi and I invested where my father was…. I own properties all the way from Lamu to Vanga. I have got over 1000 title deeds of properties which I own… I have over 200 logbooks of cars which I own,” he says.

“I am not rich, I am not poor but I am somehow wealthy and I thank God. I have been sharing whatever little I have with the people."

Sonko also claims that his wife was the first Kenyan to import double-decker buses into the country.

“My wife was the first proprietor in transport who imported double-decker buses post-colonial era," he notes.

Governor Sonko has also rubbished claims of siphoning taxpayers cash, noting that his net worth is more than Nairobi county's annual budget, which currently stands at Sh32 billion.

“I’m worth more than the annual budget of Nairobi and I’ve got some fixed deposit accounts about Sh500 million in different banks. I have built my wealth from way back even before when I became an MP," notes Sonko.

To prove his wealth, Sonko brandished a mountain of title deeds and car logbooks during the interview.

"I don’t have to announce where I get my profits from, if I buy a property at 10 million after 10 years I can sell that property at a profit because the value of profits appreciates every day,” he says.

He revealed how his Mombasa nightclub used to earn him Sh4 million every week.

Recently, a video surfaced on social media showing Sonko buying his wife a Sh4.3 million Versace chain at a jewelry store in Dubai.

UGH ( **wants to throw up**), that sums up my feeling for someone bragging about their wealth in a country where 90% are scrapping for food among many other basic needs

I want to throw up too. The Jubilee government that purports to fight corruption allows this rudimentary educated jerk to run Nairobi County as his personal property with no accountability. This thirty something year old retard dictator claim to own more than the budget of the County. Does he think everyone is as stupid as the people who elected him. Apparently he seem to have corrupted every institution one can think of including EACC. He almost seem to have the power of Trump

Sick, sick, sick. You are a sicko. Only in Kenya can a stupid man stand in front of struggling citizens to brag about his billions. Why and what make someone have that much guts. What a bunch of bullshit. Pride before the fall. This is too much for wananchi to take.

Hehehehe who said 90% of kenyans r poor n don't have food.Watu weusi wazungu we need to stop this crap or shallowthinking which has made pple like us who went n returned appear like fools juu we studied there n it's where some want to move to.Folks here asks us kwani diaspora especially usa hakuna mashule juu many of u mmejazwa na hatred na unjinga mingi mkirudi hapa yet mko na madegree namasters n phds yet yr understand is crap?? which makes me feel awkward n have to explain a lot that yes many of diaspora akili zimepungua but not all.

..same way am asking, kwani Mhalisi ulisomea wapi majuu and you comprehension is so so suspect? Oh, CNA you mean.. You only worked with manokis and in your small akili want to make your experience universal. You are so jealous of wanaDiaspora ...and we are sorry about your experience majuu and that you got deported..but it's not our fault.

But i agree sonko wealth is tainted with blood,drugs so not clean at all.Sonko if it's true ur worth 32b it's big shame ur not investing enough to the poor.Hii pesa yote ni bure especially if ur not touching the poor not only giving them food but starting projects which will reduce poverty levels which is not at 90% as wazungu weusi wa diaspora have quoted.

@Mhalisi, you abuse diasporians that they are essentially stupid then you go on to say Sonkos wealth has come from looting. Sounds like you are giving diasporians benefit of doubt afterall.
Wealthy people who have acquired their wealth LEGALLY tend to be wise. Wisdom is what Sonko and the rest of the thieves like arap Mashamba are lacking. They are no better that those goats you are grazing in Limuru.

1,000 title deeds for land he has grabbed since he became a governor.

Hehehehe @mugikuyu i haven't abused diaspora at all.All i have continued to do is educate them/u that they should stop negativity which they write or speak about their mother country most of the times which sucks wailea uzunguni.As u talk trash about yr mother it's good/positives to state loudly what they best have done to be fair.But the good thing is some of us who have lived in the so called majuu n have come back knows how this western countries are.Ziko na uzuri na ubaya wake but u guys always brainwashed that it's alll nyweeeeee or good compared with heaven.Bure kabisa

I think you meant "lived" as slaved in Majuu hence the resentments, some Kenyans were lucky that they didn't slave and from ivy league to wall street or equivalent, soooo, wacha kufikiria everyone actually slaved to be here. Me on behalf of the lucky lot who actually live and still afford to pump money in the economy, grow up , we dont need any lesson from you, hiyo tuu

Hubris at its highest.Unfortunately Uhuru cowardly dropped LIFE STYLE audit of his cabinet...to find out how they acquired there massive wealth...

Hubris at its highest.Unfortunately Uhuru cowardly dropped LIFE STYLE audit of his cabinet...to find out how they acquired their massive wealth...

Governor Sonko, read "How much land does a man need". Kenya cannot be saved by man-made religions or constitution's. We need God's law.
How do you brag to have such wealth, where some children cannot afford one good meal a day.