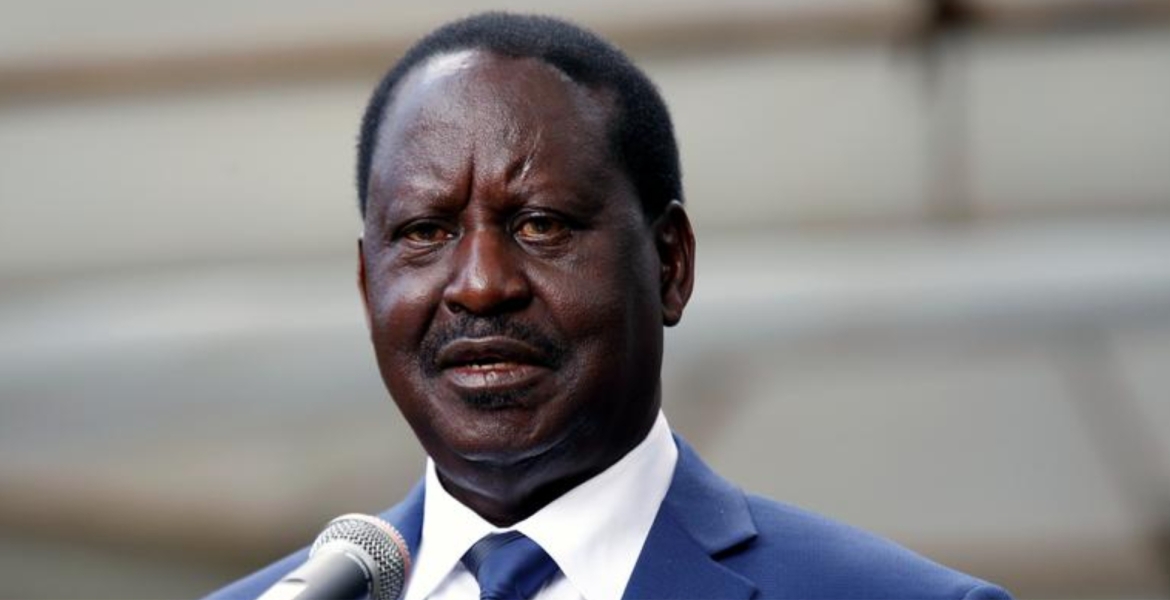 Opposition leader Raila Odinga has castigated President Ruto over what he termed as an attempt to reinstate the Nyayo regime under a different designation.

Odinga accused Ruto's administration of capturing institutions and inflicting injustice on members of the public, warning that this will severely affect the unity and stability of the country.

He cited the bid to remove the four Independent Electoral and Boundaries Commission (IEBC) commissioners who disowned the results of the August 9th presidential election, terming them opaque.

"The capture is now being attended to by the two houses of Parliament. Swiftly Kenyans are being turned into being passive by-standers in the affairs with grave implications for our unity, stability and governance as a nation," Odinga told the media on Thursday.

"Ruto's administration is taking us back to the affairs last witnessed in the last regime of the 1980s. We are here to sound a warning that no one should lie to this regime that we will sit back and watch a return of the Nyayo regime in another name."

Odinga, who unsuccessfully contested for the presidency in the August election, threatened to lead a pushback against Ruto and urged Parliament to be guarantors of the rule of law and not enablers of constitutional revenge against the four commissioners.

"The injustice being inflicted on the IEBC commissioners will mark the beginning of a massive pushback against Ruto and those who think like him. We will openly and robustly lead that pushback," he added.

"This probe is politically motivated and a continuation of the witch-hunt mission that Ruto is on. It will turn into a nasty partisan fight at a time we need to unify the country."

Odinga urged the four commissioners to boycott the summons by Parliament.

The peoples conman should shut the fack up!

The biggest Loser is Juju mother (f*cker); his Dad.

@juju, why shut up when democracy is being over thrown?, commisioners have a right to disown results and not questioned about it thats why it's called independence, this summons will inflict fears in future such that no one will stand for the truth fearing the consequences

It is okay to disown result with a reason. They didn’t have any reason as to why they disown the result and why wait until the last hour to disown it. The moment they walked out is the moment they resign their jobs. If you have issue you raise it immediately. But when you try to bring the country to blood tears then you deserve the jail time. Let the court handle it.

Dman, democracy is not about leaving your work place or going about insubordination. These Chereras didn’t explain to us where and how votes were stolen if at all there was any. All we heard was 101% which wasn’t explained. This initial 101% base of contention was not even a subject in Supreme Court. So let them face the grill.
And how come Raila is coming around again supporting iIEBC when he was on the forefront castigating them before elections?

@ Dman, we applaud people who stand for the truth but not corrupt unpatriotic hoodlums who can sell their people and democracy without shame. In 2017 one IEBC commissioner Rosalyn Akombe fled to the US in order to frustrate the Maraga court ordered repeat election. Raila quit the same election and used the Akombe excuse "the election could not be credible". About one hundred Kenyans died, schools in Kisumu were burnt down as Raila went around preaching "country will be ungovernable without him". Just like Akombe, these four idiots were bribed to pull out of IEBC to plunge country into chaos. The four should be squeezed until they tell Kenyans what they were doing running around at Bomas with Tuju at the middle night.

The old stinking no idea king of poverty violence will only b joined by brainwashed Luoz who remain behind uptoday leaking jaramogi family.The poor idiots will b shot by police n Life will go on when Raila is protected.

This is really funny though. Let's check.... pre-new constitution, there were 8 provinces. Of these 8 provinces, which of them have the highest number homelessness and squatters, several years later after independence??? Just curious! Your reasoning is no different from poor white fellows who think they are more wealthy than blacks because a few of the white folks hold immense wealth... Capitalism son. If you are wealthy, it does not necessary translate that your entire tribe is wealthy... many hungry and jobless Kenyans across the country irrespective of tribe... just saying..

Juju, Did he con your mama?? Politics is about life and death not a match between manchester united and chelsea. You shut the fck up and continue supporting the real conmen in power now! Choices have consequences, na bado!

Murathe, NO, your mama, remember when she was naked?

This BS must stop. RAO has caused a lot of pain to wananchi by instigating violence using his one dimension politics.....causing bloodshed...loss of life and property. Stop him.

@PPPian&@Kirathe should keep off @Juju’s parents from your petty arguments.Both might be cannibal Raila’s next meal.

Raila, wasn't the same state helping you win the elections?