Family Holds a Memorial Service for Charles Njonjo, Two Weeks After His Death 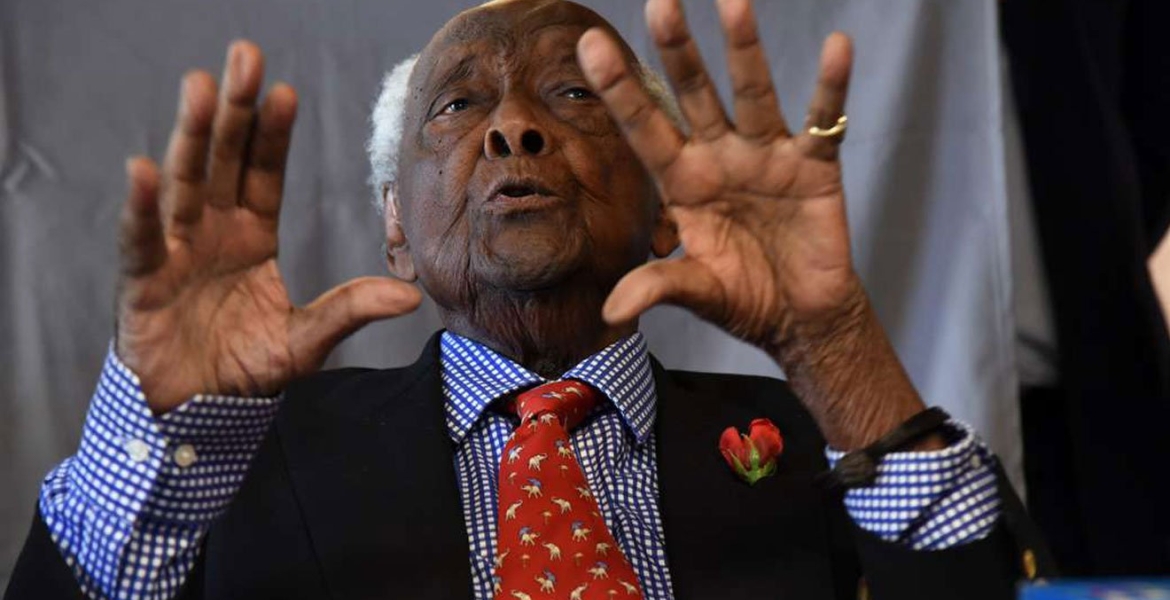 A memorial service for Kenya’s first post-independence Attorney-General Charles Njonjo was on Tuesday held at All Saints Cathedral in Nairobi.

President Kenyatta attended the ceremony that was conducted privately as per the wishes of the family.

Njonjo, 101, passed away on January 2nd and was cremated at Kariokor Crematorium a few hours later in line with his wishes.

In a eulogy read during the memorial service, the family described Njonjo, who was fondly referred to as the ‘Duke of Kabeteshire’, as loving and forgiving.

"Njonjo's fall from power when he resigned from his high profile civil service job became a subject of Presidential commission inquiry" that "perhaps the most important thing to remember about this inquiry, is how Charles was able to find forgiveness in his heart and build a new friendship with the then president which remained strong and productive. We his family and true friends know that his intentions were and will always remain in the service of God and Country," it read in part.

"Despite rigorous precautions Charles contracted Pneumonia towards the end of 2021. According to his wishes there was no returning to the hospital and no artificial prolonging of his life."

When you know how selfish, cruel, useless, loathful, takataka, murderer, inconsequential, etc, you exit through the doors of hell situated at Hell's Gate National Park, Naivasha. Imagine one individual, like Hitler, left so much damage to the whole world. Njonjo, like Adolf Hitler, was a master selfish egoes, a master of mysterious disappearances, a master of grabiosis, and a man who always thought about himself. All along, he knew well that Kenyans forgot about him even before 1975, when prominent Kenyans like Tom Mboya, Ronald Ngara and JM Kariuki were brutally murdered and their cases never to be resolved many decades later. May his soul continue to smoulder in everlasting firepot next to the devils paradise.

In the Black American culture, they believe that famous people always die in two. If this is true, I wonder which famous corrupt thieving politician is next. If I were given a choice ningesema awe yule mtu.

It's sad how we glorify MURDERERS once they are dead.
We should be asking ourselves how many people died because of NJONJO, How many were imprisoned? How many lost properties?
How many Widows and orphans were left behind?
How many people left KENYA for fear of being prosecuted when NJONJO was the AG?
We can sing all PRAISES to the DEVIL, but it doesn't make him an ANGEL.

@Small Frog & Co. never dared to address Mugane with his proper title(MUUAJI) when he was alive.Address wauaji Wanjiru,Obado,Raila,Joho,Kabogo,Ongili & Co drug dealers etc with their proper title now.It is a pity that many mourners are not honest when giving eulogies.

Comrade Menye,
Why do you think alot some of us ended up in Diaspora?
Please do your homework.

If you did not know him at personal level stop writing rubbish about him. This is a guy who jailed his nephew for stealing a radio. The sister begged him, he claimed if other Kenya suffer jail time for stealing so he has to suffer. Please, substantiate who he killed. Do you mean Njonjo or koinange.