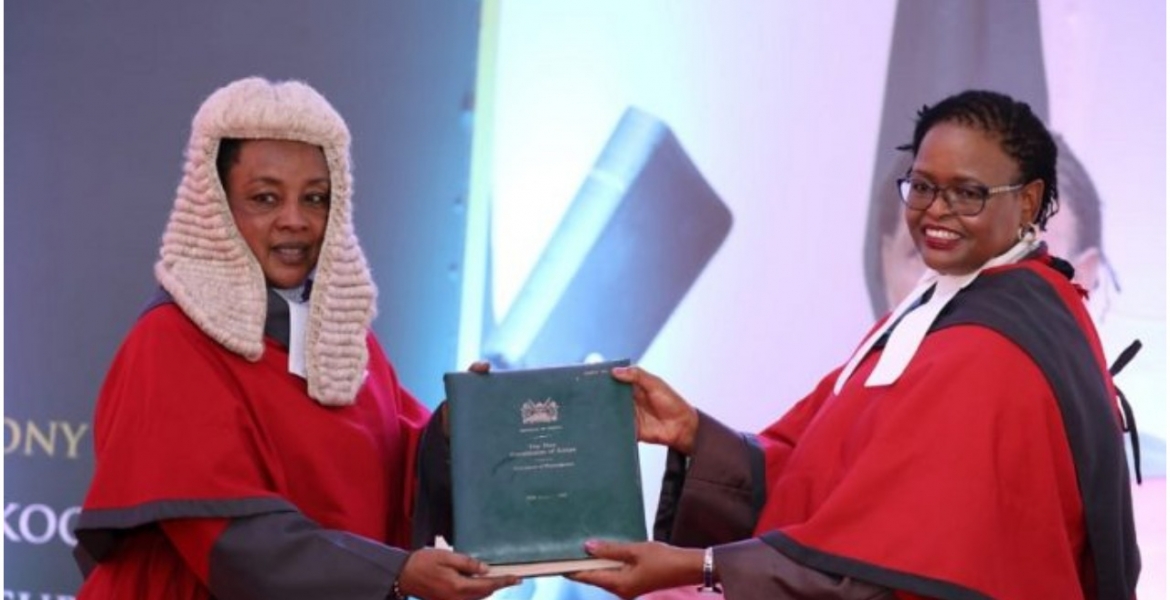 Acting Chief Justice Philomena Mwilu handed over Instruments of Power to Koome during an assumption of office ceremony held at the Supreme Court building on Monday.

Koome pledged to work closely with the other two arms of government and all stakeholders.

She also promised to ensure that no case remains in the corridors of justice for longer than three years.

“This is a target that is possible to achieve if we all embraced a case management system and the multi-door approaches that are now available to us such as the court users committees, court-annexed mediation, small claims court, and alternative justice system,” said Koome.

She added: “When everybody becomes an agent and champion for justice, I believe this country will start looking for our own indigenous solutions that lead to reconciliation and peace.  Moreover, many will avoid   violence, conflict, and other pitfalls or black spots that lead to endless court cases.”

Koome further pledged to embrace the use of technology, starting with the expansion of the e-filing service.

Koome, who was sworn in at State House on Friday, becomes the first woman to hold the Chief Justice post in Kenya’s history.

The 61-year-old was nominated to the position by the Judicial Service Commission (JSC), beating nine other candidates who were interviewed.

She has 33 years of experience in legal practice and previously served as a judge of the Appeals Court, where she headed the Criminal Division.

With an outstanding 33 years of experience she aiming for 3 years to conclude cases?
How long does a case take on average? How many judges and magistrates does she have under her? Delaying justice for three years is simply unacceptable and don't tell me it's better than six or eight years. Planning to take three years is not a good plan.
Add more men/women on the job!

Well u better keep yr word Woman Justice because we are watching.Don’t be petty n don’t take political sides like the Empty Maraga who wanted Kenya to burn for stupid ruling because his Man didn’t win elections.Today many of we the young people believes with Facts That Idiot maraga didn’t deserve the seat but juu he behaved like one of Jesus 12th disciples we trusted him but alituangusha.Big man crying for big cars Mercedes yet he forgot he went to serve the poor?The so church people should be behaving differently from our stupid leaders.Personally if the gavament don’t give me the car that I want to do my job I will take public transport juu am there to serve??bure kabisa with our leaders who r greedy.

Karambu would have started fighting corruption in judicially from the day she took judicial oath.She should have made hand over arrangements from another judge other than Mbete who is facing corruption charges.Oih Muka,forget corruption war.You cannot succeed as Uhuru is on the opposite side.Uhuru nae should appoint tribunals headed by foreign judges to investigate serving judges who were among the 41 recommended for higher appointments instead of condemning all of them,

Time to do something now. Waiting for the first directive from the office of the CJ.

Madam Koome,
All that you have said is good. What you have stated can easily be achieved if you first make the Kiswahili language available in court. You cannot administer equal justice when Wanjiku does not comprehend the colonial language. How can you administer equal justice if the language you use is foreign and has to be translated for one who is local to the land? That is where corruption starts.
If you intend to use indigenous methods, local courts need to use jury system and local languages for local cases. Those local cases need to be resolved according to local customs and not alienate the locals using colonial language.
The constitution itself need to be translated into local languages. How can anyone be expected to follow a law if they don't even understand what that law says or even the purpose of that law? Kenya is at crossroads and the stake holders are the Kenyans.
If we just follow the old system, it will lead to nowhere but just a new form of corruption. Doing the same thing expecting different results.
Time for change is now!!

She is just another political APPOINTEE.
The JUDICIAL system will never be free until we have a REVOLUTION...or Kenyans just WAKE UP...PERIOD.
3 YEARS IS WAY TOO MUCH.
GO BACK TO THE DRAWING BOARD.