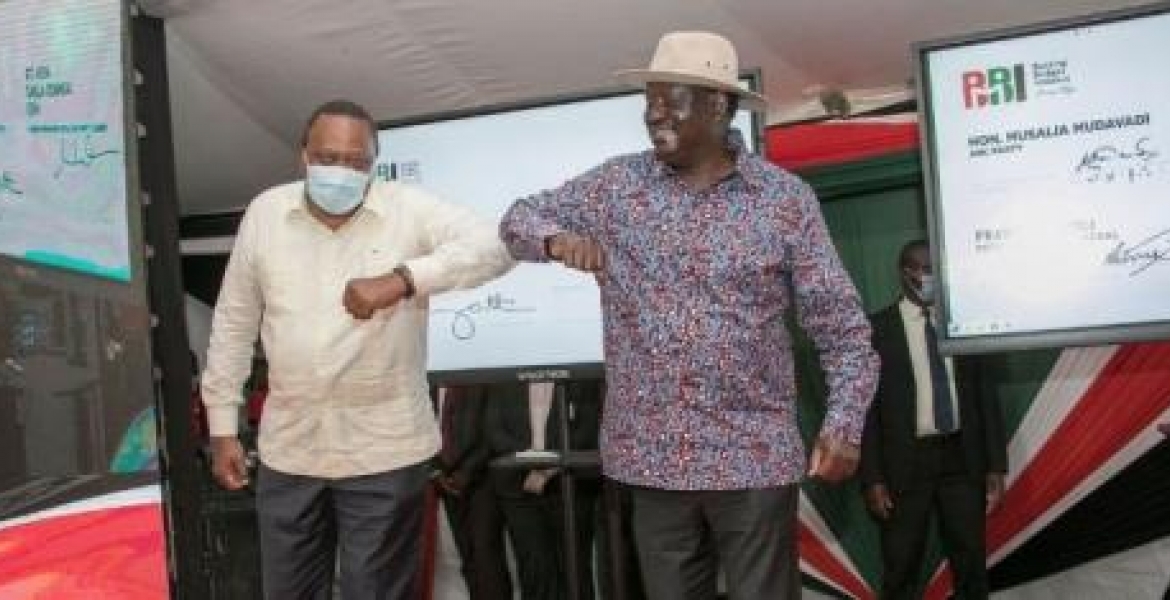 President Kenyatta and ODM leader Raila Odinga have formally launched the collection of signatures for the Building Bridges Initiative (BBI).

The exercise was launched during an event held at Kenyatta International Convention Centre (KICC) in Nairobi on Wednesday, marking the journey towards amending the 2010 Constitution.

“The nation is a product of continuous evolution; it is a product made, constantly, and purposively. The tree of the nation is watered with a constant stream of ideas.   Without this, the nation will wither and die.  The only thing that is static and does not change is that which is DEAD,” Kenyatta said during the launch.

He added: “We need to strengthen the 2010 constitution, we are not talking about replacing but amending the constitution, the first of many amendments that will come over a period of time.”

Kenyatta explained that the proposed amendments are aimed at addressing the challenges that have bedeviled the country for many years chief among them inclusivity and equitable distribution of resources.

“Because of the peace that has prevailed since the handshake, many Kenyans have forgotten what was happening at the time.  We were on the verge of divisiveness that would have deeply undermined our continued unity and peace.  There were even those reckless few who threatened the destruction of the nation; and actually, got a hearing from sections of the public that felt only drastic action could ease their frustrations.  So many countries, some that we share borders with, have trodden a similar path to destruction and ruin,” he observed.

He called on Kenyans to rally behind the process for a “prosperous and united Kenya for generations to come.”

On his part, Odinga said Kenya has opened a new chapter that will culminate in a national referendum.

BBI Secretariat’s joint secretaries Junet Mohamed and Dennis Waweru said the exercise will take a week before the signatures are presented to IEBC for verification. Kenyans can append their signatures online on www.bbisignatures.org.

“This will cater for those who will not be able to sign physically, you just need to log and sign and submit your details,” Junet said.

I have not seen the BBI report.But according to it's owners,Uhuru & Raila,the main aim is to create two centres of power one led by PM,the other by President and additional 70-100 women's plus more MPs seats as population dictates.This means more taxation to the already overtaxed Kenyans without any benefits.All the other reccomaditions means nothing if the government is to be expanded instead of downsizing it by half.I even thought financing of privately owned political parties will be removed from all Kenyans and returned to the members but Kenyans will continue paying shs 12m.per day to thugs Uhuru & Ruto and shs 10m.per day to savage Raila & Co.BBI still stands for BUILDING BILLIONAIRES INITIATIVEfullstop

I have seen it.

It’s just a job seeking document that wants to change Kenya into a dictatorship.

Moi left and so will Uhuru.

Then don’t comment on a BBI report you have neither seen or read! You show your stupid here for talking without facts! Shut up fool!!

Hands down one of Raila Odingas biggest achievement.

Are you not the Morris menye who traps motorists at corner Mbaya in Naivasha and kill them to steal their hard earned money?

Are you still talking here? You are a creature of the lowest form if you ask me! Go sell some matharu as you steal some coins from the old women in the market place!! Kubafu mafi ya Kuku wewe!!

The two old men have lost their mind. Turning Kenya into a dictatorship is increasing problems.

Moi left and Uhuru must go home. He’s forcing himself on the world.

Mtabaruka...sang..
By the BALLOT or the BULLET, by the BIBLE or the GUN....any which way freedom must COME...I hold this words true.
BBI or no BBI..redemption is coming.

pwagu na pwaguzi sarakasi itaisha lini? How can 2 guys decide the fit of over 50 million people.Even our learned friends are quiet. Why are we in a hurry to pass BBI what is in it for mwananchi except more taxes to pay the ceremonial PM and 2 deputies. we need to beef up out counties not the central government.