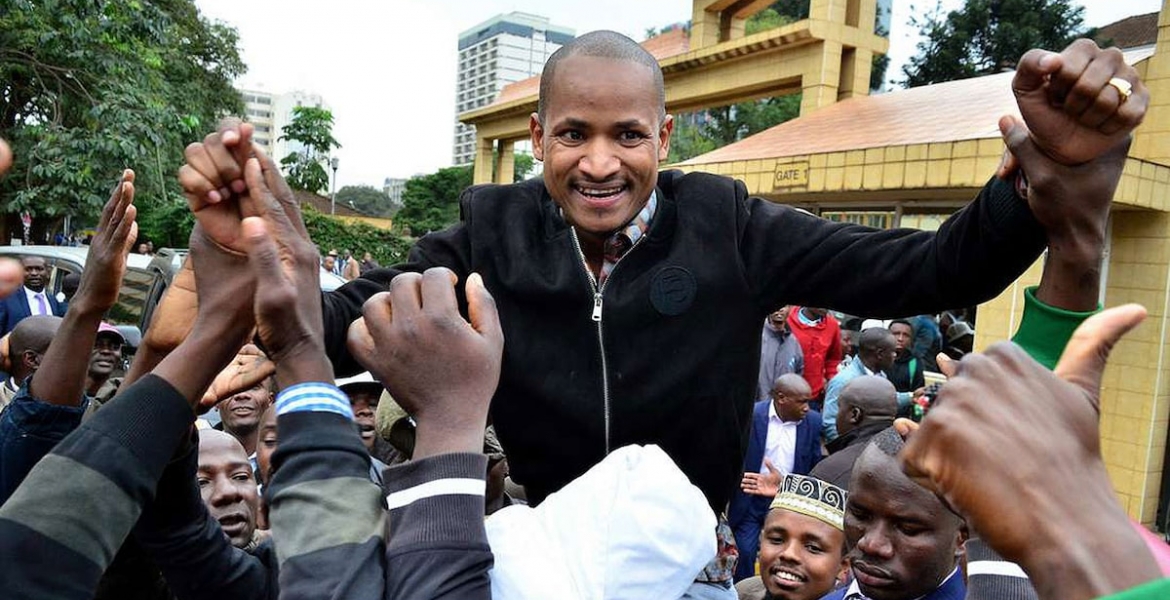 Owino, who is accused of shooting and wounding Felix Orinda, alias DJ Evolve, was allowed to leave the detention facility after depositing Sh2.5 million, the first installment of his cash bail.

Owino was on Monday granted a Sh10 million cash bail by Chief Magistrate Francis Andayi but was ordered to pay the amount in four installments of Sh2.5 million over the next four months.

The magistrate ruled that the money would be used to settle the victim’s hospital bill with the remaining amount serving as bail. Owino was also barred from consuming narcotics or alcohol in a public establishment.

On January 17th, Owino pleaded not guilty to charges of attempted murder and behaving disorderly while carrying a firearm and was locked for seven days pending the Monday’s bail ruling.

DJ Evolve, 25,  is currently admitted at the Critical Care Unit at The Nairobi Hospital after he underwent surgery last week.

A puke smile. After trying to kill somebody he come out smiling. Who foolish are these people celebrating with him as if he has done a good job?

What kind of world are we living in? It is sickening to see his stupid smile and these stupid people welcoming back their criminal hero. Sick!!!! The poor victim is still in Intensive Care Unit and he is already celebrating to be out there. Instead of a lowkey maneuver the criminal is welcome by some people who have no sympathy towards the victim. The judges have been paid off. The case will disappear like others involving money connected politicians. Corruption at its best. Wake up good people. I hope there are some good citizens left in the republic

this drug addict thinks this is cause for celebration? I hope they lock his ass up and toss the key. shenzi wewe

@babu - the picture above of Babu stupidity smiling with clenched fists is a clear negative indication of the feigned justice system in Kenya.

The masses uplifting a criminal MP sends a very bad message, mainly to the youth, that one can overcome justice for nearly killing an innocent man! And especially shooting a man at his place of work in the wee hours of the morning.

The crowd of enablers just look quite possessed by demonic powers! The idiotic crowd of cowards surrounding an alleged murderer? Very unreal!

Just take a minute and closely look at that clueless crowd of folks! These are just ordinary Kenyans supporting a thug, a gangster, a mindless murderer, and a bonafide crook!

What these folks portrays here makes you wonder if at all it is necessary to even fight for the ordinary Kenyans.

The 99% of Kenyans are part and parcel of all the problems bedeviling Kenya today! They glorify and celebrate evil not even knowing it will turn around to haunt them. The shooting Mheshimiwa will not hesitate to shoot one of them.

In very simple terms, Kenyans like those surrounding Babu are the enablers to those they elected. They enable them to do bad things.

It is just a continuous cycle of ignorance, poverty, disease, corruption, conspicuous theft of resources, and even murder!

God have mercy on them, for surely they do not know what they are doing!