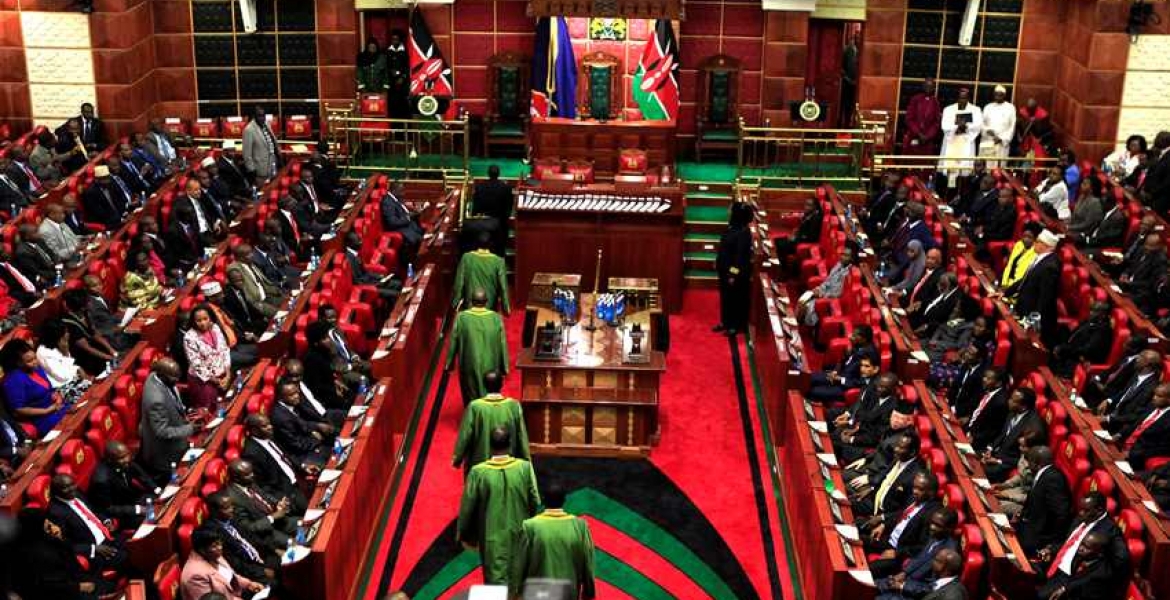 Members of Parliament on Thursday blocked debate on a petition touching on homosexuality.

This was after the National Assembly’s Committee on Justice and Legal Affairs (JLAC) asked for more time to deliberate on a petition seeking to have organizations funding the Kenyan gay community identified and barred from extending financial aid.

JLAC had already exhausted the legally allowed 60 days with the petition filed by nominated MP Jennifer Shamalla and was supposed to table its report to the National Assembly on Thursday.

JLAC Chairperson William Cheptumo requested the House to give his team additional time to finalize their report.

However, a majority of MPs rejected the plea, arguing that their religious orientations could not even allow them to debate on the ‘evil’ matter.

“I am a Christian, and cannot listen to this debate,” said Kikuyu MP Kimani Ichung’wa.

National Assembly Majority Leader and Garissa Township MP Aden Duale stated: “We were all sworn in using a Bible and the Quran. These things [homosexuality] are not [advocated for] in those books. We won’t sit here to discuss or even hear that debate.”

Minority Leader and Suba South MP John Mbadi noted: “We won’t entertain this thing [homosexuality debate] here. As an SDA and a Christian, I do not want to listen to those things. We can’t allow this House to extend and discuss satanic things.”

MPs affirmatively agreed not to debate the matter, resulting in the collapsing of Shamalla’s petition. In her petition, MP Shamalla argued that given gay-sex is outlawed in Kenya; it would be prudent to block organizations and individuals funding the LGBT community in the country.

@Mhalisi, did you say the kingdom of God? I thought you pray to Mwene Nyaga or have you recently converted and confirmed a kingdom actually exists?

Yup, it is evil indeed!!! Homosexuality is the white man's dirty past and present culture that the African unashamedly want to mimic.
Homosexuality is anti-nature and against God. Homosexuality is not part of Kenya or African culture it is rather a filthy borrowed culture from the west (,Robert Mugabe-UN Speech "We are not gays")
Before we ask our people to adopt this homosexual culture we must first understand the history of this evil,demonic and violent nature of this practice. Our own brothers who were carried as slaves were sodomized by their white masters in the "sex farms".
The process was known as "breaking the buck". It involves a strapping of negro slave who was defiant, beating him with a whip until he was bloody in front of his entire slave community. The master would then savagely sodomize the slave in front of his wife, family, friends and children so they can witness their father's sexual demise and humiliation. Buck breaking was the slave master's very effective tool to keep all young black slaves from ever being defiant and taking revenge. It also frightened the mother's and wives from ever giving consent to an uprising.
Buck breaking was so successful that it was made into a "sex farm" where the slave master could travel from plantation to plantation feeding their sadistic homosexual needs.
Ref: Slavery in the United States by John Simkin;
National humanities center resource toolbox on slaveholders;
Sexual Abuse of Slaves ;
Atlanta Black Star;
"Homosexuality and Slavery- The history of Black Homosexuality in America"
Sex Farms during slavery and the Effiminization of Black man

Mimicking and adopting other people's culture, without understanding the historic context and the negative impact and capacity to destroy our very own cultural and traditional beliefs, is a very dangerous road to take.

The MP should understand that many men say similar things about homosexuality like he did while they are closet gay. Others don't realize they are gay until they are jailed!

Interesting that suddenly MPigs are religious and cannot discus "evil".Doesnt the good book says its evil to be greedy...Is it not this week President Uhuru rejected their umpteenth request for more pay...
Seems like no week passes before some Mpig is dragged to court for child support.
In my opinions, the two afformentioned examples would disqualify anyone from trumpeting that they are a christian.
By the way one can debate about homosexuality on many fronts that do not involve sex.

@Maxiley you absolutely nailed it! These mpigs are just hypocrites and tomentors of the poor and for them to claim they are christians and referring to the bible while referring to gayism as a Western idea is comical indeed.

is corruption "evil" too?

Yes corruption is evil but homosexuality masheteni ushetani is more more eviliest.As i said wapelekwe wote united state of gormolla where u can marry dogs/squirrels n u can b what u have always wished to b.Bure kabisa

You Kenyan people need to learn of your own history. It would also be good if you used your brains when reading the Bible and actually try to understand the message of Jesus that is love to ALL. The Portuguese were among the first Europeans to explore the continent. They noted the range of gender relations in African societies and referred to the "unnatural damnation" of male-to-male sex in Congo. Andrew Battell, an English traveller in the 1590s, wrote this of the Imbangala of Angola: "They are beastly in their living, for they have men in women's apparel, whom they keep among their wives."

Transvestism occurred in many different places, including Madagascar and Ethiopia. Among the Pangwe people of present-day Cameroon and Gabon, homosexual intercourse was practised between males of all ages. It was believed to be a way to transmit wealth. The Nzima of Ghana had a tradition of adult men marrying each other, usually with an age difference of about 10 years. Similar to the pederasty of ancient Greece, Sudan's Zande tribe had a tradition of warriors marrying boys and paying a bride price, as they would for girl brides, to their parents. When the boy grew up, he too became a warrior and took a boy-wife.

Homosexuality is also recorded among the Siwa of Egypt. It was considered a boy's rite of passage in Benin, and woman-woman marriages involving a bride price existed in more than 30 African societies from Nigeria to Kenya to South Africa.

@David,
According to your argument, Africans should read the bible the correct way. The "Love" referred to in the bible is not emotions. Love of God is keeping his commandments.
According to your argument, homosexuality existed in African cultures. There is nothing that exists that does not have a name. Do more research, and give us what homosexuality was called in those cultures. Names and words in any language do not go anywhere, they can always be traced. Give us examples of specific languages and what homosexuality was called in those languages. Always support your arguments with real references and examples. This is information age where lies, emotions and propaganda are being exposed daily.
Homosexuality is against nature and against God.

@David, the white man's job in Africa was mainly to separate the black man from his God. He knew without that separation, he could not conquer the black man. Christianity and Islam are white man's religion whose only agenda was to change the black man so he no longer knows who he is (they renamed us using lies, renamed our towns, cities and mountains after themselves), stole land and resources, enslaved our people using their angelic power- THE GUN (their blessings). With the Bible on one hand and the gun on the other, they raped, sodomized, hanged, killed and did all manner of evil. Nothing can change the real history of the relationship between whites evil intensions and blacks over time all over the world.

@David, the white man's job in Africa was mainly to separate the black man from his God. He knew without that separation, he could not conquer the black man. Christianity and Islam are white man's religion whose only agenda was to change the black man so he no longer knows who he is (they renamed us using lies, renamed our towns, cities and mountains after themselves), stole land and resources, enslaved our people using their angel like power- THE GUN (their blessings). With the Bible on one hand and the gun on the other, they raped, sodomized, hanged, killed and did all manner of evil. Nothing can change the real history of the relationship between whites evil intensions and blacks over time all over the world.