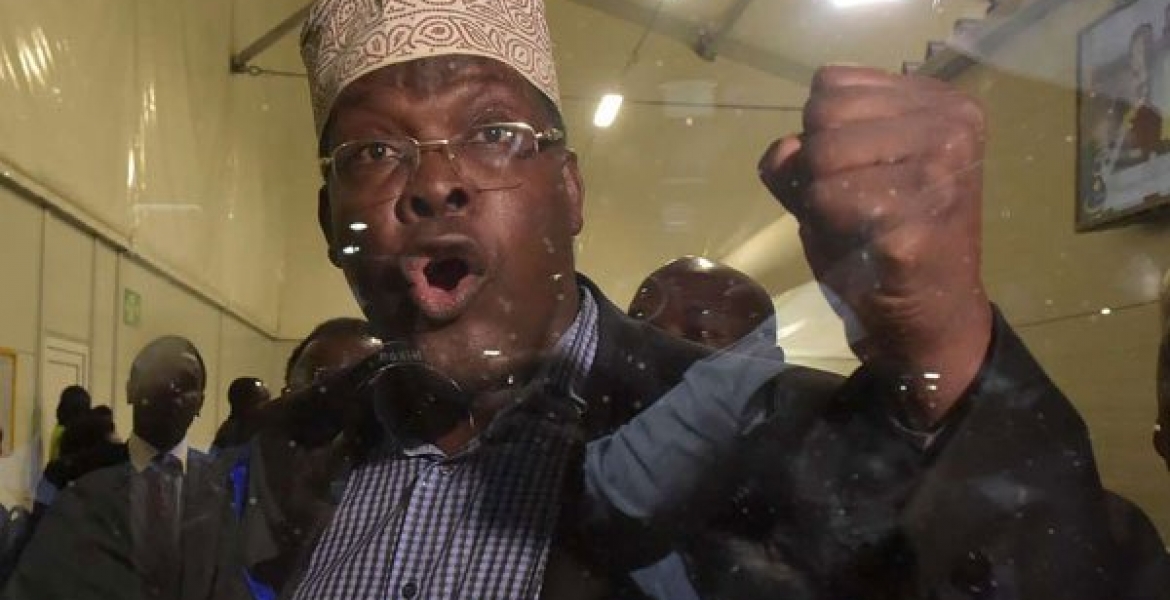 Miguna has reportedly ripped up application forms meant to regularize his Kenyan citizenship after Immigration authorities demanded he signs them.

Miguna, who is being detained at an undisclosed location within Jomo Kenyatta International Airport (JKIA) has insisted that he can't apply for citizenship because he is Kenyan by birth.

Acting Director of Immigration Services Joseph Munywoki had on Tuesday morning sent the application forms to the airport for him to fill them to have his citizenship restored.

Munywoki insisted that the firebrand lawyer lost his Kenyan citizenship in 1998 after acquiring a Canadian one, at a time when Kenyan Constitution didn't allow dual citizenship.

“To enable Miguna regularise his citizenship status, the Department of Immigration has dispatched the requisite application forms for Miguna to fill the process,” the statement read.

Miguna’s lawyers, led by Siaya Senator James Orengo, Otiende Amollo, Cliff Ombeta and Waikwa Wanyoike had not been allowed to access to their client by Tuesday afternoon.

Miguna said he wouldn't sign the documents, arguing that doing so would compromise the ongoing court case. His attorneys have also advised him against filling the forms since the High Court ruled he was a Kenyan citizen.

Gvt too little too late you have turnished your image on how you Manhandle your citizens..you can kill the messanger but the message is out there kila mtu anajionea..with different interpretations..tearing forcefully miguna suit at this age and erra..and you are expecting international flight to kick to JKIA With such police force and officers...the scene did not meet IATA Stds..Emmirates..your image and safety of passangers first Serikali you can do much better

I wouldn’t have put it any better!

Handcuff this Manoki and send him back to Canada with the next flight. If he misbehave tase him. Nobody is above the law. Follow the law Miguna and life will be easy for you

Why can't he call the Canadian embassy? They owe him as a citizen. This is contempt at the highest order. I say handcuff him and imprison him until proper travel documents can be acquired, then deport him. Even expatriates don't come back to Britain demanding this and that. They know and knew the score when they jumped boat.

Take him to the refugee camp in Mandera and he can stay there until he agrees to do what is right. The solution is simple; give Canadian passport, get a visa, and fight from within. Miguna is a stubborn MF.

Why is this Idiot in prison

Miguna must follow the law and the government should not bend for him. All of us in the diaspora who are dual citizens and became citizens of another country before 2010 had to fill those documents in order to get our Kenyan citizenship back. If Miguna refuses to sign those documents to get his Kenyan Citizenship back then he should be deported back to Canada.

Trying to look macho by fighting the rule of law to win the RAO disgruntled grumbles is low....chini sana!
Miguna, whom do you think you are? Mr. big staff? NO! And please, Immigration, stop treating this madman like a King....guthinjira ngoma...bringing him forms to fill...Let him do what is expected of every Kenya, fuata sheria.

Ati our laughable courts ruled that he's a Kenyan? If he'd given up his citizenship those days of no-dual status, he GAVE UP that right. These courts are the ones causing chaos and mayhem.

SOMEONE PLEASE SAVE KENYA FROM ITS OWN JUDICIAL SYSTEM, pleeeease! They cause conflict live!!!!

I have to agree with you, the court should be well versed about the law and the constitution, miguna is being just a pain to the government, he should sign those papers or be shipped back to canada in hand curfs.

Our Judiciary has turned Kenya into a laughing stock. They have bankrupted the country by repeating unnecessary elections, they create drama in the airport. Somebody please sack these Judges. You can surely catch them when they are being bribed or better still assess their worth. I am sure you will find they own properties they have not worked for. Anything to let them go and stop ruining our country. Ati bring him forms? Will they do that to every Kenyan? Mating'i, these immigration officers need handcuffs. Why did they not handcuff this giant of a man and throw him in a cell then deport him quietly. We didnt need all that drama. They need training.

Those of us who became dual citizens before 2010 when Kenya passed the same into law, had to pay $50 visa fee each time we came in and extend stay if in the country for longer than 90 days. I had similar arguments as Miguna even showed my Kenyan ID to prove I was citizen by birth. To legalize my citizenship, I completed an application with a declaration and paid Ksh. 5,500, and waited for months before the process was completed. Then paid an additional Ksh. 4,500 to get a Kenyan passport now that I had regained my citizenship. Is Miguna getting his for free? if so, those of us who paid for the process should get a refund. In US & Canada, he would have behaved himself. In Kenya, Miguna who claims to be an immigration lawyer has support from those who do not love their country. Teach the bully to abide by the law by following the law- from the courts to the slums.

Well Said @Immigration Lawyer. If they let Miguna in without reapplying his Kenyan Citizenship that will be the new rule/law/norm that everybody else will follow. People will be quoting Miguna got back his citizenship without reapplying. Those who have already filled those form should get a refund and paid the time spent filling those forms. Five hours times $30 per hour. We want our money back GoK. People will file a class suit to get their money back