Jubilee Government Was Formed in This House: Jimmy Wanjigi Speaks after Police Raid On His Home 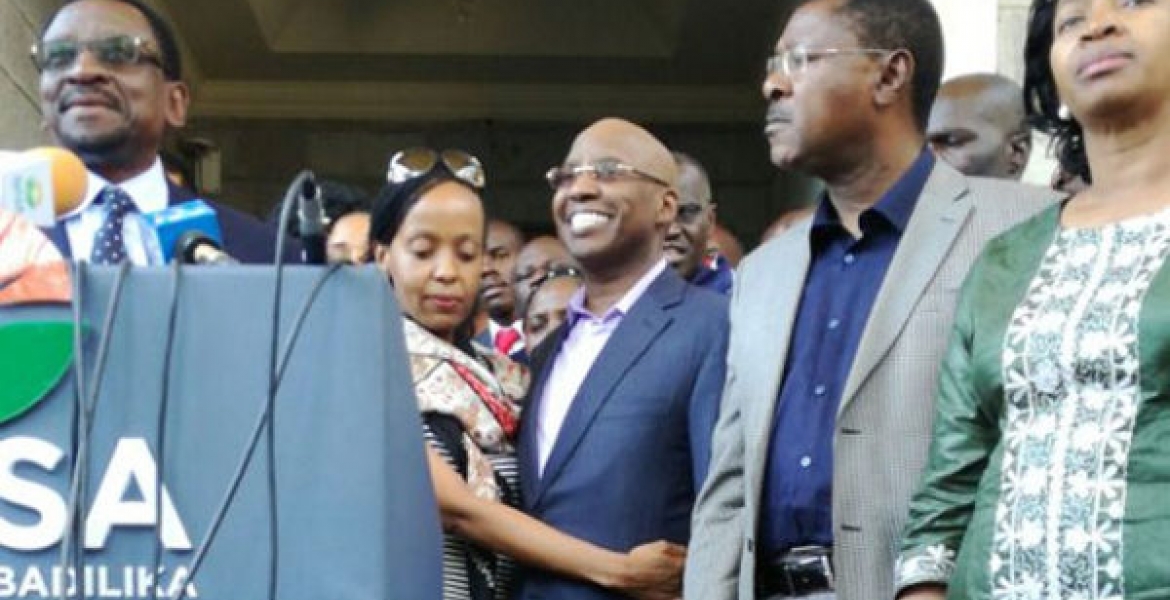 Businessman Jimmy Wanjigi finally resurfaced in public on Wednesday after disappearing for two days following the raid by police on his palatial home in Nairobi's Muthaiga estate.

Wanjigi, who had locked himself up in a bunker since Monday, came out of his house in company of National Super Alliance (NASA) leader Raila Odinga and other opposition leaders.

Addressing the media at his Muthaiga home on Wednesday morning, the billionaire described the raid on his house as an “absolute persecution and an unjustified siege his family need not to have gone through.”

Wanjigi said that he was innocent and thanked Raila for coming to the rescue of his family.

“Were it not for Raila, I don’t know where my family would be right now,” Wanjigi said in the press address called by opposition leaders.

Wanjigi said that it was sad that the government was harassing him, when actually it (Jubilee government) was formed in the very house it was raiding.

“This is not a strange home and they have come here several times {Uhuru and William Ruto}. In fact, their government was formed here,” said Wanjigi.

Speaking at the same media briefing, former Prime Minister Raila Odinga condemned the raid on Wanjigi home, saying that it was sad that police continued with the siege even after Wanjigi obtained a court order barring the search on his home.

In a statement on Tuesday, government spokesman Eric Kiraithe denied claims that the raud was politically instigated, saying it was a crackdown on a “nefarious criminal”.

“The police are doing a very simple task, which is not politically motivated. The raid on Wanjigi’s home means we have a nefarious criminal in our midst, who has been uncovered, period,” said Kiraithe.

This is political witch-hunt. Moi era is back with vengeance! An attempt to unclamp the grip of a hegemonic elite that has captured the political state of affairs. People will continue to disappear just like Ouko and Msando unless something drastic happen.

You feel big now that you have spilled the bin.dont create nemesis to make somebody happy.all those guys standing next to you are parasites.they are fake.since when would all the NASA battalion close their shop to come to your rescue?its because they know you will write that big check for their campaign.they are broke like church mouse because their big dog SOROS is tired of dishing to fools.they are banking on your good will.ask your beloved wife and I bet u she will tell you the same.its better with those devils you know than those dark angels flipping wings ready to roast u.a smart man is not the big money he make or how well dressed he is ,but how he survive in unchattered territory.dont be enticed to paint your former friends as dogs ready to eat u to another dog with sharp teeth like pit bull.be as opaque as we have been used to know you.thats why we nicknamed you mr 007.be the man and don let somebody step on your shoulder n leave in in the enemy territory.in politics we have no permanent friends or enemies so don't let the cameras and my crazy learned friends who think they know all put you in a flying pan.you smart.after they milk you enough for them n their babies they will leave you behind with no grass to eat to make more milk

Ano. Rubbish! How Much Did Mwai Kibaki Pay Raila for Raila to say "Kibaki Tosha"? How much Dowry was Raila Paid for His Son to Have a Kikuyu Wife? In other Words: Did Kibaki or Raila's Kikuyu In-Laws Pay for Raila's Campaign? Ok. Thii na Wega! Bye!!!

If she were dark skinned,would still say she is hot... just wondering because from the picture,I cannot really tell if she is hot. Caring... may be.Unless you know her personally.

You said it @maxiley... their is fake and real, and sometimes the line is too thin until you get much more details. How many have burnt their fingers by jumping into decisions based on useless things?

...Jubilee was formed in your house, and now you are singing baba, just telling us what a turn-coat you are... all that matters is how much money you can make from whoever. I guess from today you might be wondering whether 'money' is all there is in life.....

Kenyans should look at the bigger picture , imagine There was no Government who would be In control.Failed states like Libya with nobody in charge
They difficult to come to agreement.And Kenyans should know changes take time to take root

Jimmy Wanjigi has a beautiful wife.
I don't understand know they are attacking this diplomatic man.

Jimmy looks too happy for a man under seige. Uhuru, go repair the guys door and whatever was broken. Jimmy stop playing with Kenyans lives. Odinga Retire.

Anonymous... did I just understand that you called your mum a cockroach? Haiya, kumbe!