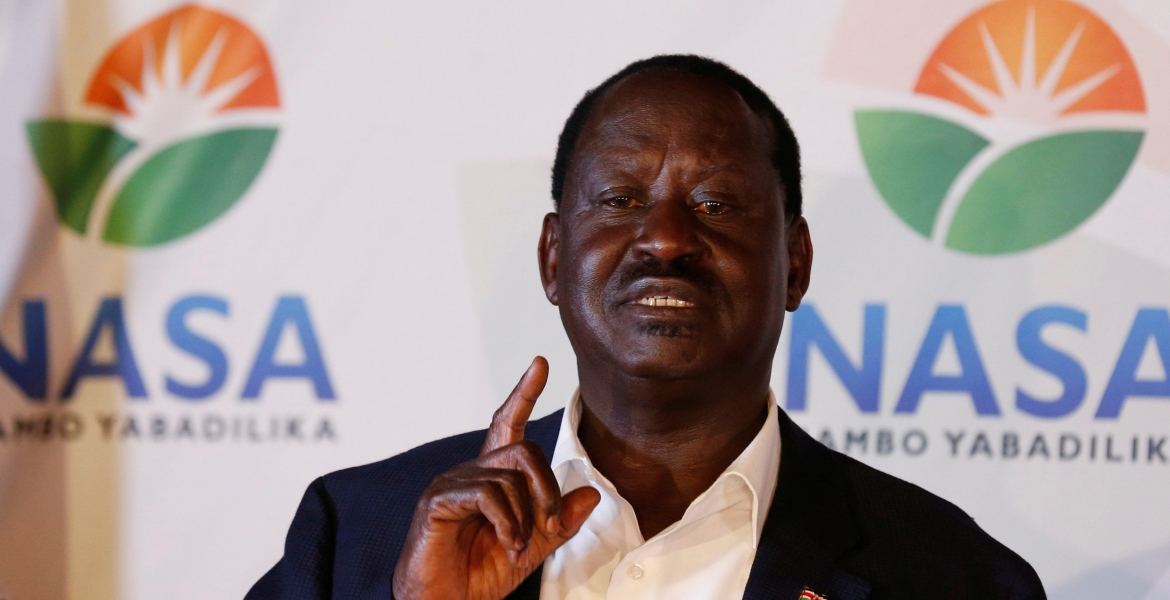 National Super Alliance (NASA) presidential candidate has announced he has withdrawn his candidature from the repeat presidential election set for October 26th.

Speaking in a media briefing on Tuesday at Okoa Kenya Offices in Lavington, Nairobi on Tuesday, the former Prime Minister said he will not be part of the repeat poll ordered by the Supreme Court.

"This a statement of withdrawal from the forthcoming election of Rt. Hon Raila Odinga and Hon. Kalonzo Musyoka," Raila said.

"After deliberating on our position in respect of the upcoming election, considering the interests of the people of Kenya, the region and the world at large, we believe that all will be best served by the party vacating its presidential candidature in the election scheduled for 26 October 2017."

Good riddance, you have only contributed to economic and now you know you will loose big time. Just go away.

I am back Omera. I meant to say Raila has contributed to economic slowdown of this country. In addition his statement is not an indication of concession at all. He has left the country hanging, not knowing what this man wants.

Hold your Horses! And Hang Your Harps and Trumpets. And if you Trumpet, Trumpet Good Music (as Robert Mugabe would say). Note: What the SCoK said on Sept.1, 2017 was Final: No LEGALLY Elected President in Kenya And so What NASA Has just LEGALLY done has Plunged Kenya into a Constitutional CRISIS that Could in Turn Plunge Kenya into a Mega Economic Crisis THANKS to IEBC Nonsense. Uhuru is Still a Lame Duck "CARETAKER President" and NOT an Elected President.

Who is chicken now? I would like to say this is an honorable way to avoid election defeat, but the dude is already announcing plans to destabilize the country - what he knows best. I hope Uhuru will deal with him the same say Moi dealt with him.

Jambazi Uhuru cannot deal with muuaji Raila the way muuaji Moi did.Muuaji Moi had constitutional powers to detain without trial.They were removed by the current useless constitution which turned Kenya to a lawless country where murderers and other criminals enjoy more rights than the victims.

This would be commendable were it not the beginning of destabilizing the country. This man is old but he never grew up! He thinks he can call for election at his convenience. I wonder what Maraga, the pretentious stickler to law would say about that....

Now the Grand Supreme Court can fathom their folly in dancing to Raila's tune. Billions lost, hate through the roof and Investor confidence shaken. Atleast it is now clear who cares for Kenya and who is a bad joke! Kenyans will remember Raila for the con he has become not the hero he never was. Y'all Should have listened to Miguna Miguna @ "Peeling back the mask"

What a f#$$$$ loser . So so annoying . Now here comes the Arab Spring, this Raila's end game. He want to see Kenya burn if he cannot have his way , it is burn baby burn !

Finally we can all breath! This guy R.Odinga can leave us alone. He should pay what the treasury has lost as revenue due to the uncertainty of elections nullified. Mzee wa nusu mkate sasa haende bila mkate at all. Defeat was coming like a tsunami, i wish he would have waited to face it like a gentleman.

@Kim that is very true. There is a reason why supreme Courts world over do not overturn the WILL of the PEOPLE. They are not crazy. Screw Maraga and thugs.

Maraga should come out from his hiding place and tell the people of Kenya the whole truth and nothing else but the truth. Raila was defeated and he knows he cannot defeat Uhuru. He searched for the nearest exit method to avoid the shame of big defeat.

Shame on you Raila. What a clown. This is not funny at all. This fool is playing with other people's life. What a hypocrite. Kenya is much bigger than one old stupid fool. No blood should be shed for any politician. What Raila is doing is extremely dangerous due to the fact that most of his supporters worship him like a god. I just hope the government does not give in to any more of these immature stunts. The country has been held hostage long enough. Life must continue, peacefully. I know Raila has stashed millions of stolen shillings in foreign countries. Move into one of these hideout and stay there. Go away.

I don't believe we have heard the end of this. This seems like a crafted ploy to destabilize the country further. Naughty, naughty... there must be law against this kind of madness. I hope Uhuru and his camp will now step up and.......I don't know...this is messy and beyond imagination. Sabotage.

It is time to be firm and vigilant. Apply anti-terror laws to their fullest extent. Ojinga has made it clear he has no I interest of Kenya at heart besides bleeding it a slow painful death till his Dracula ego is satiated and terrorizing innocent kenyans. He has a well crafted civilian treasonous coup in play. At some point he has to be arrested and court marshalled for threatening the lives and livelihoods of 45million Kenyans. Hatutaki mchezo.

This is a rogue withdrawal that has hints of a man keen not to go down to retire alone. This is a long-hard-go-figure for the citizens, JP, judiciary, IEBC and international community. This is a test on the resilience of our democracy by democrazy. Methali na misemo yaweza kubadilika "Asiyekubali kushindwa sio mshindani ni.....