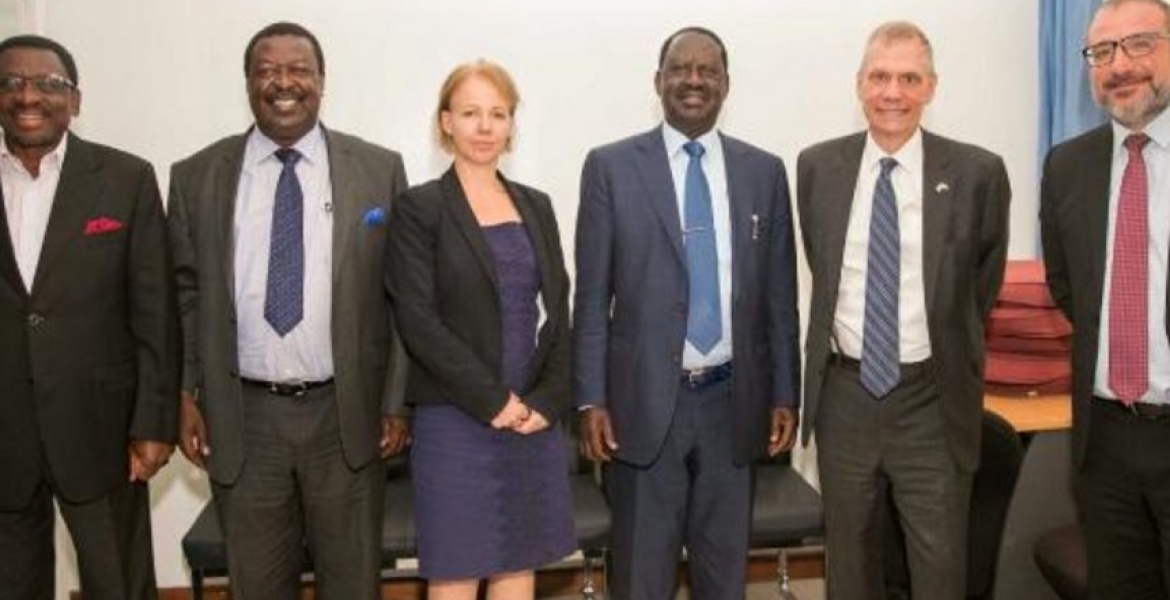 "We exchanged views on the country's political situation which proved to be very fruitful," Raila said via Facebook page.

The Orange Democratic Movement leader was accompanied by his chief campaigner Musalia Mudavadi and Siaya Senator James Orengo at the meeting held at his Capitol hill office in Nairobi.

"NASA appreciates the keen interest that the US, EU and UK have taken in the Kenyan electoral process," the NASA leader said.

The envoys were led by Ambassador Robert Godec (US) and Chief Observer of EU Monitoring Kenya Marietje Schaake.

After the August 8th election, diplomats had mounted pressure on Raila to accept defeat following the declaration of President Uhuru Kenyatta as the winner of the presidential poll by 1.4 million votes. International observers gave the poll a clean bill of health, saying it was largely fair, but the former Prime Minister disputed the results, saying it was rigged.

EU in a statement said that an examination on 1,558 randomly selected scanned polling station results forms from 82 constituencies found that a percentage of them were unreadable, others had mathematical mistakes, and others were missing data or signatures.

Certainly the foreign envoys must have told RAO of the pending consequences of his stupidity and nonsensical behavior and utterances. They must have told him elections must go on.

He cannot keep fooling everyine all the time. The international community knows Uhuru won and Raila is deliberately causing confusion to sabotage polls, so they told him he will lose and they will not support his attempts for nusu mkate.

This is why a white man will never respect a black man.What a pity that Rao sees a white man as a god and Uhuru as the bigger enemy. Talk of self hate, inferiority complex, colonial and slave mentality. These white pips did a photo op with these fools just to appease them. These are actions that make Africa to NOT be respected in the world. Have you seen Trump or others from Europe or even Asia go to Africa to complain about their opposition rivals? Bure, bure kabisa. They are an embarrassment to Africa. Lakini tunajua wembe ni ule ule. Lets see whether the whites will break their legs coming to rescue these thugs come October.

I hope that all stakeholders(both domestic and foreign) talk to Maraga and his crew of 4 at the supreme court and tell them that they should respect the will of the people. RAO and Supreme court justices should not be given credit for stealing the clear will of the people. Credit should go to the JUBILEE Party Leadership for taking the situation in stride and making the best of it anyway.The courts need to be very aware that elections are inherently risky and costly both financially and also to the PEACE and STABILITY of the country.Therefore they should not take the country thru unnecessary repeat elections.Jubilee will win again this time with an even greater margin of victory.May the courts affirm the clear will of the people so that Kenyans can move on to activities of Nation-building and Development.