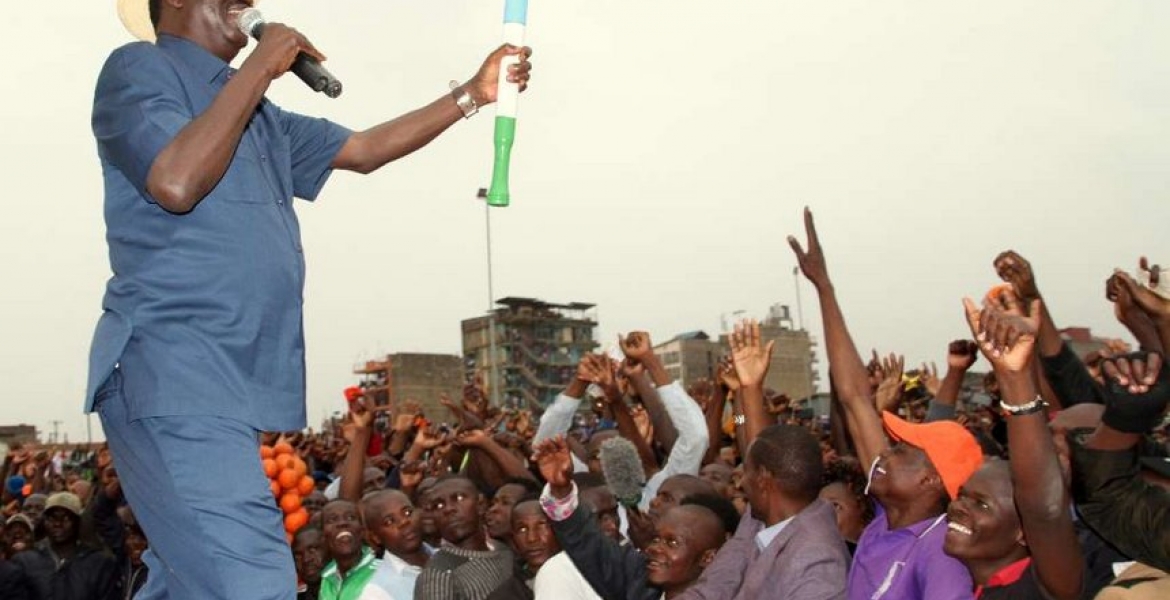 Speaking at a rally in Kawangware in Nairobi on Sunday, the former Prime Minister said that Nasa will not relent in their bid to ensure electoral reforms are in place before a repeat presidential election slated for October 26th.

“On Tuesday we are going to Anniversary Towers to hound out of office IEBC officials who bungled August 8 polls led by Chiloba. We still insist that our demands be met by IEBC before the fresh election.” Raila said.

NASA presidential running mate Kalonzo Musyoka noted that the Supreme Court restored faith in Kenya’s institutions by overturning President Uhuru's victory, adding all parties in the repeat poll must be on a level playing field.

“We don’t have a problem with going back to the polls, but we cannot allow the same officials that skewed the election in favour of President Uhuru Kenyatta to preside over the repeat election,” Kalonzo said.

Earlier, while attending a church service at PAG Kangemi, the NASA leaders vowed to oppose any attempts by Jubilee administration to trim Judiciary’s powers.

“The Supreme Court nullified a bungled election on September 1 and now Jubilee wants to interfere with the independence of the Judiciary we want to say we will not accept that to happen.” Wamalwa said.

The leaders further termed Jubilee push for vote recount as futile and demanded that IEBC servers be opened so the winner of August 8th polls are known.

“Jubilee leaders keep on insisting that the Supreme Court judges should have ordered a re-count of the ballot papers. I want to tell you that there is no point in doing that because they have already been tampered with, and in any case IEBC should have allowed interested parties access to its serves to establish if the polls were not bungled,” Nairobi Woman Representative Esther Passaris said.

Raila, you have nothing else in your mind than to destroy Kenya. After all, you have nothing to lose, you are rich enough and if Kenya disappears, you can flee abroad with your family and live comfortably there for the rest of your life.

You are waste of energy and what Babu Awino would as no space for devil worshippers in Kenya. if you can sacrifice your own flesh God knows what you would do for the country. You go on the streets and throw stones with wentagula, babu awino and kalonzo. ask you wife to strip naked on the streets in what you are asking. Let's all meet in your house at Karen for free lunch and pay us for our lost wages. Invite us to bondo where you have three helipads and oops forgot get us passports ready with visa just incase so we can also run away as political asylums. Raila we know you did nothing for Kibera let alone Kisumu where you stole all the money with the molasses plant. Did I mention that's where you were able to build your house worth 1.5 billion. You enjoy hefty salary and continue to incite young Kenyans rather uplift and fight for their better tomorrow. Raila, Don't be petty and go down this road. Same court that overturned the elections ruled there was nothing wrong with the IEBC. Infact all we had there was nothing wrong with anything. Follow the rule of the Law. They are on your side. They gave you best gift by allowing you another chance. You are coward but we know you are not circumcised. Face uhuru like a man and campaign like a man. Stop all this nonsense. We are tired of your Political tantrums..You are Useless, worthless and mavi ya kuku.

Let us strive for a higher standard of communication where name calling, put downs, and plain insults are retired permanently. Yes, we can!