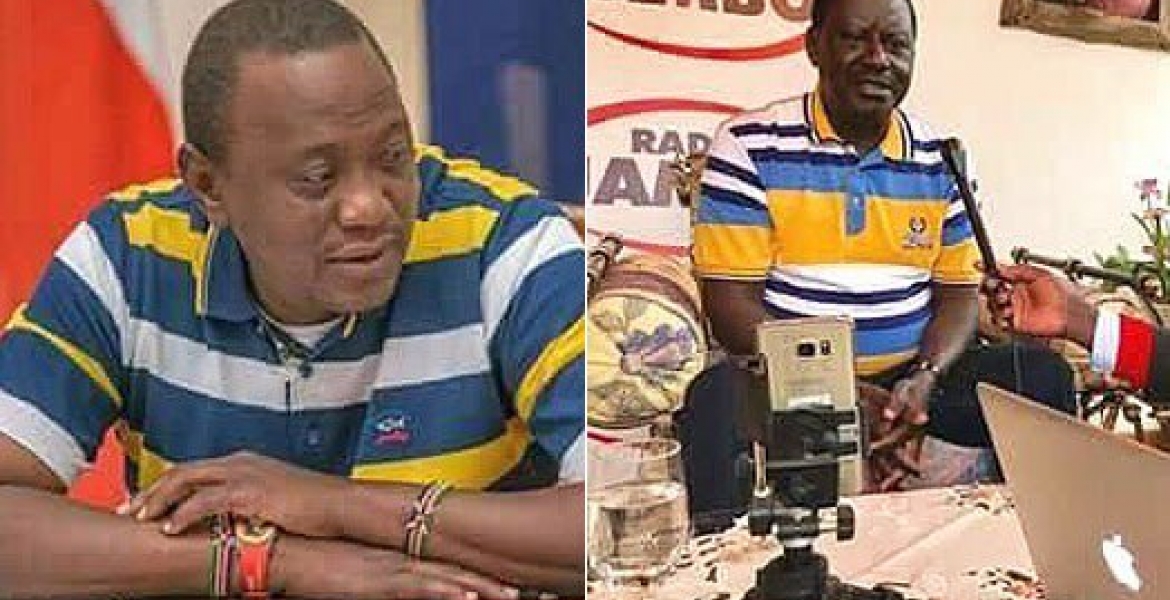 During his live chat on Facebook on Sunday morning, President Kenyatta appeared in a unique striped polo t-shirt that had a mix of navy blue, baby yellow and white colors, catching the eye of many Facebook users. Hours later on Monday morning, President Uhuru's main rival in the August 8 General Election Raila Odinga was the guest in a popular morning Radio show aired on Radio Jambo, taking part in a live interview that was broadcasted live on Facebook, but it was not what he said that interested Netizines, what he clad drew their attention.

In a video by Radio Jambo online, the former Prime Minister is seen in a stripped polo-shirt with a mix of light blue, navy blue, orange and white, nearly identical to that of President Uhuru Kenyatta. These raised a heated debate on the Orange Democratic Movement (ODM) leader, with some calling him a 'copycat' .

Here are some of the reactions"

" Joshua you are becoming too much, you a going to low in what you a doing. Copying everything," Patrick Kimutai noted.

Sasa ongea kikuyu kama Uhuru. If you love what Uhuru does this much, why do we need to change. Uhuruto TANO TENA

Why didn't your Kiguoya show up in Debate for Tank Tena?

May be those t-shirts are a sign of unity- we may differ ideologically but together we stand unified for Kenya...
It may also have been pure coincidence...

Maxiley, I love your objectivity! You brought a smile on my face when I read your comment. Good spirit...

We have fake leaders who bank on people’s fear and empty pocket to make them look important.instead of being Kenyan servants. They behave like gods.god forbid ,they will have to know if kenya sink they won’t hind.we as Kenyans will look for you.no hiding place in this world.west or east

This is a non-issue. Clearly, there are some Kenyans who have nothing to do or even think about. I was really wondering what on earth could have been copied. Copying should be in the other direction for any value to be achieved. I definitely prefer RAO's usual style more, but the only reason I noticed is because you pointed it out! Thanks for wasting my time Kenya News.

wee, its only uhururuto but live knowing after 5 yrs we will not be hearing of ruto...in government. we voted for uhuru and not ruto