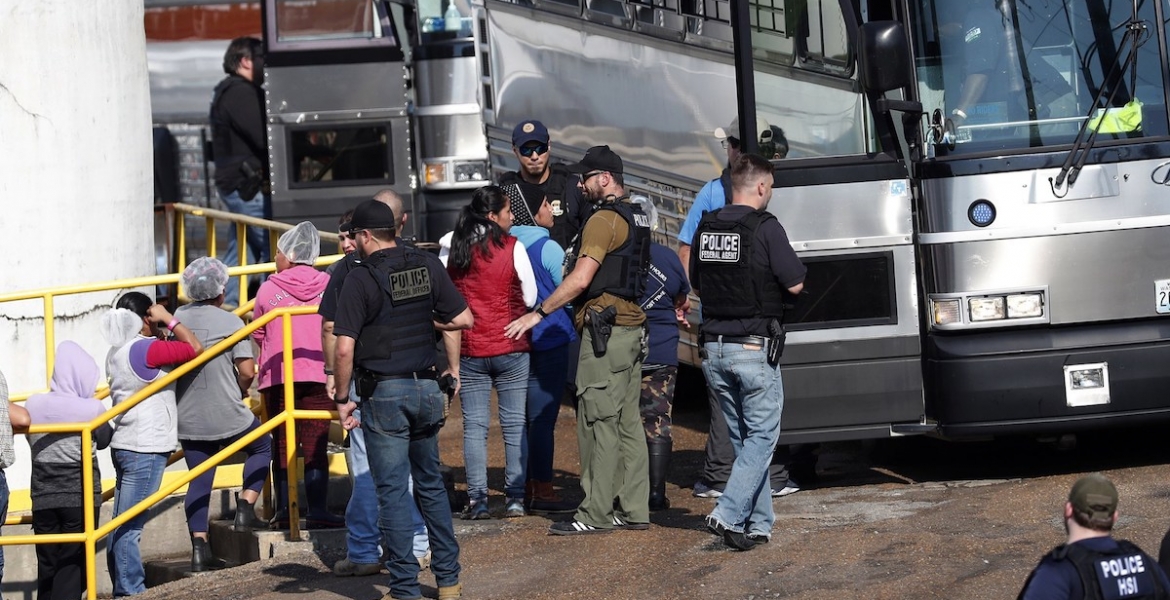 The Wednesday operation was termed the largest workplace sting in over a decade.

About 600 Immigration and Customs Enforcement (ICE) agents surrounded several food processing plants to prevent from escaping. They then asked for identification from all workers at the plants, and those suspected to be in the US illegally were arrested and told to deposit their personal belongings in plastic bags. They were then loaded onto several buses and taken to a military hanger for processing.

Poor journalism, hiw does one narrate the event without mentioning where it happened....stoty doesnt add up

Wow wow i overheard they will raid nursing homes/group homes soon.Wakenya wenzangu it's good to b prepared incase.I have insisted to my haters unakula saba unaweka tatu for that shit day incase it happens.

Oh thank you we feel your empathy.., and isn't eating some and saving some the norm? If you need to tell someone that and help them, tell it to your kids.

How is this not on CNN?

This raises questions now that it happed after Koch brothers have come into conflict with President Donald Trump on issues including trade and immigration, and they reportedly told other major conservative donors this winter that they will not back the incumbent president in 2020.

Where will they get people to work those jobs Americans do not want to work. There is a time the published harsh conditions that people who work in those poultry factories go through. They are not given breaks to an extent workers wear diapers.

The Koch brothers,who have always supported republicans, came into conflict with President Donald Trump on issues including trade and immigration, and they reportedly told other major conservative donors that they will not back the incumbent president in 2020.Makes you wonder.

lesson...fix your country and stay there, most of us run away from issues back home to enjoy the hard work of Americans, we should fix our hospitals, schools, economy instead of flocking to US to enjoy the hard work of generations and generations of americans. You can say that you work for what you earn but what about the security, good schools, good hospitals and good roads...they were built by americans long before you got here. People need to fix their countries and stay there

@Maumau, like @Mkenyahalisi I am assuming you are writing this enjoying your nyama choma and Tusker looking at Mt Kenya. I don't suppose you would be preaching what you don't practice. @MkenyaHalisi thank you for your constant advice. Being that you are a great business man and investor, I would assume you will give your fellow diasporian deportees jobs once they get there.

Criticising should not be conflated with hating. Is it hate when you criticise and correct your loved ones? Many of us send plenty of cash to Kenya which I daresay props up the Kenya economy. I visit Kenya enough to know that the utter chaos should not exist. I'm also old enough to know it wasn't always this way. Is it too much to ask for good safe roads, good safe public transportation,working traffic lights, not having police and assorted govt. officials asking for bribes, foresight and public planning, clear sidewalks. Kenyans are entrepreneurial by necessity due to the failure of govt. It's not the govs responsibility to provide jobs but it sure as hell can make it easier for everyone to do business. There are too many petty functionaries and their bosses looking to make your life difficult if you don't pay a bribe.

@maumauagain u spoke like 20 maumau in 1956.Thats why i insist Blacks Africans to continue investing back home in their respective countries then one day pack n up n F off juu why invest in other pples countries n even if u have papers that place will never b home.We even fly our dead bodies back home n yet the same pple don't want anything to do with kenya.Kama ulidecide kukaa majuu kufia huko pia zikwa huko wacha kupatia wakenya stress ukikufa unataka mwili ipelekwe nyumbani??In short pple shouldnt worry about deportation.Kama umekaa kwa wenyewe for a while n never invested back home or never went to school ni shida yako??Especially to those who r majority negatives about their mother kenya.

No more 5 dollar chicken .White people start getting ready to clean your own homes and work for minimum wage.Food and other services will cost more but at least your waistlines will shrink

Kenyan's are we brain washed? I have heard many Kenyan's talk very poorly of Kenya yet that's where they were born and their parents still leave there. What are they running from? Corruption is everywhere and if you look through the right lenses,the west is corrupt too. If all Kenyan's in the diaspora worked hard to uplift their village with bore holes, solar panels, planting tress etc we would transform Kenya. Let's stop waiting for the govt to do theses things for us.

‘Let’s stop waiting for the government to do things for us?’ REALLY??? The only thing they’ve mastered doing is LOOTING!!!!

Most of us in diaspora love Kenya, it's sad to imagine developing it without the taxes. First world countries though corrupt have road networks/social amenities/security that are maintained with taxes. So fellow Kenyans, we really don't hate the country, its the corruption! Your age mates (born in politician's homes)inheriting billions and you are to catch up with them.... Inflation from stolen cash making life so expensive...let those who can...grab and bring home!