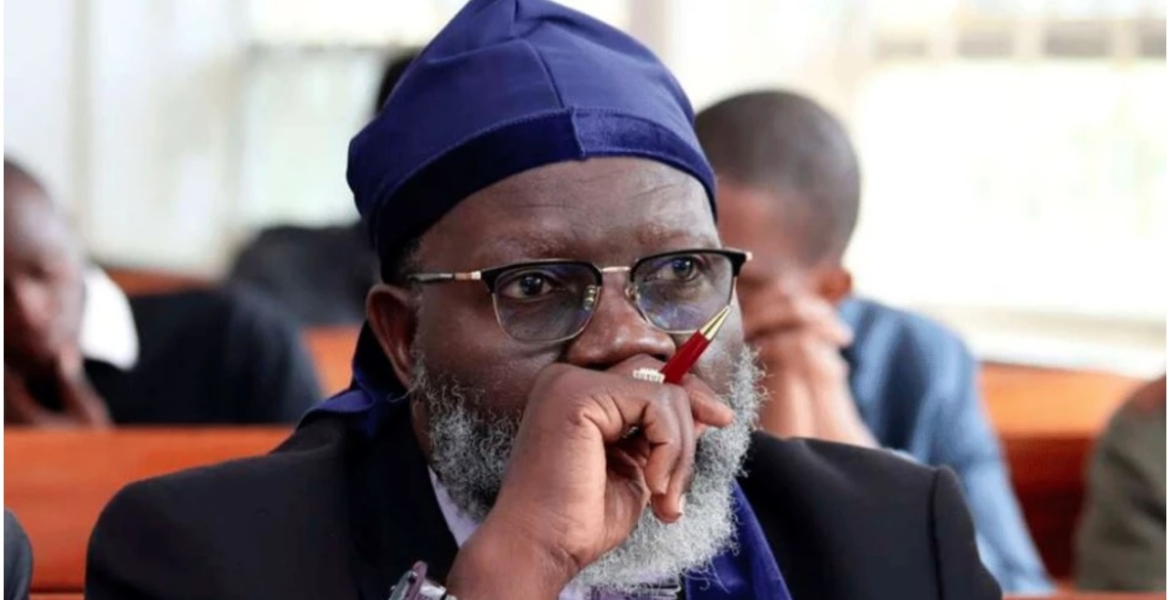 Roots Party presidential candidate Prof. George Wajackoyah says his family is in the process of acquiring Kenyan citizenship and join him in the country.

Wajackoyah, who is among the four candidates cleared to vie for the presidency on August 9th, divulged that his wife, an American, lives in the United States while their kids reside in the United Kingdom,

“I have children and an American wife. She lives in the United States and our grown-up kids live in the United Kingdom,” he said during a recent interview on Citizen TV.

If elected president, Wajackoyah has promised to introduce radical reforms including the legalization of marijuana to support its processing for medical use, and the upscaling of snake farming to produce antivenin.

He argues that marijuana and snake farming can generate sufficient revenues to help offset the national debt which currently stands at Sh8.4 trillion.

“It’s not only Marijuana, we’re introducing snake farming so that we can actually extract snake poison for purposes of medication,” he said.

“A lot of people are bitten by snakes in this country and we have to wait for snake doses from outside the country from pharmaceutical organizations. We have so many snakes in this country and we have so many snake eaters. One of the ways we are going to offset debt is by taking these snakes, extracting poison from them and manufacturing them into anti-venom, and shipping the reptiles to other countries where they are consumed," he added.

Wajackoyah, who picked Justina Wamae as his running mate, announced he will unveil his 12-point manifesto on July 2nd.

He need to stop smoking whatever he is smoking. How many people are dying of hunger in the country compared to snake bites?

This guy is trying to figure out unconventional way of paying our highest external debts while addressing the economic crisis within the country! Would you rather have Rutoh or Raila who are both lying to our faces that we will be getting some freebies? 8 trillion external debt!

Wajacko is lying to your face. How can a dope head know anything about the economy. Him and Ruto are in the same class of dummies with some stolen degrees. Don’t be cheaply influenced by lunatics.

Wajackoyah does not consume bhang. He is just an intelligent SOB who has risen up from the ruins of the society to where he is today. He is a radical but sometimes you can reason with him. We cannot pay debt with snake meat. Snakes are everywhere.

Excellent description of him! Quite brilliant/genius, thinking unconventionally like all other countdul geniuses of the world! People used to think Einstein was crazy too!!

This Jacko is not anywhere close to Einstein in terms of intelligence. He is deceiving every body with silly gimmicks because he knows Kenyans do not research.

He's likely new age. Using alien tech aka demons from what I saw during his interview

Teach these people snakes are high in protein and eat less than chicken . Dogs,cats, grasshoppers,maggot ..are all animals need to be farmed to feed population explosion due to people having babies like rats.

Marijuana and other herbs need to be farmed for there medicinal uses.

Kenya should legalize marijuana + saturate marijuana education so that the population fully understands pros and cons. Using a scant police force to arrest users is a waste of public resources. As far as snake farming is concerned, if the activity yields some income what is so wrong with that? We have alcoholic businesses booming yet we know this is unhealthy.
I would vote Wajackoyah any day because he is the only serious candidate who wants to fight corruption by hanging.

Why exactly is he in the race he is not going to win and has no value as a running mate 85% of voters never heard of him and they do not care who he is.

Denver Health’s substance treatment program sees roughly 500 youths each year for substance abuse, and Dr Christian Thurstone, a child and addiction psychiatrist who has worked in Denver Health’s adolescent substance treatment program for 18 years, says 95 percent of the referrals he gets are for marijuana, which, despite popular opinion, has been proven to be addictive. Concentrates, with their higher THC levels, may be even more so. But it’s not just the standard trappings of dependence that are worrisome to health care professionals; it’s also that they’re observing a correlation between cannabis concentrates and mental health issues, such as depression, suicidal ideation, psychosis, and schizophrenia, as well as disturbing physical conditions such as cannabinoid hyperemesis syndrome, characterized by severe vomiting.

“The scary thing about this,” says Dr. Christian Hopfer, an addiction psychiatrist at UCHealth’s Center for Dependency, Addiction, and Rehabilitation (CeDAR), “is that this is a relatively recent phenomenon. We don’t know much about how extremely high doses of THC affect people, children or adults. We’re seeing greater risks of psychotic disorders and serious effects to cognition in our kids, but we have no real understanding of what these concentrates do to the developing brain.” That is why so many different stakeholders—doctors, researchers, legislators, psychologists, school districts, advocacy groups, and parents—have been throwing up flares.

And there were 3051 alcohol related deaths in Colorado in 2020. It's surprising that he doesn't address this or maybe not. He clearly has an agenda. Specifically, in the past people were forced into the good Doctor's practice by the criminal justice system but with legalization, self admittance is now what drives his business. That would lower his supply of new patients and affect his bottom line. I'm just cynical enough that I believe he would scaremonger to get new patients who aren't fully in control of their lives yet - read teens. There are many things that are addictive, alcohol, cigarettes etc that also have deleterious health effects. Once people reach adulthood, they really should be free to decide for themselves.

In the medical field more and more patients are taking marijuana extracts for a myriad of medical issues including in conservative states like Texas. Speaking of Texas. Cities like Sweetwater, Texas have been sustained by snake rearing..hunting..eating..snake expos google it. I wouldn't be quick to dismiss him. I just don't want him to mislead the youth.

So many degrees and allegedly Smart but running for president is the dumbest decision he's made. Zero chance. If he's looking for visibility then he's got it

I guess his manifesto will focus on snake breeding and marijuna.I didn't even know he was a presidential candidate till I saw this story.

Kenya is one huge snakepark. So many humansnakes waiting to be bribed by politicians.

Wahjakoya ain't a man that everybody wants it's just his own manifestos that makes people select him,I prefer selecting Rutto or Raila than that snake man

Would a dope taking thug like this idiot have an American wife and kids? Which American woman would fall in love with a dope head?

Some women seem to like bad boys, even if it's merely a perception. Others like intellectuals with a hint of revolutionary in them. She might perceive him as such. BTW having just moved to Colorado where weed is a $2.2 billion industry, a large percentage of the tax revenues are used for schools. It's not a total solution for Kenya but since people will consume weed regardless of legality, make it legal and collect taxes and use it for schools. It will also reduce the need for prisons, jails, jailers and wardens. It will also get rid of two classes of criminals (users and peddlers).