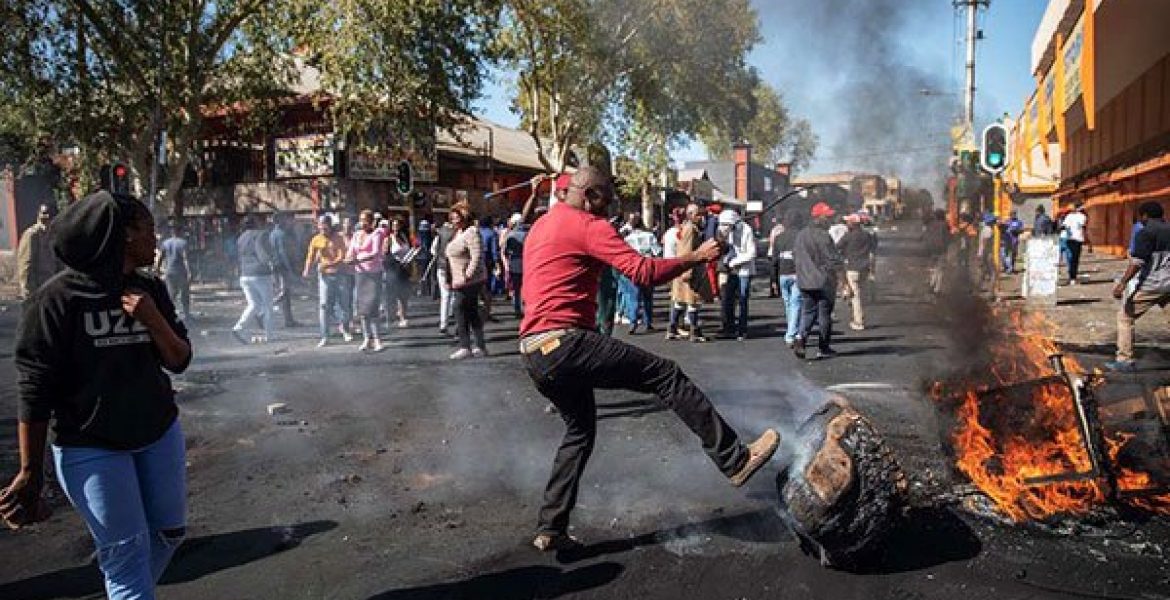 Kenyans in South Africa say they are living in fear following the recent spate of xenophobic attacks targeting African immigrants.

Kenyans who spoke to Citizen Digital painted a picture of how bad the situation is; with some saying they escaped death by a whisker while others lost property.

Simeon*, who works at Gandhi Square in Johannesburg, said he found himself alone at the office on Wednesday as other employees stayed home out of fear for their lives.

“Looks like most people stayed home… Most shops are also closed for fear of attacks and looting,” he said.

Joe*, who has lived in Gauteng for eight years, narrated how he escaped death narrowly on Tuesday evening. He said he was driving home through a town adjacent to Pretoria when a group of rioters blocked the road.

“They started throwing stones so I accelerated. My car windows were shattered and bits of glass cut me, but it could have been worse. I could have died,” he said.

He said five of his friends from different nationalities were killed while six business associates lost their property to looters.

“These attacks are targeting foreigners, none of us are safe. If they find you, they finish you,” said Joe*.

Another Kenyan, Mike*, said children are unable to attend school in Pretoria. “Most of these children are being raised by single mothers who have now lost everything and now have nowhere to go,” he said.

Stephanie*, a Kenyan mother of two, said rioters raided their neighborhood on Monday, only stealing from shops belonging to their African counterparts.

“I am home and can’t go to work. My two children can’t go to school because the rioters are blocking the roads or searching the vehicles. It is not safe,” she said.

“Black foreigners don’t even go for white-collar jobs since they are regulated. It’s almost impossible to get one since there are processes. If they cannot find a suitable person nearby, they even have to advertise and have to ensure that no citizen can fill the position before they give it to a foreigner,” Stephanie* added.

“…Several  Kenyan citizens have been affected by the recent spate of violence through arson and physical violence as well as reported incidences of looting in various sections of Gauteng province,” Kenyan High Commissioner Jean Kamau said in a statement.

Close to 200 people have so far been arrested in connection with arson, looting and physical attacks on immigrants in Pretoria, Johannesburg other cities.

Police officers fired teargas, rubber bullets and stun grenades in an attempt to stop the looting.

South Africa President Cyril Ramaphosa said the attacks are "something totally unacceptable, something that we cannot allow to happen in South Africa." "I want it to stop immediately," he said during an address.

Mr Ramaphosa,those few words will not assuage the fears foreign africans now have. Please be alittle forceful.Remind them how they felt under apathaid.Remind them of our common values,and ancestry.Killing abantu from kenya is akin to killing your own brother...
Not that other tribes should be attacked. just dont do it.Remind them that south africans are spread in those countries the victims originate.
Finally, this is apoor example to the world.Do we like to be called savages?
Again where are the good south africans protesting this animalistic behavior?

I have always insisted that have a plan b especially to those who have called other pples countries home whether u have papers or not.Kwenyu ni kwenyu.This southafricans r useless juu the big problems is not black immigrants the problem is the white southafricans who stole their land??

@Tusker, KARMA? Explain, I fail to see your point. This is just savage behaviour. Period. Disturbing how they can turn on their own. Alafu, probably most can't fit into those posts or have the akili to run a business. I would urge OUR people (Kenyans) to scram. Inahuzunisha sana.

This is to the extreme...that's why you need an AK 47 TO PROTECT YOUR INVESTMENTS..because the government won't do a damn thing to help you recoup your losses...KA MBAYA MBAYA....PERIOD.