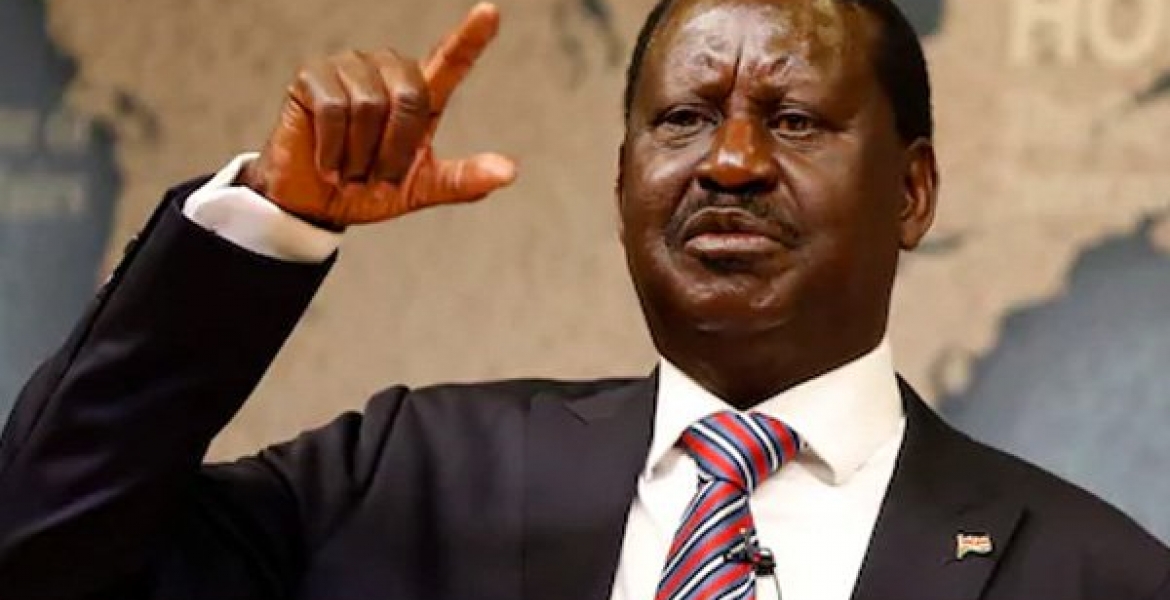 National Super Alliance (NASA) leader Raila Odinga has once again spoken about the secession debate that has continued to gather pace in Kenya in recent weeks.

Addressing Kenyans living in the US in an auditorium in Jersey City, New Jersey, the opposition leader said he is personally opposed to calls of breakaway from Kenya and he would love the country to remain a unitary nation.

“I’ve said it in another forum that we are for a strong unitary nation of Kenya. The reasons why you see people talk about the possibility of secession are signs or symptoms of frustrations,” he said.

Raila added: “They feel they don’t have a stake in their country… these are the issues that must be addressed.”

The Orange Democratic Movement leader further laid bare the strategies Nasa will employ to reject attempts to return the country into a dictatorship.

“That is why Nasa’s leadership is centered on a campaign of peaceful resistance to an unlawfully constituted authority," he said.

"We have convened a people’s assembly to guide the country to a fresh, free and fair presidential election, as decreed by the Supreme Court."

Raila said he was in New Jersey to also unveil the USA chapter of the alliance's Resistance Movement.

“The real issue about Kenya is not the rigged elections. That is not the issue. The issue is deeper than that of just rigging of an election,” he said in New Jersey on Saturday.

“When you see some governors stand up and say ‘we want to secede from Kenya’, supported by members of parliament and members of county assembly, then you must know that there is something seriously wrong with Project Kenya.”

Raila might as well have said that, elections are not the real issue.He says" the issue is deeper than that of rigging of an election". Now tell us what THE REAL ISSUE is...
Lets hear the real issue,and then we can decide if your " prescription" for that issue is the remedy Kenyans want.

Raila knows breaking up Kenya is a tall order and will achieve nothing. He knows, you break it up and the same Kikuyus and Kalenjins you will be running away from will end up ruling the new republic. And they will also rule the leftover central kenya. Why invest in fruitless efforts.

Here we go again with the interminable assertions and declarations from baba, that are meant to keep us spinning in a fatuous loop.

Cleverly claim how he supports a unitary system, while his leutinant Kaluma is busy petitioning for secession! But still find it apt to deny in broad daylight that he has no finger on it.

It is as clear as daylight Mr Kony. That the bottom line is: only an election which you are declared the winner (whether you win or not) or a coalition government, is what will appease you.

I don't see how any of these will happen. So come out of the closet and declare your support for secession. Then we go from there.

Fake Joshua know that if they break-away he will be reduced into the level of a village chief. No luxuries that a luo men likes. UN will not recognize that new country

Most of Kenya's Savimbi's,(muuaji Raila) investments are in Nairobi and the devil knows his property will be seized ones he move out of Nairobi.The opposition must substitute their candidate,muuaji Raila if at all one of them is to rule as no one can forgive the savage's sin/offence of 07/08 mass murder.

Creation of counties may have been construed to be independent units of Kenya, governors are mistaken to preside over kingdoms. So these units are being used to intimidate the central government and other counties. Why would baba deny in public what he preaches through his henchmen? If Rao is personally opposed to secession; why are his people still obsessed with it? we know baba's word is law to nasarians, his opinion is their duty and destiny. Tangentially, I think baba is a good man with evil handlers around him. Let them hear that baba the virtual president is opposed to this idea-it will rob him the dream of being kenya's nth president.

The main problem in kenya is Raila. Kenya need a revolution against raila than anything else. He must be aware of that!

I don't like funnels obviously because those that I attend are for those I know and maybe close to me but one that I shall attend and enjoy is the one we shall be lying this sumbua Kenya idiot to rest or to bask in turmoil. Maybe more to ensure that the bugger is completely dead.