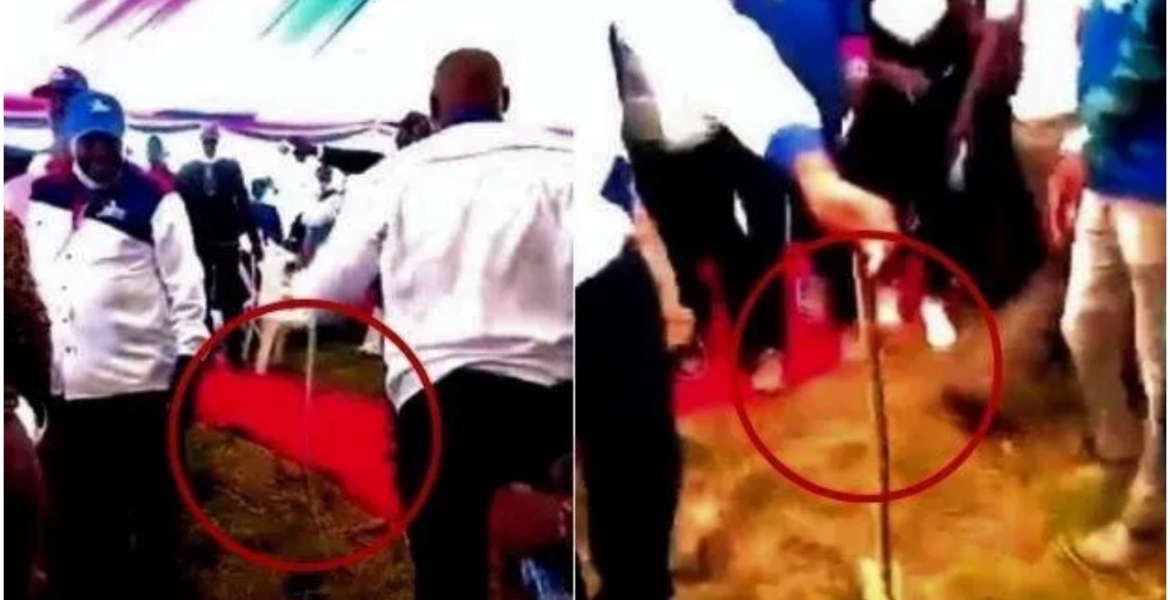 A meeting of Wiper leader Kalonzo Musyoka was on Saturday briefly interrupted after a snake appeared from the nearby bushes.

The snake caused a moment of commotion during the meeting held at Musyoka’s Yatta farm in Machakos County.

A video shared on social media shows some attendees scampering for safety after the snake made its way into one of the tents.

Others are seen throwing stones at the serpent, thereby killing it before one of them picks it up and takes it away from the tent.

Musyoka, who is eyeing the presidency, was hosting Ukambani leaders in an effort to consolidate his support in the region ahead of the August 9th general elections.

The Wiper party leader is one of the four principals of the One Kenya Alliance (OKA) which is seeking to front a joint presidential candidate in the forthcoming elections.

Gangster Kaluki Ngilu who like other thugs,kina Kalonzo,Wanjiru and muuaji Raila believes in witchcraft had sent the serpent to grace Kilonzo’s ceremony.That is why Kalonzo remained silent as he expected Ngilu’s representative.

Kamba people have the highest number of witchdoctors in the world. Kamba culture is driven by witchcraft. Kamba witchcraft generates about 20% of Kamba's GDP it's no wonder you see this kind of things. That snake was planted by someone to generate publicity-negative or positive depending on the way you look at it. The presence of a snake in the occasion is supposed to send a message to the public on Kalonzo's candidacy

It's true 99.9% of Kamba people believe in witchcraft and have experienced some kind of witchcraft miracles in their lives. For example, when I was a young girl in a school at Makueni I witnessed demons terrorizing my school and nobody could help it not even Kenya Police. Stones projectiles were emitting from nowhere and hitting people. The police that were called to help run away. This is something that was in the newspapers, and you can verify it with Daily Nation. Witchcraft is part of our Kamba culture and it is not going anywhere

Even a snake does not wish to see Kalooser near presidency. Speaks volumes.

If you believe in witchcraft shit to bring success, you are doomed in life.