Mudavadi to Kenyans in US: How Western Powers Blackmailed Raila into Accepting Handshake with Uhuru 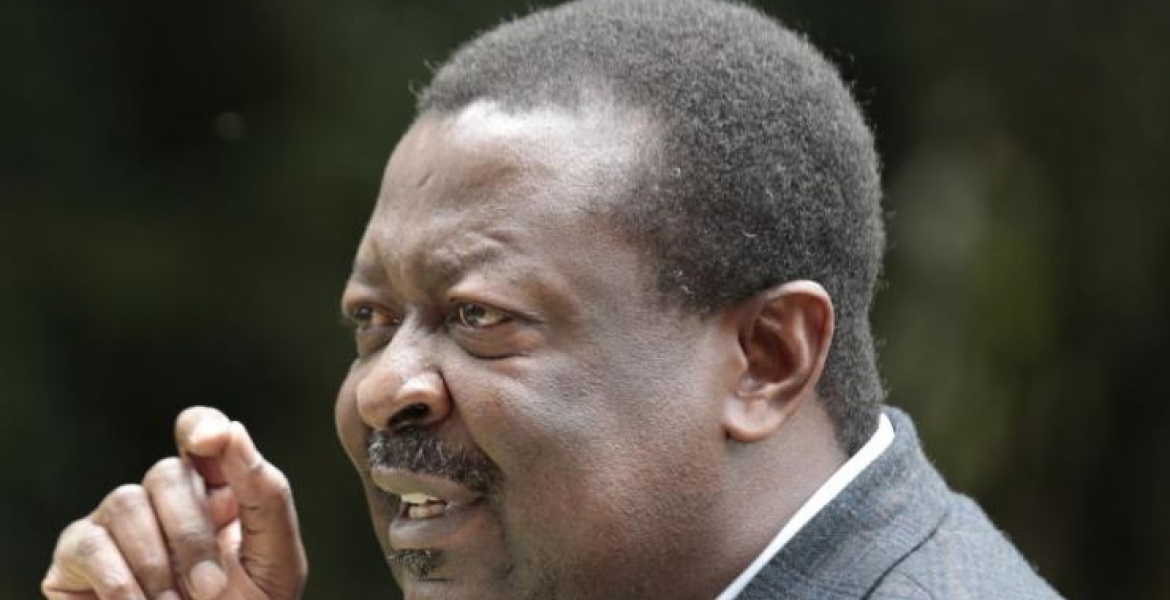 The March 9th, 2018 handshake between President Uhuru and ODM leader Raila Odinga was as a result of blackmail from Western powers, Amani National Congress (ANC) leader Musalia Mudavadi has claimed.

Mudavadi made the claim when he addressed a meeting of Kenyans living in the diaspora during his tour to the United States, according to The Standard.

He told the gathering that Odinga agreed to a political deal with Kenyatta after some Western nations withdrew visas for opposition leaders, their family members, and associates.

“The secret is that slowly visas were being canceled. And when Visas are canceled, they don’t just cancel yours alone. They cancel yours, that of your wife, children, and relatives,” Mudavadi was quoted by The Standard.

Mudavadi, who addressed a meeting at Muungano SDA Church in New Jersey on Tuesday evening, said the Western nations, which he did not name, indicated they would only restore the visas after the handshake.

“I want you to go home knowing that I, Musalia, do not believe in cheating you. I believe in telling you the truth. So what gave birth to a handshake is personal survival rather than patriotism,” he noted.

He also pointed out that the mock swearing-in of Odinga as ‘people's president’ was not based on patriotism but personal survival.

“I am speaking to my fellow Kenyans and I want to deliver some hard truths because, for too long, propaganda is spread and we get carried away,” he added.

However, Odinga’s spokesman Dennis Onyango dismissed Mudavadi's claims, saying that he was displaying ignorance as he was not involved in the handshake deal.

"This is a homegrown solution where foreign nations had no role to play and Mudavadi didn't know, and even now doesn't know, what happened,” said Onyango.

He added: “In any case, the two leaders agreed to have the handshake before the then US Secretary of State Rex Tillerson arrived in Nairobi to avoid a situation where it would be perceived the West had pushed them."

Mudavadi has been on a 10-day tour of the US which ends on Thursday. During the trip, Mudavadi urged Kenyans abroad to back his 2022 presidential bid.

Mudavadi nyamaza. If you got nothing to say zip it up. Kenya is better with handshake than it was before. You know you betrayed Odinga during bonoko swearing in.

We all knew the handshake was a matter of personal survivor. Raila was headed to the ICC at the Hague. The only way to avoid that was to make peace with the crocodiles. Hence, the handshake.

Sukuma STOP your mediocrity; even your Bullshit. Your comment had no basis whatsoever.

Its a personal crisis when politicians are denied foreign visas. Thanks Mudavadi for letting that out. Kenyans are doomed!

It looks like there is a cloud of smoke coming out of the chimney from NASA house. Is the smoke white or black? Musalia M. swing by Canada and i will buy you CANNABIS to take it to 254, your people, if you have any, won't wait for long to see the white smoke. It's legal here.

Mudavadi is a silver spooned overweight Gunia, dream on Buddy as you enjoy your whiskey 🥃

Change of constitution calls usually accompany succession politics.It happened in 1978-9 when the Kiambu mafia tried to block Moi from succeeding the late Mzee.In 1997-2002,we experienced the same.Now,Ruto is fighting knowing any constitutional change will render him toothless! Kenya GDP $70.53B USD as of 2016.
Microsoft Annual Revenue $89.95B USD as of 2017
US 2016 GDP $18.57T USD ($18,570B USD)
Uhuru Kenyatta & Family net-worth $500M USD
Raila Odinga & Family net-worth $250M USD,
Bill Gates net-worth 89.7B USD
Average Kenyan salary: $76 USD per Month
Average US salary: $4,650 USD per Month
An average Kenyan needs to work for 5 years to make the equivalent of what an average American makes in a Month.
World largest slum dwellings:
Orangi Town in Karachi (Pakistan): 2,400,000
Dharavi in Mumbai (India): 1,000,000
Kibera in Nairobi (Kenya): 700,000
Khayelitsha in Cape Town (South Africa): 400,000
Neza (Mexico): 1,200,000
Are you not outraged?
At this rate, we will become slaves again.
Getting rid of these current leaders and putting in new ones has been tried from Zambia to Nigeria.
What should we do then?
The solution starts with you getting outraged and then you can start to figure out where we have done wrong and start taking action. No one will take action on your behalf. Blaming the West, the North or the East, the Luo or the Kikuyu is escapism and will not solve your problems. The solution starts with you giving up your tribe for the country, giving up your tribe for the continent. The solution starts by taking the initiative to understand good governance, economics, finance, education, human rights, freedom of speech. The solution starts by standing up to your tribalist friends and educating them that tribalism has made us poor and weak. It has benefited very few and improvished the rest of us. It has made our natural resources targets from the North, the West and the East. Donald Trump put it this way, "Africa is where my friends go to get rich". Translated in Swahili, "Vita vya panzi ni furaha ya kunguru".

Spot on Sura mbaya- taking action is the only action. Theory and finger pointing time is over. Country first!

Well said. A little self sacrifice and self discipline might also help. When last in Kenya, I took a small detour to Kigali. It is remarkably clean and organized. I don't know how or why but I presume the residents take more pride in their city and it shows. Nairobi is larger but I way filthier and disorganized in comparison.

WHY IS VISAS TO BRITAIN AND USA vital to the LOW IQ political elites in Kenya???

BECAUSE THESE ARE THE POWERS who control resources and events in Kenya! The Kenyan elites are not independent thinkers; they are remote-controlled by the real men from USA and Britain who make the policies the 99.99% of the subdued Kenya citizens must be governed. The riling elites in Kenya are loyal to USA and British power elites! USA and Britain decide the faces of the Kenya Black African elites who must be in power to control the crowds!!!

Kenya is not an independent NATION! Kenya is foreign ruled through its African ruling elites!!!!